He got way worse and now maybe I'm seeing signs of improvement?

After I moved him to the couch last night, he didn't move. When I'd stroke him, he didn't object but didn't really respond. The Smalls and I went to bed. I woke up about 2 and checked on him in the living room and he was the same. I carried him into the bed. He didn't seem to mind but also didn't seem to care. The Smalls snuggled up next to him.

I woke up a lot all night to check. No change. I skipped the swim and finally got up about 6:30. He had moved off the blanket a little and when I stroke him, he responds. I quickly lifts his head to look. I can, fairly easily get a purr out of him now. I moved him back to the sofa and he even sat up for a few minutes. And now he's raising his head to look around without being prompted.

But, he has really walked anywhere since 6:30 last night and hasn't had anything to eat or drink since about mid-day yesterday. I put a nibble of food on my finger and he was having none of it.

The vet's instructions were to feed him small meals often and watch him over the next 24 to 48 hours. She was not my favorite vet of the bunch. But that could be because she didn't fix him.

The Smalls is taking car of him now. 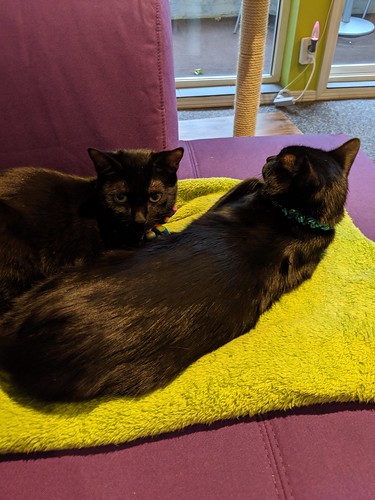 I just got a little bit of water in a bowl and put it under his nose and he sipped a little! And then I put it beside the blanket and after The Smalls got his silly nose out of it, Biggie got up and drank. 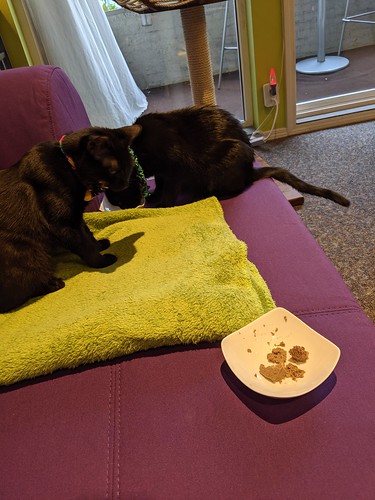 And THEN he got off the sofa and went over to the water fountain!!!!

This is Big for Biggie. He's now resting over by the water fountain.