This morning, I couldn't get the iPod Shuffle to skip to the next episode of This American Life, so I switched to the book I had loaded in which was in a different playlist so I could at least get there.  (The tiny shuffle is perfect for swimming but blind controls are a challenge.)  Anyway, the book is short stories by BJ Novak.  I had heard him interviewed a while back and it sounded like some of the stories were good.  Well, they are.  They are nicely told and fun and a couple that I listened to this morning while I swam were nearly dangerous.  Two, in particular, had lines in them so funny that had I been drinking something there would have been a spit take.  As it turns out, when your head is under water, a spit take works out to be more of a giant unexpected chocking gulp of water.  But, well worth it.  The book is One More Thing:  Stories and Other Stories.  I can't wait to hear more.

I just read that the Big Bang Theory has been renewed for 3 more years.  Yikes.   I love the show. I have from the first episode but they are going to have to double down and really work hard to keep it fresh and good for 3 more years.

My dissolvable stitches are now 1 week old exactly.  I am ready for them to dissolve.  They, apparently, have different thoughts on the subject.  My tongue, at least, has fun playing with them.

My tax refund is stuck.  The bar on the Where is My Refund chart hasn't moved a bit.  But, my HSA account which was a bitch to get closed has, apparently, now been shut down.  I haven't seen the check. My main concern there is how much in fees they will charge me.  They said $0 but I don't trust them one tiny bit.  It will be nice to get both that $5,500 and the $1,500 checks into my savings account.  That account has been looking a bit anemic. Also it will help that my expenses should be down a bit more than usual this month, i hope.

Amira and her daughter are here this morning cleaning my house.  It's already smelling fresher.

I might go out in a little bit on a yogurt hunt. Last weekend

ljtourist told me that while he was in Tillamook, Oregon recently, he got to taste their new Green yogurt and it is wonderful.  So now I'm a bit obsessed with finding it.  I have two likely spots in mind - based on their customer demographics - where it might land first.  But, right now the sun is out and painfully bright.  I might just be kinder to my eyes and stay inside and go yogurt hunting tomorrow when I have to be out anyway.

I found this photo on Twitter this morning. It is amazing. This is a couple of blocks from my house on the day of the post SuperBowl rally.  I know it happened. I was here. And, still, it's hard to believe. 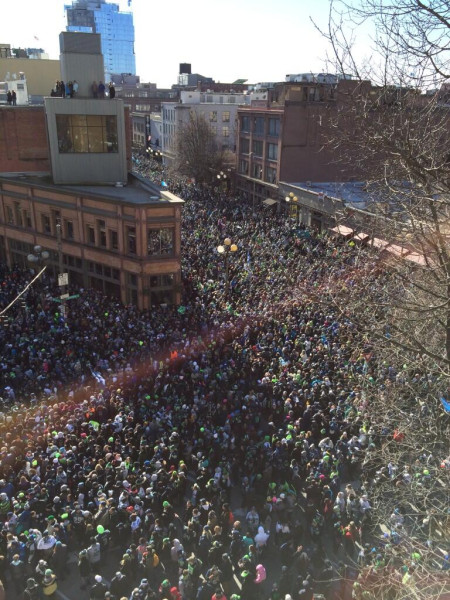 Tonight is the first TV Mariner broadcast of the season - well, pre-season anyway.  Spring Training games are always so weird to watch on TV because the setting is so different and I don't recognize a lot of the players.  But, my favorite announcers are back this year and will be on tonight and it will be fun to catch up.
Subscribe