When it all works out...

I did get on top of the bathroom.  There are 2 drawers and then the UnderTheSink.  The UnderTheSink isn't sooo bad but the two drawers...  So I started with one.   As I finished it, I remembered why I let it go, it really kills my back!  So I was going to go sit for a bit when I checked the tracking number again and got DELIVERED!!!  The rest of the bathroom can just wait.  Thank you! 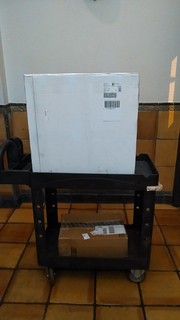 I started with the smaller box.  There was the motherboard box (with discs and warranties and extra bits and bobs) and then 2 boxes of red box Graham Crackers and 2 packages of Smithfield Country Ham. 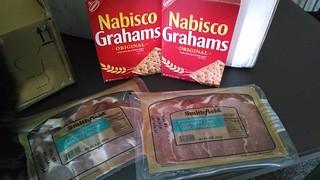 When we were in college and my Mom would send us stuff, she always popped popcorn and used that to cushion whatever it was she was sending.  (This was way before Styrofoam packing crap.)  Years later, she was somewhat horrified to learn that my brother always ate every last kernel.  "It wasn't for eating!!!!" she told hi.  It because a family thing.

A month or so ago, I had to send my brother something and the box was too big.  I had a basket full of random k-cups that I had acquired various ways.  These were the ones I'd culled the good ones out of.  So I tossed the k-cups into the box.  He and his techs had a fit over my k-cup discards.  My brother called it the New Popcorn!!

Now he's raised the popcorn bar way way way high.  I love the ham and I love the graham crackers.  And neither are available anywhere near here.  YUM!!

Then I pulled the CPU box out of the big box and found a bottle of Apple Juce!  We discovered Apple Juce at last year's CES.  This stuff is screen cleaning gold.  Yes, alcohol and water works but this stuff WORKS.  He just started carrying it at his store so he tossed in a big bottle for me.

So... before I even got to the computer, it was Christmas.

But, then I got to the computer and it was wonderful.  The new case is so bright and fresh and light weight with 589 ports.  I have 12 USB (half of them are USB3) ports I don't have any use for!!  I have a front e-Sata port!  I mean if this sucker was a nickel hooker she could still make $1,300 an hour.

And fast way fast.  It even boots up fast and it's Windows 7.  It's sooo nice and it's sooooo pretty.  They forgot to put in the wifi card which really annoyed me for a bit but I got over it.  I ordered one from Amazon and treated myself to overnight delivery.  So it will be here tomorrow and I can remove that green network cable. 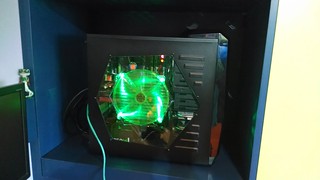 Zoey's new favorite spot is in the cabinet behind it. 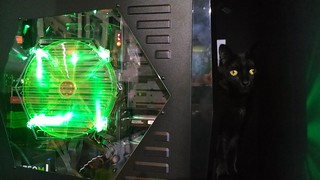 I spent most of the day getting it all set up the way I want. Installing stuff and setting this and that.  My old PC had disk drawers that were a bitch and a half to open.  Getting a CD in or out was a major hassle.  Now, all it takes is a light tough of the fingertip.  Heaven.