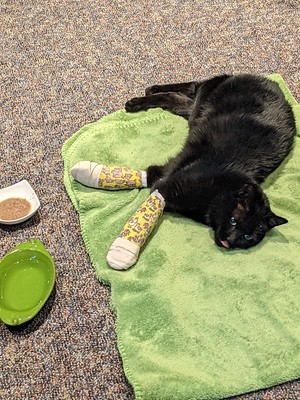 We had a good night last night. I think we're very close to moving back to the real bed. I laid out a large box next to it in hope he could make it all the way up. I sat him on the floor and got onto the bed and played games on my tablet while I listened to my book. After a bit, he got onto the box but then just settled in. I need something a little higher and I have some ideas.

But sleeping on the floor is really not bad. The only issue is getting up. But, I manage. I laid out some food for him next to the bed which he didn't eat so I put it under his nose this morning when I got up. The dish was empty when I got off the treadmill.

I've been carrying him from room to room so he has not walked that much. Before this, he had no interest in being carried anywhere any time any how. But, now, he seems to be ok with it and it does not seem to hurt him. Also before this he had never begged for head scratches from me. (He was quite tolerant, appreciative even, of them from Frank and my brother - just not me.) But now, he's all over a little head nuggy and cuddle. I do not mind a bit.

We have a grocery delivery between 12 and 2 and that's it for the thrills du jour. I may do laundry. I might not. I will be doing head nuggies.

And a kitchen note. Yesterday I made more breakfast burritos. The larger tortillas worked out fine. Better even. I filled them with egg, cheese and corned beef hash. I had one this morning and it was fabulous! I have five more already made!

Biggie has never once sat in my lap until today. I took him down to the litter box but he wasn't interested. So when we got back to the living room, I put him in my lap as I sat down in the recliner and we watched Bob Hearts Abishola.

Then the groceries arrived and I put him gently on the ground and got up. It took him less than a minute to not only scramble into my chair but on top of my crochet! And I'll bet he wants my lap back, too.

But I'm going to eat first. I'm waiting for the chicken to perk back up in the air fryer.

And it just dawned on me that he scrambled up onto the hassock to get into the chair. So I rolled another hassock into the bedroom next to the bed. I think we'll sleep there tonight so I can put the sewing room back together again. 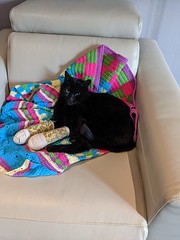 I'm not unhappy about having a lap cat but it could interfere with my yarn projects...

The movie ended (Starling on Netflix - not bad) and I had to pee so I put Biggie on the floor. He cried. I took him over to the food dish. He rejected the food. And cried some more. I went to pee and he immediately, not even waiting a second, turned and hopped back into the chair.

I took the food dish and put it under his nose and he ate so I let him eat a little and then put it back on the floor thinking he would follow. NFW. He's not moving out of the recliner ever again in his whole life. My recliner!

He's not allowed to have any food after midnight in case they need to sedate him tomorrow so he's going to be one hungry tiger if he doesn't come down off his throne and dine. But, whatever.