Biggie actually tried to get up to the kitchen counter which his food usually is. Poor guy didn't make it. I carried him to the food in the bedroom.

He actually ate a little last night and drank a little and tipped the water bowl over and put his bandaged paw in it. "Above all do not let his paw bandages get wet," said the tech. Good going, Bigs. It wasn't wet long.

All this happened next to my bed where I did make steps in case he wanted to get into the bed. I was exhausted so turned off the lights really early. About four hours later, I woke up and he was not where I had left him so I got up to check. He was next to the litter box and had no color on.

I found his collar in the old litter box where he had tried to go. I moved the litter back into the box and he actually did get in there and out with his collar so ok. I put his collar back on and he didn't fight it.

I pulled the mattress off the day bed and set it up next to him and got my pillow and blanket and turned out the lights and sacked in there. In a few minutes I felt him hobbing over to me and then over me and then settling into the crook of my knees. And we finished up the night together.

I got up this morning and did the treadmill and did some internetting and had breakfast and he's still there. I put out some food and even tried to get him to take some from a spoon but he's not interested. 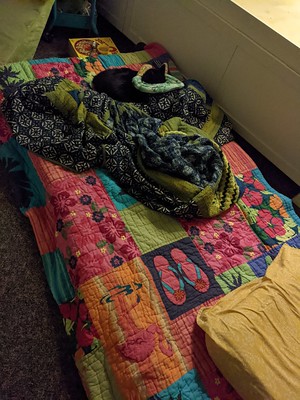 He's not moving. When I go back to check on him, he's awake and alert but not moving.

I got a lengthy email of instructions from the vet. Mainly stuff to expect and stuff to look out for. I am glad it's Friday so they are open and I can call if I have questions. They also did give me an emergency number for the weekend.

The house is now a wreck. So. I think I'll pick up and tidy up first. And then shower and if he's still not moving, then I'll pick him up and move him in here so I can at least keep an eagle eye on him.

Fortunately, I do not need to go anywhere today. So we'll just hang and heal, hopefully.

Biggie's been a lump on the floor all morning. He did not even move until a couple of hours ago. He won't eat anything - out of a dish, off a spoon, off my finger. I've tried treats he loves, food he loves, I even made kind of soup out of soaking his favorite kibble. Won't take a lick.

He's on high doses of long acting medicines - pain killers and antibiotics and I'm sure that, with the trauma and the sore mouth and jaw is not appetite inducing.

The vet's instructions say he must wear the collar to keep him from picking at his bandages. I decided to take it off and see if he would do that. Nope. He licked them a little but not much. So I've decided he does not have to wear it for now.

Then, finally, about an hour ago, he sat up and groomed himself a little and looked around. And then hopped into his recliner!!!

meowmensteen, his bird loving friend, caught the action on the web cam (susandennis.rocks).

Because it's Friday, I'm probably going to call the vet about 3 pm if he does not eat anything before then. I'm sure it's fine and he's fine but I'd rather call today when they are open, than frantically tomorrow.

Now he's perched up in his massive chair on his own crocheted blanket like royalty. Which, of course, he is.

So. Just before 3, I dipped my finger into the creamy treat stuff and offered it up and he licked the finger clean but he was having no more. But, it does seem to sniff and decide each time so it's not like he's just on strike.

Yes, I called the vet's and they were great. They asked me a ton of questions... is he doing this or that or showing this sign or that and at the end they said to watch and wait. He's got so much medicine in him and so much healing to do. They were very encouraged about his demeanor. His ears are perked up and he's moving his head and flaps a bandaged paw now and again. He actually hasn't even slept much. We've been watching TV.

They said to keep trying and try everything. Oh right, I need to try tuna juice. But, they said to put more store by his behavior and general perkiness.

I did feel a whole lot better after talking to them.

Now, 3 hours later, he's looking around - probably for birds - but hasn't left his recliner and hasn't licked anything else off my feeder finger. Maybe tomorrow. Stay tuned!
Collapse