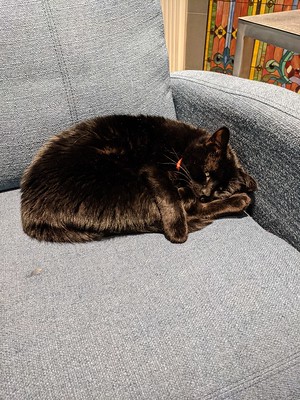 Biggie is really leaning into his recliner. This was last night. I love the leg folding.

Still no word from the house cleaner. My plan is to leave as if she was coming as normal and run my errands. I'll keep an eye on the web cams.

The Mariners announced yesterday that they have purchased a gynormous warehouse across the street from the stadium (so just down the street from me). It was a working warehouse until about a decade ago when the building was purchase and a brew restaurant moved in. In the beginning they had good food but towards the end, they just had booze and drunks. They shuttered forever at the beginning of the pandemic.

Now the Mariners have bought it and plan to turn it into a fancy dancy year round restaurant with baseball themes and lordknowswhatallelse. The plans look like it's going to be a wonderful spot and also a nice addition to the neighborhood. They are planning to open mid next Summer.

Also in local news... My parking space is under the ground level of the building. It's the standard underground urban parking... down a steep ramp into the spaces. Yesterday, I saw a BMW SUV back in - BACK IN! Back down the ramp and then into her spot. She did have one of those backing in cameras but geesh. I don't get why she would even do that. Condo people are weird.

I started watching Maid on Netflix yesterday. It's oddly compelling. And I'm not sure why. But, I'm sticking with it for now.

Well, that worked out nicely. The house cleaner finally texted me that it was her birthday and she's not coming today. Can she come next week? It would piss me off EXCEPT it's the perfect way to end. I told her let's skip this month and I'd pay her as a birthday gift. I also told her that I was going to end house cleaning next year. So November and December would be the final months. I just got a 'ok, thanks' text. So done!!

It's been a nice run but I'm ready to quit. I can pick up the slack and I will. Me, the robot vac and scrubbing bubbles can handle the job.

Oh! a book I want to read and had on hold just came up for borrowing! Very excellent timing for once. I'm about 3 hours away from finishing my current one. I've been reading Liane Moriarty's Apples Never Fall. It's a good story but really more of a variation on her others.

Ok so. Now I don't have to leave but I do have the errands I had planned plus some cleaning! So I'd better get on it!
Collapse