I fell asleep last night in the middle of the 8th inning. The Mariners' game was lackluster at best but it was good to have baseball back regardless. The score was 5-1 Giants. This morning I got onto the treadmill and turned on the recorded game picking up where I had left off. And... what a surprise I got. They took the lead in the bottom of the 8th in dramatic fashion. Then the Giants tied it. In the 10th, the Mariners won when the Giants walked all the batters they faced. It was just lovely, actually and amazing.

That's going to be my new treadmill I like it. jam now. Picking up the game wherever it was when I fell asleep.

Also fun yesterday was all the coverage that the Mariners got on local news. Seattle is a football town first and a soccer town second. If/when the local TV news remembers we have a baseball team, it is warn that there will be traffic issues in the evening commute. BUT last night was the first time any of those sports had had actual people in the actual stadium in forfreakinever and all four local news stations covered the shit out of it. Several reporters on the story clearly knew zippidy doo da about baseball or the Mariners so the coverage was also fairly hilarious. But, at least one for evening, Seattle baseball was in the spotlight.

But also, this morning, Biggie bit me again. Inches from the last bite on my hand. At least this one was not his usual hard chomp. That last one was sore for more than a week. This one isn't even sore at all and the skin break is very superficial. He tried to bite my leg while I was on the toilet and failed so he got my hand when I sat on the couch. I did get him with the water spray and some strong language and he did not try again. I sure wish he'd get a new hobby. In general, he seems to be in a mood today. Wonder what happened. Quit smoking? Girlfriend dumped him? He's not talking. Just biting.

No plans for today.The house has gotten a little untidy in spots so I'll fix that. I still have a teriyaki jones so I might do a lunch time run to the other place. Or I might just eat what I've got here which would be a smarter deal anyway. 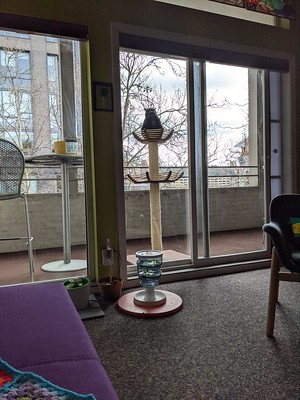 I have not seen Biggie Bitey in the monitor again but this morning he moved that pillow out ... again. So I guess it's out for good now. 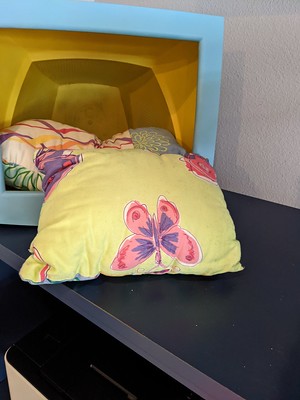 I did go to the other teriyaki place but I got mongolian beef and it was excellent and the process was easy - it's a straight shot, no traffic between here and there. They have a big menu including Vietnamese food. I'd only ever had their teriyaki before. I'll be giving the rest a try now. And, they don't even look at my card any more when I swing by KK for my vaccination donut.

MLB just ripped the All Star Game right out of Atlanta on account of Georgia's new voting rules.The MLB pisses me off most of the time - but this time... they are delighting me. This is impressive. The Atlanta Braves are pissed. Of course their owner is a major contributor to Make America Great Again which is poetic, honestly.
Collapse