Today's outing is the Goodwill Store. I have a bag + of stuff to donate and then some shopping. They are having a linen sale which, I hope, means they will have more out than usual. I'm still not sewing much but could get inspired by the right sheets!

And then there will be a baseball game this afternoon.

The house cleaner comes tomorrow so I need to make sure everything is put away. It mostly is. Biggie ensures that all the little stuff is safely inside drawers or behind doors. And the bigger stuff generally annoys me enough to keep it put away. So it's mainly just walking through with an eye out for stuff. I sent her a text about not needing to vacuum here any more.

Robby is running right now. I stopped him with the phone app so I could adjust the virtual wall around the fireplace. Biggie ran right over to investigate. He was a little flummoxed when I started the vacuum up again but has now recovered carefully watching from his perch on the table. 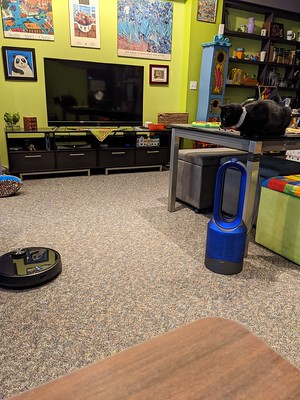 I was planning out places I want to go and things I want to do and, it turns out, that the list is not nearly as long as I imagined. Google explained that some of my favorites are gone. Sigh. But, I'm still on a one outing a day plan. I may end up just walking around the block for the outing but, I'm fine with that. I considered expanding my treadmill time but decided that was not a good plan. I am able to do the treadmill every single day but only because I promise myself it's only for 25 minutes. Even 30 minutes seems like a treadmill too far.

In my world, doing what is good for me is only acceptable if it points directly to my being able to live the life I want. I don't do most medical tests, for instance, because if something is found, they will want to treat it and there goes the life I want. I'm perfectly fine with a shorter, better life. I walk on the treadmill because it helps me have the stamina to do what I want. I'm not willing to spend a lot of time and effort doing stuff I do not want that 'may' pay off someday. These are decisions only for me and not for everyone.

I am having trouble concentrating this morning. Shiny!!Syndrome. My attention span has catch and release - itis. So I think I'll just stop trying, go get dressed and head over to Goodwill.

dadi convinced me to try those bags of little avocados instead the big ones. I've now done it twice and I'm totally converted. Tonight I had the best little salad of cubed roma tomato, cubed tiny avocado, a a bit of chopped onion. I nuked a few steak slices and it was a perfect dinner. I may do it tomorrow and substitute those chicken bits I got for the steak.

I did not get a picture of Biggie in his tree today. He was out there this morning but it was still darkish and I get that weird glint off the window. So I thought I'd wait until later. When later came, he was in a very long nap on the newly changed bed. Clean sheets and clean, new duvet cover that I scored at Goodwill. By the time he got up, it was dark out. Oh well. I missed another day, already, too.

I can only get better from here.

It was a lovely day. My Goodwill trip was very productive. And tomorrow is a swim day!
Collapse