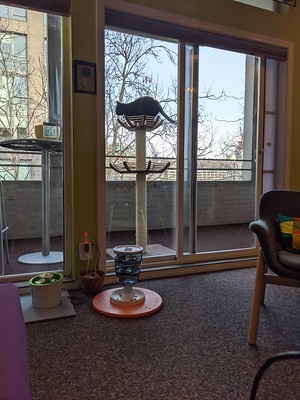 So the medicine my doctor prescribed says, right on the bottle, "This drug may change the color of your urnine." I was initially annoyed that I was not offered my choice of colors. Now I'm just disappointed that I got no color change at all. Nothing. I wonder if I can get my money back from Costco. Will they need a sample? Hmmmmm

But, mainly I'm disappointed in my lungs. They are not happy about yesterday's swim. I knew it last night. I got up to pee (the same color as always) and was out of breath after the 10 steps from the bed. This morning I feel very COPDish. It's not horrible but it's a clear indication that I will not be swimming on Saturday. I think I'm going to assume that there just needs to be longer recovery times between swims. I'll try again next Wednesday. I could live with once a week. Better than nuthin.

I sent Robby out again this morning just because I could. It was working in the sewing room when I got a message...

I walked back there to rescue him and the voice was saying "Mayday! Mayday!" It cracked me up.I got him free and blocked that bit with a virtual wall and he was fine. Although, in retrospect, I think I should have gotten a "Thank you."

I put regular kibble into Biggie's new food puzzle this morning and he dug in and got some of it out but then, clearly, not into no treats, abandoned the project. He has standards. I'm impressed.

My nephew and his wife (Iowa) wanted to come visit in September. I love that they want to come but I was a little wary. Originally, he said July and I said no. In July, all there will be to do besides walking outside will be eating in my kitchen and staring at each other. What little there is open to do takes reservations and planning and may be shut down before you even get there. I thought September was a bit ambitious but way better than July. Finally, last night, he asked if maybe September was too risky and I said yes, I really thought it was. Whew. He said they were shooting for 2022 and maybe twice. They have a cruise which leaves from here in September but maybe they would come in the spring as well.

I remember my Mom saying one time how every flattering it was to have young people who wanted to hang out with you. Yet another thing my Mom was right about.

I've got nothing on the calendar for today. My lungs will be happier, I think, with a day of Crochet On The Couch. Maybe there will be a load of laundry done.

Biggie just celebrated Robby's return to his charging base.

I'm feeling way less COPDy this afternoon. But, I canceled my Saturday swim anyway. I'd rather give up one swim in hopes of enabling the once a week plan.

I was totally correct about the Costco pizza. I pulled two pieces out of the freezer and air fried them for 8 minutes and they were perfect. This is so good. I'm perfectly fine with making a Costco pizza run in return for a freezer full of delicious. Best deal I've had since the two Papa Murphy's closed leaving the closest one now a good 30 minutes away.

The new robovac has three levels of suck - my first two runs were at the least (and supposedly most quiet) suck level. For giggles, I am now running it again at the suckiest level. I'll be interested to see how much more, if any, battery it eats up. And then to see what's in the bin when it's done. It's not noticeably louder.

The house cleaner comes a week from today. I think I'm going to tell her to just leave her vacuum at home. No need for her to drag it here when everything has been sucked up already.

This may well be the end of the vacuum discussion in this journal for a while.

I am crocheting a daffodil. I may do a bouquet. But, first, I need to go fold laundry.
Collapse