In the past, the lab has sent my test results to me on the same day. Yesterday, I got about half. I did get the one I was looking for AIC - 56% Ha! Missed pre-diabetes again. yeah! I did not get the urinalysis which, of course, made me think ooops. Not enough pee in the cup. Crap. Maybe I can talk him out of it...

This morning, my phone rang. I did my answer and don't say anything trick but clearly there was someone there... So I said, hello and... turns out it was my Doctor's office calling to tell me I have a urinary infection and he wants me to pick up a prescription for it today. I tried to talk her out of it. 1. Zero symptoms. Not one single one ever. (I googled them and, nope, for sure, none.) 2. I haven't had a urinary infection in 50 years. But, she wasn't buying what I was selling.

On the up side, I guess I peed enough!

I guess I'll be going Costco'ing later on today. Ugh. No senior hour. I'll have to mingle with the youngin's. I did want to get more of that steak I got last time so cool. Cragep Didly. I just discovered that the Costco app for the Pharmacy is broken. Buggers. I love Costco but their online situation sucks donkey eggs.

Last Fall, my pet company Wyze, came out with a robotic vacuum. I had a robotic vacuum that did ok so I didn't buy the Wyze one. Then they ran out. Then I decided I wanted one anyway. Then I got an email that they had more stock. So I bought one and it came yesterday and it's amazing.

It maps the whole house and then cleans room by room up and down in a very orderly fashion. But, the most fun is that it operates from an app and you can watch it clean!!! And then it gives you a report. 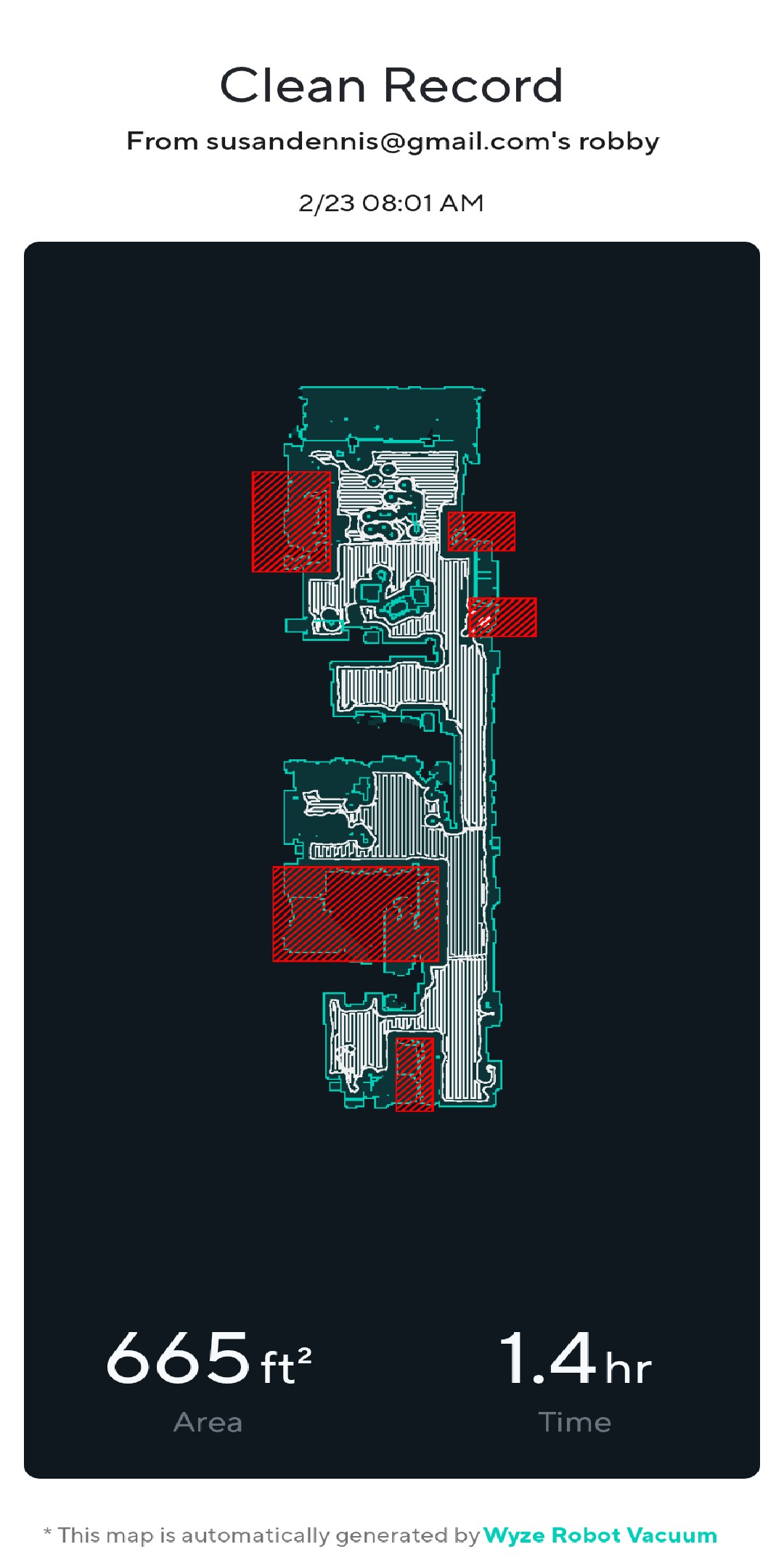 The white lines are where it cleaned. The red boxes are barriers I put in there so it won't try to go into places like the bathroom (throw rugs), under the sewing machine (pedal and cables), etc. It used up 80% of a battery to do the whole house. OMG I love this thing so much.

The bin that captures all the suck, is oh so easily located just under a lid. It's so easy and intuitive that it took forever for me to find it. I kept trying to figure out from the bottom which part you had to pull. You lift the lid and pop out the bin. Easiest ever. Oh and no beeps. It has a voice. It tells you when it needs rescuing, when it's charging, when it's starting out and when it's done. And, of course, you can schedule it ... by room. I'm quite jazzed about it.

So... now that I've vacuumed the whole house already today...

Oh and BTW Biggie is not a fan of the new sucker. He's quite Wary and now that it's resting, so is he. He was back to his snuggly self last night with no midnight shenanigans. I hope his hijinks are done.

This is not the daily photo but an extra edition because I just realized he makes good shadow. 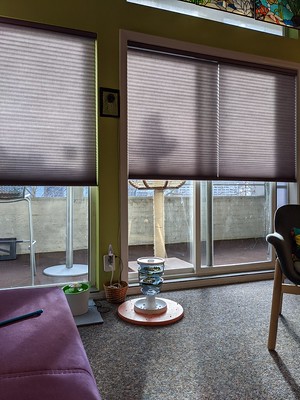 The whole Mariners CEO festuche blew right up yesterday. He's gone and fallout is falling out. Great way to start the season.

Today is a swim day!! My pool time is 11:30. I actually just reviewed the new regulations to see if urinary infection was on the list of things that would keep you out of the pool. Nope. I'm still a big fat No to their list of symptoms. So swim it is! And this time, I'm leaving here with lots of time to spare.

After my swim, I'll call Costco. If no prescription, I'll go over to Ezell's across the street and get more okra and maybe some fried chickenlivers. If prescription, then Costco run.

Big day here! And me so ill with this imaginary "urinary infection"....

I got to the pool in plenty of time and they let us in early which was nice. I really like COVID swimming. My technique was way better this time. I did a mile and it was fab. I shared a lane with an old guy who only lasted about 20 minutes. That's the beauty of the lanes marked 'easy'. Those people got no stamina and so I get the lane to my self for most of the swim. It really was a glorious swim. My arms are only a little sore - not nearly as bad as last time.

Next swim is 9:30 Saturday morning. I think my lungs might be ok with this pool as long as I keep it to two swims a week. I'm hoping anyway.

When I got back to the car, I called Costco. Yep. They had the prescription and they had the stuff in inventory - about 30 mins til it was ready. Ok. I headed out. When I got there, I got gas. Then I headed in for the pharmacy. Not ready yet. So on to the steaks. Nope. It was not easy to find someone to check inventory. Bad news. No steak. Good news. VERY POPULAR Item. Will be back next week. Yeah!

Picked up the prescription - antibiotics. Ugh. So then I picked up a probiotic. And headed for the pizza. I ordered a whole pizza and waited for freakin' ever. That place was packed to the gills. Senior hour is sooo much better. While I was standing there way less than 6 feet from the other people waiting (not their fault) I all of a sudden remembered that I must reek of chlorine. And, under my long hoodie, I was totally, completely, hilariously naked. That tickled me no end.

By the time I got back to the car, I was beat. By the time I got home, parked, came up the stairs and then up the elevator to my own condo, I was really beat but I still stank so into the shower. And then I had a couple of pieces of pizza. I've always like the costco pizza but this not so much. Maybe it wasn't hot enough. It sure wasn't crisp. BUT I have a ton left for the freezer and I know heating it in the air fryer will crisp it up bunches. A good buy at $10. Probably 5 meals total and a snack.

Now I need to get up again and get that pizza into the freezer and deal with boxes. Biggie can do what he wants tonight, I'm pretty sure I'll be able to sleep through the apocalypse. 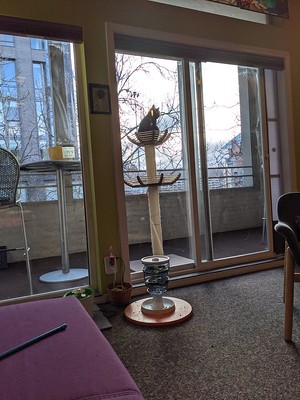 Last weekend Biggie was bugging me to entertain him and I got spendy and ended up buying him two puzzles from Chewy which arrived today.

He had this one completely emptied in no time. I could have put the treats on a plate and he would have been as challenged. 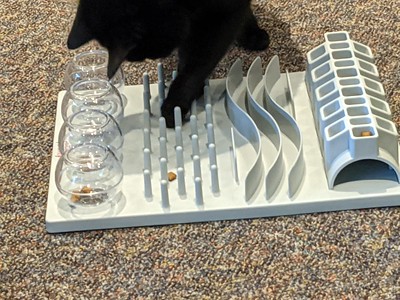 Plus it's big. I don't mind returning stuff one bit to Amazon but feel guilty sending stuff back to Chewy. Why is that? Well, I just checked and it appears that they are not big on returns. Oh well, some Goodwill cat will love this.

The second puzzle is an entirely different story. It is smaller and prettier and way more of a challenge. 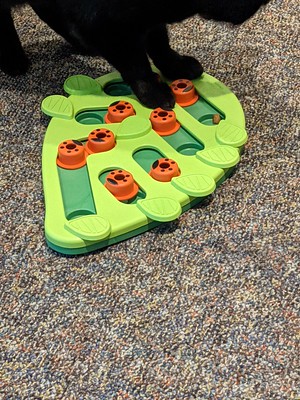 The treats go into the indentations (you can see one he found there) and then you either push the red cap over the top OR the leaf over it and then the red cap next to the leaf. In the latter, he has to figure out to move the red cap to get to where the leaf will move so he can have the treat.

This one stumped him and there is still one treat in there he didn't find yet. I suspect he's also probably treated out at this point.

This one is a keeper.
Collapse