Well, the collection of my backup pee was a failure. And even though I drank a giant bottle of water, by the time it came to fill the cup, my donation was minimal or probably not that. The tech said they would try and I left them with my best wishes.

The blood drawer, could not stop the teensy vein she found from rolling and was threatening to draw from my hand (which shoots pain up to my elbow so, no thanks). But, after some needle digging, she finally got what she needed. And, thanks for the large, colorful bruise... yet another reason to avoid a hand job.

On the up side, I got in early - their first customer of the day - and home by 7 and that included a swing by McDonalds for a sausage biscuit. Of course I had to pee the minute I got home. Such a waste.

I skipped the treadmill this morning. I may get on it later. I may not. I am the boss of me and the boss has not made any decisions on this matter.

The President of the Mariners spoke to a Rotary Club last week and threw open his kimono. Some dude took copious notes and released them yesterday. Pretty bad. He told stories with names and made remarks about players' English skills and even mispronounced a players name and then joked about it in a fairly disparaging way. Bloggers are of course, eviscerating him but I haven't seen where he's stepped up to deny any of it. Ugly. Great way to kick off the season.

(He apparently did apologize last night. But, Twitter is a long long long way from accepting his, honestly pretty lame, attempts at amends. WTF, dude?!)

Biggie is going through something. For the past few days, he's been more Biggie than usual in nearly every way. He, once again, roamed the house last night instead of snuggling next to me. He knocked my phone to the ground and started again on the framed pictures on the wall. Over all he was not as destructive as the night before but still. This morning, he's manic - zooming everywhere. I hope this is a quickly passing phase.

I want to go to Costco but I don't quite need gas yet and if my doctor switches up any of my medications, I'm going to have him send them to Costco so I think maybe I'll just hold off going until Friday or next week.

As promised, Katie turned on my extra channels. I have Tivo set up to stockpile some recordings but I don't have time to watch. I still have 5 hours left on my book which is due in 3 days. So today will be crochet and book listening mostly, I think. While I wait for word from the lab about whether or not they need me to come back in and pee again. 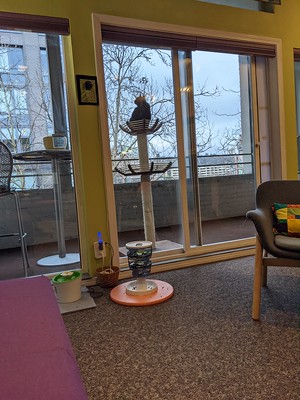