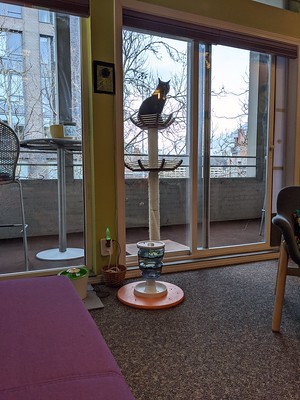 Biggie had a major manic episode last night that lasted until this morning. About 30 minutes after I had gone to sleep, he started tearing ass all over the house. Climbing onto the bedside tables and trying to knock pictures off the wall... over and over again. Jumping on the bed (and me) and jumping right off... over and over again. Finally, after knocking my phone charger out of the wall socket and taking one last run at the pictures on the wall, he settled down. Only to start up again with a repeat of the whole thing from 4 until I finally got up at 7.

It's now 8:30 and he's gone to take a nap. In spite of his shenanigans, Fitbit says I slept well and Fitbit knows so no harm but really. I am adding a spray bottle to the night stand tonight.

I watched a movie yesterday, I Care A Lot on Netflix. It's been bugging me ever since. Both the idea behind the plot and the way the story went. Preying on the elderly. The main elderly who got preyed upon in the movie was one year younger than me. I'm just not a fan of that whole preying concept.

Tomorrow is labs day which, annually, is chock full of stress for me. It's silly really. But, it happens every year. It's a fasting blood test and pee in a cup.

The latter. If you have a penis, pee in a cup is NBD at all. Even if you don't have to go, you can donate enough to make them happy. But, sans penis, it's a giant mess and if you don't have to go, you have to come back. Several years ago, I finally invented 'backup pee'. When I get up tomorrow morning, my first pee will go into a plastic bag (why they hell they don't provide those instead of cups has always been a major mystery to me). The bag will go into a tightly lidded container that I will smuggle into the lab bathroom after they give me my cup to fill. I actually haven't had to use the backup pee in a couple of years but just having it relieves half the stress.

The other half is diabetes. My blood numbers have kissed the edges of pre-diabetes for years. My doctor always seems a little disappointed that I didn't get there. He so wants to put me on a restrictive died. But until I cross the line, he can only threaten. Ha! This year, I have a secret weapon. The graph of my weight loss. I think, as long as my numbers are below pre, that graph is going to change his tune.

I don't really have that much of a problem doing what I want in terms of eating, instead of what he says but he's such a good guy, I really don't want to defy him.

I'll go in first thing in the morning and do the labs. I'll get the results by early afternoon. Then go in to the doctor on Thursday and not have to worry about it again for a year.

Turns out, I was a little premature with turning on the Mariners cable TV. The first game is a week from today but the first televised game isn't til mid march. So, I wasted about $30 bucks by getting it turned on too early. Oh well. I'll have to watch a bunch of MSNBC and CNN and Food Network and HGTV to make up the difference.

I feel like I should go in the bedroom and play loud music and turn on the lights in the closet where Biggie is napping and generally make it impossible for him to sleep. But, I won't because I am enjoying the peace and quiet.

He annoyed me all night, and now I'm getting him back.

I got this ball with holes in it for cat treats. You can open up three holes or two or one or make that one hole really small. So yesterday I put treats in it and opened up the one hole and he emptied it immediately. I made the hole smaller and smaller and he kept at it. Today, I just put his regular food in it and the hole is the smallest. He can get them out but it takes work and it's cracking me up.

Two can play at this game, Mr. Biggie!! 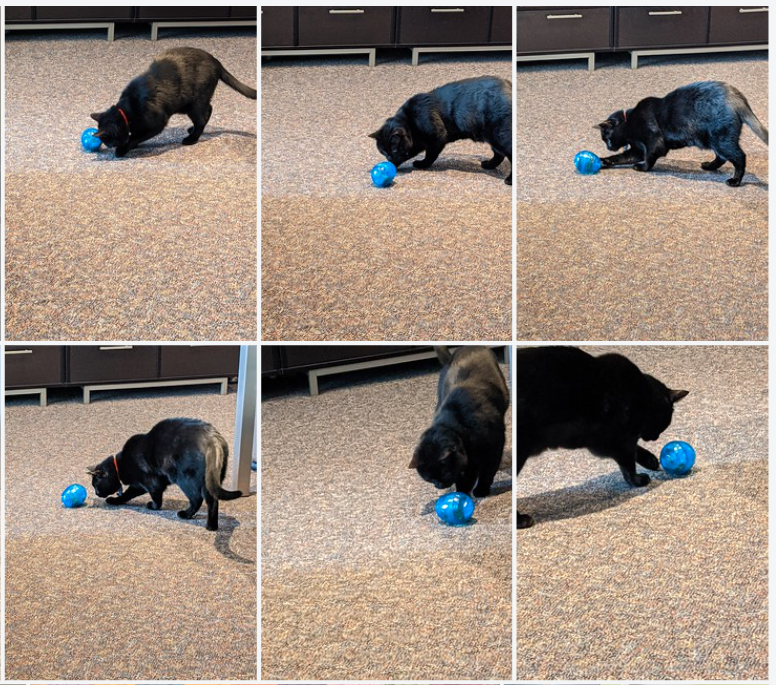