First up is the chimney sweep. I'm waiting as long as I can to unhook the fireplace screen and get it ready because I know You Know Who will have a field day playing the ashes and tracking them all over the house. I could shut him up in the bathrooom for the day. I do not have the heart to do that. So ashes all over the house it is! The robot vac is charged up and ready.

The online NY Times has, in the middle of the front page, a little COVID-19 section. Every morning, it tells me the status on my own neighborhood. It has said that King County, WA is VERY HIGH RISK for weeks and weeks and yesterday we got demoted to HIGH RISK. Kind of a milestone. Actually, not even kind of. It is a real milestone. Early on, I wondered here in this journal, what the end of this whole mess would look like. I still wonder.

I'm in the middle of a 30+hour long audiobook and it's due back in the library in a week. I think after I finish the fireplace project, it will be audiobook and crochet for me today. Until pool time.

I think I'll go get dressed and get started.

I have a storage unit in the basement of the building. Several years ago I rented it out to one of my neighbors for storage of her business' documents. (Something in that area of the basement does not like my lungs so I can't even go in there and I don't need more storage space.) She just sent an email asking if she could continue renting through the end of 2023 and prepay for the entire time with a check next week.

It's so weird to me to be making plans that will be in place when I'm nearly 75 years old. But, maybe I should treat it as an insurance policy. If I die before the end of 2023, it would fuckup our arrangement so I need to not die before then. OKdokey!

The fireplace turned out to be not nearly the mess I thought and, hilariously, Biggie took one look and went to eat and never came back. There were some exceedingly old composite fire logs in there that are now in the dumpster but I must have cleaned out most of the ashes at one point.

The chimney sweep team is working their way down the hall now. They may ore may not get here before time to go swim. Does not matter one way or the other. They don't need my help.

AND... as typed that last sentence there was a knock at the door. The very nice guy did a check and said my set up was clean as a whistle and needed no extra work. He also told me that the ugly glass doors were not needed at all. Code does not even require them. Yeah. I can get rid of those bad boys. I put the twinkly lights back in. The chicken wire came tied with a very nice light gauge wire which I saved and it turns out is perfect for securing the stained glass fire screen to the fireplace so Biggie can't knock it over. I may need to adjust the twinkles but I think I'll wait until tonight when I can see them better.

Nice to have that all finished. I still have an hour and a half before time to leave for the pool. Look out, crochet, here I come.

(And I am enjoying a day off from my hourly stretches. I did the treadmill this morning but figured since I'm swimming this afternoon, I don't have to do stretches. Doesn't make that much sense but I don't care.)

There was a lot of traffic. I should have left the house sooner. BUT they had not let anyone in yet. I was fourth in line. Standing in line in the rain does not have the bite it would otherwise when you are there to get wet anyway.

The entry was a minimum of fuss. Two of the three lifeguards on duty were old timers who have life guarded at that pool for a million years. It was neat to see them. According to Fitbit, I was in the water at 2:33 so not late at all, actually.

They put two people to a lane and split it in half. And they had the usual fast and slow lanes. I got into a slow and shared it with an old man who swam probably 30 minutes. The rest of the time it was mine.

My first few laps were hilarious. Neither me nor my body remembered what to do. But, we got the hang of it after a bit. My form sucked and I was slow as Christmas but I did not care, it was glorious. I swam and swam until they finally kicked me out.

When I saw the Fitbit report, I was surprise I had gotten in that much yardage. Not too shabby for not having swam a lick in 9 months. I shed my suit under my robe so that at least I could get a bit dry and it was fine.

When I got to the car, I had a voice mail from the doctor's office saying my second vaccine got snowed out and I should call for a new appointment. Crapdiddly. I figured I'd just call right then while I caught my breath. I figured I'd have to leave a message or I'd be on hold for ever or I wouldn't get through.

None of the above. The person who answered the phone set me up for the 25th at 2:30. Done and dusted. Could not have been easier.

So, on the strength of that victory, I decided to get fried chicken and okra from the take out place across the street from the pool.

By the time I got home, I was dry and my hair looked and felt like a brillo pad scared into straight spikes. Biggie was so confused. Where the fuck had I been????? I walked right into the shower and that confused him even more. We only take showers in the morning here.

Now I'm clean, my hair has been tamed. I have chicken and okra ready to eat for dinner and I am guaranteed a good sleep tonight. Whew. Next swim is Tuesday! 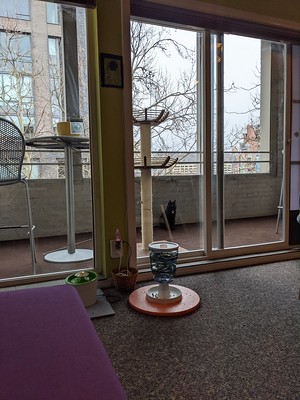