Seeing snowflakes out my window is just the most beautiful calming extraordinary thing ever.

They fell all day yesterday and were falling again this morning when I got up. Just now they are ranging from nice sized to gynormous and feathery. So pretty to look out and see white. When I open my doors, I hear it. The padded silence and it's wonderful.

Biggie is still incredulous. I think he needs a kitty wikipedia so he can look up what snow is all about. 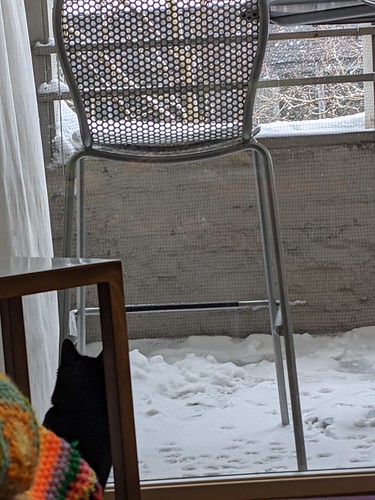 According to the Seattle Weather Blog, "It snowed on Saturday like it hadn’t in over half a century.A staggering 8.9 inches of snow blanketed Sea-Tac Airport—the site of Seattle’s official weather-reporting station—on the first day of a long holiday weekend, making for the city’s snowiest day since Jan. 27, 1969, when 14.9 inches buried the town." I moved here in 1991 and we've had one or two truly spectacular snowstorms, this one clearly is the winner.

It's just so beautiful.

For the past few days, I've been building up an Amazon Fresh grocery shopping cart and it's getting pretty pricey. I couldn't get a delivery until at least tomorrow, even if I wanted one... which I don't. I much prefer to wait until want moves into need and I'm not there yet. I did not do a lot of regular Amazon ordering last month and still, with groceries alone, my cash back bonus was embarrassingly rich.

Speaking of Amazon, I think I'm going to go back to Costco for drugs. Amazon's pharmacy just isn't there yet and it bugs the crap out of me that I have to call for every little question or problem. Email and texts, people! Or, in the case of Costco, in person. I will probably leave the current prescriptions there until they run out and move any new ones to Costco.

Last night, the news hit twitter that my second favorite pitcher of all times is coming back to the Mariners. James Paxton is such a fun guy and great sport and good pitcher. He went to the Yankees but now he's coming home. He's Canadian and there's a whole section in the stadium of Paxton Fans called The Maple Grove. It will be fun to see it back in action which hopefully, it will be sometime this next season.

I think I'm going to go take a hot shower and put on a bunch of layers and then come back and watch the last of the snow fall. 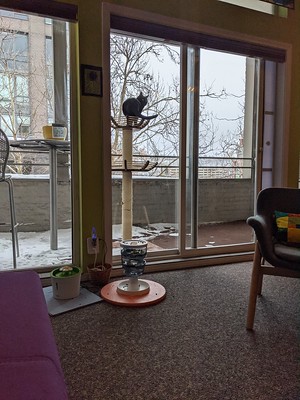