I've been using Flonase now every morning for about three weeks. And I'll be darned if it doesn't seem like it's working! I started keeping daily counts of how many tissues I used and the number keeps dropping. My nose still runs when I eat but most of the rest of the day, it does not. This is a fucking miracle.

Somewhere on The Internet, I picked up a waffle iron cleaning trick that is excellent. My little waffle iron has a non stick coating but some stuff sticks sometimes and I like a clean iron. So, right after I unplug it, I stick a wet paper towel folded in half or thirds on the spikes and close it. Later, after it's cold, the steam has moved any gunk to the paper towel. Easy breasy clean up. So smart.

BTW, I did have a major waffle fail yesterday. I stuck a mini Krispy Kreme donut in there. What a mess. It tasted good but not good enough to make up for the mess.

Some areas right around here have a bit of snow this morning. Not here. We have rain and 38f (3c) degrees. And the rain is drying up.

I do think that I'm going to make a Popeye's run today. I just feel like chicken. Plus, I like having a supply in the freezer at the ready. The closest Popeye's is not that far but is on the other side of one of the biggest traffic bottlenecks in Seattle right now. So, Sundays are really the best time to sneak over there and back. There is a Walgreens and a Dollar Store right there next to Popeye's and I'd love to stroll through both but I think I'll wait until after vaccine number two. Popeye's is a drive through.

It is a good maybe 15 miles round trip. That's a lot of gas to use. I filled the tank six weeks ago and at this rate, that tank's not going to last much past July. On the other hand, the battery appreciates all these little trips.

I have three more episodes of 19-2 and then I can finally get to all the other stuff I want to watch. Turns out that while I have the TV on a lot, I really only spend a couple of hours watching scripted stuff. I watch the news and jeopardy and a lot of whatever-with-sound-muted. I did find a cool BBC show (on our PBS) the other day called How To Make. This delightful engineer takes shit apart and makes bespoke versions - of wild stuff. Like sneakers (trainers, cause it's BBC). And a toothbrush.

Biggie is back to the fireplace again so in desperation to distract him, I pulled out the Bolt laser toy. He got so he just ignored it so I put it away. Today, I turned it on and he was only mildly interested and then went outside. I did not turn it off because I was busy typing and now he's back chasing that red dot like he's getting paid to do so. He's hiding from it now and then jumping out to surprise it. Yeah for battery operated cat toys. The glass fireplace screen savers!

Ok now the Bolt has stopped and Biggie is worn out and has gone to the bedroom to nap. Nothing broken. Whew.

Popeye's does not open for another hour and a half so I think I'll go get dressed and clean up the kitchen and prepare for my trip.

Oh here's a photo of Biggie planning what he's going to knock over next. 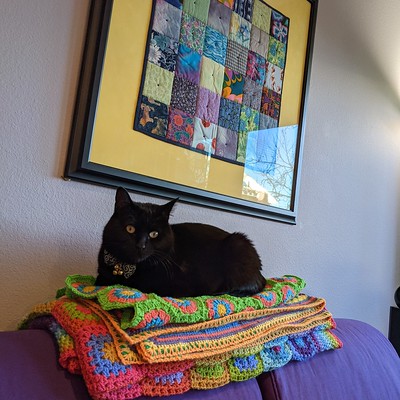 It's just ridiculous how much I love Popeye's Fried Chicken. I drove all the way there, waited in line (in the car) and when I placed my order they said it would be 20 minutes. I said No Problem. I waited 25 minutes. I got home and they fucked up my order. I ordered all dark meat and it was half white meat.

Now it is all put away and I am fat dumb and happy.

Time to watch CBS Sunday Morning and get a little crochet time in.
Collapse