This morning's breakfast was waffled fried egg on top waffled has browns. Delish. 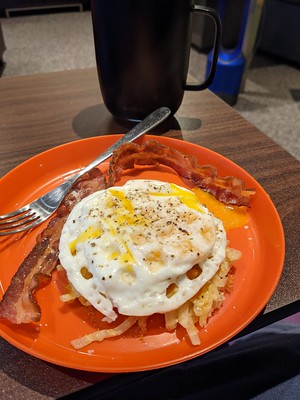 Still loving my mini waffle iron and now have ordered a mini grill to go with it. Waffled eggs are fine but a grill will be better - also pancakes.

My vaccine arm is sore but not nearly as sore as when it got the shingles vaccine. It's my left arm and I generally sleep on my left side. I slept on it last night with zero issues. Otherwise, no symptoms at all. I'm ready for my next shot.

It is really chilly here today 56f (13c) in this living room, 31 outside. It's supposed to be pretty darned chilly here all week. We even have snowflakes on the Tuesday forecast. I wish but I'm sure we won't see any actual snow here.

Biggie is still enamored with what is behind the fireplace screen. I don't want him back there but mostly, I don't want him knocking over the stained glass screen. He often moves on to other pursuits after a day or two and I'm hoping he does that this time. But, if not, I think I'll fill up some bags of kitty litter and use them to lock the screen in place. I can cover the bags in fabric so they won't look horrible.

Biggie has finally gotten back into our morning routine of nail clipping. He does not love it but he tolerates it for the treats. I used to put the treats on the ottoman. Then I started putting a couple on the ottoman and the rest in the ping pong ball puzzle box. This morning, after I clipped his nail, before I could even get the treat jar open, instead of hopping over to the ottoman, he went right to the puzzle box - ready to get to work! He's so funny.

The big plans today involve my going out! Across the street. To get catfish for lunch. It doesn't look like he'll get it onto his pre-order pick up menu which means I have to go order, pay and wait... in the cold... which is a PIA but I do love fried catfish so ok. Also he has coleslaw as a new side. I hope it's the good kind.

And that's it for the planned thrills and chills. But, no telling what will happen. I'll be right here and ready!

Years ago I managed a small department at IBM. I had two open slots and was interviewing to fill them when HR (then called Personnel) issued a hiring freeze. Then, a few days later, they lifted it. Then a few days later they reinstated it. I suggested red and green lights in the hallways would be more efficient that the memos they kept sending out.

That's how I feel about my relationship with Instagram. I never did completely quit but I did get my 'following' down to a very reasonable, doable, minimal few. For about 3 weeks. But, I miss it. I miss the suggestions and ideas so fuck it. I'm going back. Just until they add ads to the website version. 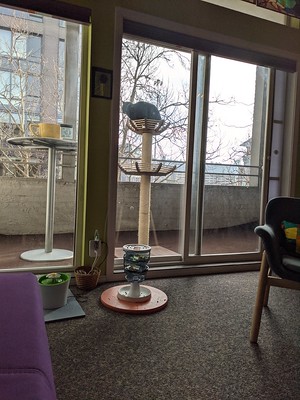 So apparently, the chicken guy on the corner also has a bbq pop up today and maybe not even the catfish. It's hard to tell from his website. I put on my coat and went over to get the catfish. I stepped out of my building to see a line that had slinked around the corner. A line of his customers. Yeah, nope. 1. I'm not standing in a line that long and 2. Too many people. I'm not doing people.

So I came home and made a delicious lunch for me.

I'm glad that he's go so much business. It says good things about his food and my neighborhood.

But, I think I'm going to maybe make a run to Popeye's tomorrow. My freezer and my tummy need some Popeye's fried chicken.

There's a great catfish place that I'll go back to once I'm fully vaccinated.
Collapse