On Twitter this morning, someone mentioned enjoying Amazon Prime's live coverage of the inauguration. I was flipping around PBS, ABC, CBS, NBC all on mute because I couldn't stand their pompous commentary. Turns out Amazon Prime covered it exactly correctly (i.e. the way susandennis wants it) - two Capital tour guides with plenty of coverage NO talking at all and some with just the band. It was delightful and I was glued.

That would be the big news of my day for sure except...

Last night just as I went to bed, I got an email from my doctor's office that I could log on Wednesday and get an appointment for a COVID vaccine! So this morning, first thing, I sure did. It was a little fiddly because the mychart (now myhealthchart) is fiddly on a good day was extra fiddly today. The first few times I picked didn't work. Finally, I got one to stick... Friday at 2:15! That's day after tomorrow!

I just now (3 hours later) went back and now see there are no appointments left. I feel guilty about it now. I think I may call and give the appointment back. I need to debate. [ EDIT: I won't. No more debate. I'll get the vaccine on Friday. ] Another waffle.

No word yet from Amazon about what time the waffle iron will be here...

There is a fascinating article in the AARP Magazine* that looks at the current generations of women. Women my age, and younger and all the changes that have happened - by looking at sets of grandmothers/mothers and daughters. It's interesting to me regardless but really so seen in this light and through these eyes.

*My brother describes all AARP publications and the stuff that used to be boring old people shit but now has some really interesting articles in it... Yup. 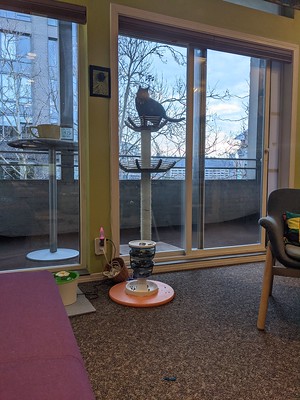 It came and it's exactly what I wanted. Exactly. It's tiny (a big plus for storage). And easy. Heats up in no time. 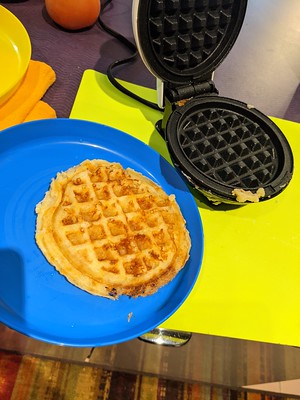 I put some biscuit mix in a bowl with some cheese and added a little water until it was batter-like and then poured. 3 minutes later this perfect little snack came out.

I need a little less water, I think. A little less batter over all. And maybe more cheese. Some spices wouldn't hurt either. But for a first run? 1 with a bullet.

Turns out the Amazon Prime coverage was from the actual government - the Joint Congressional Committee. They had several house of really excellently produced entertainment from around the country after the main event. It was delightful.

Biggie was overly interested in my yarn so I gave him his own ball and he went to town. I got it back and re-rolled it and then he lost it under the chair. I'll dig it out for him next time he messes with mine. 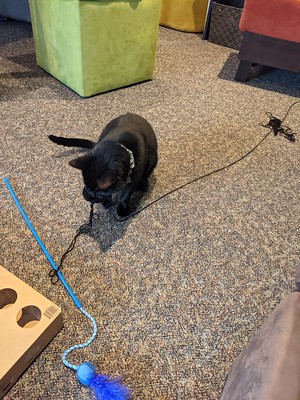 I just went over to the Social Security site to see what the deal was on income tax forms (turns out the deal is that they mail it to you by the end of January). But, while I was there poking around, I stumbled on the earnings page which showed me that I retired in 2012. I'd forgotten when it was. Next year I will have been retired for a decade. Wild. Just wild.
Collapse