Change is abundant now, in every walk of life. And if you don’t embrace it, you get stuck in the mud.

This is kind of always true but was said last week by the manager of the Oakland A's baseball team - Bob Melvin. (He is one of the many failed former managers of the Mariners. I liked him then. He was also once on House Hunters.)

Baseball is deciding what's the what right now. It looks like the stupid stuff - 7 inning double headers and starting extra innings with a guy on second - are staying around for this year. The smart stuff, like universal designated hitters, is still on the table. And the fans in the stands is going to be like the 2020 playoffs - small pods of people separated by space. And, not me.

Oh well. My next decision is cable TV. Will I shell out the extra $80 a month that it costs me to watch the games on TV? Actually, maybe, not. But, maybe.

I finally heard from my CPA today. He uses a 200 year old exe that requires a Windows PC. Thankfully, I still have one. The only other thing I need it for is PDF layers. Adobe only makes that function available on Windows and Macs and it's what I use to print out sewing patterns. Everything else in my world is happy on a chromebook. Including me.

So anyway. Taxes. Today's email only tells me that the CPA is alive and still working so I don't have to track down a new one. He's done my taxes now about 15 years. I do not want to have to break in a newbie. All of my investments are with Ameriprise which does not issue tax documents until Feb 15. So now it's a wait.

I am not an outside person. Fresh air and sunshine mean bugs and sweat to me and other unpleasant discomforts. If I never had to go outside again, I'd be fine with that.

My brother posted this morning that he was going to take the dogs for a walk and due to the shit in air and on the trees and grass in Texas, he was taking 10 tissues with him. Ha. I thought. I go through 10 tissues with my first cup of coffee in the morning.

My nose has always run. It runs when I eat (doesn't have to even be hot food). Some days it runs marathons and some days sprints. I've tried all of the drowsy and non drowsy allergy medicines. I'm not trying... again... Flonase. I don't think it's working, but my data is spotty and irregularly collected. I think, maybe, my brother is on to something... I should count tissues. I can do that.

Our COVID-19 numbers here suck again. Too many positives, too many hospitalizations, too many deaths, not enough vaccine. Every Friday now, they update the numbers and tweak the rules. The updates yesterday were not good so rules are still - no indoor dining and really restricted everything else.

Yesterday, when I went to pick up my food, I saw they had reset up one one of the dining tables in a corner and a little girl - probably 10 - was using it as a school room. Kind of a picture of the times.

Ok time now for me to get on with my day which promises to be like the others. Stress free and fine.

The last few times I've cut my hair, I've nailed it. So today when I decided to take a little off the back, I was just a little too cocky.

When I was little, I was forced to go to church every Sunday. Sunday school was tolerable but an hour of protestant church service was excruciating. My only savior was the hair. I would study the hair of the women (and some of the men but it was the 50's - not a lot happening in men's hair) in the pews in front of me. There was one woman who always sported the most fascinating up 'do'. But I studied all of them.

I will not be going to church for many moons in case there is a new version of me back there. She will be all WTF?? And I can't do that to a little mind.

I found a toboggan hat. And I'm making a better one now.

Like it matters which it does not. The hair on the back of my head grows fast and I'm not going anywhere.

Oh and 14 tissues so far - it's now 1 pm. Actually, that's fewer than I would have suspected. 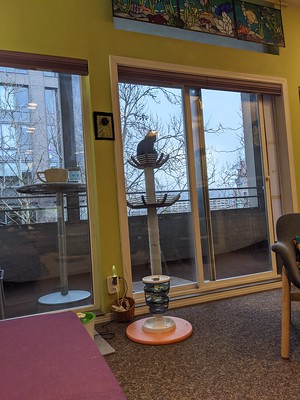