Another quiet Sunday of the pandemic. There are some days when I think about what my day would be like without it. Today would be just about the same I think. The stadium would be as quiet because the Seahawks are playing in California. I might take Biggie into the vet to get his incision checked out but probably not. I'd likely be doing exactly what I will be doing today - just hanging in the house.

Biggie has had just about enough of my obsessing over his incision. There is one spot that worries me and I keep taking pictures of it. So far, he tolerates as long as there's a treat involved but I'm thinking his tolerance may be wearing thin. And he does not see bothered by it one single bit. He's out there today on duty. The fix I made to the netting seems to have discouraged him from getting up on the ledge again. Whew.

It's as cold as it was yesterday but not nearly as windy. Gale forces were coming through that little cat door. At least this morning things have calmed down.

I plan to clean up the kitchen - really just wash the breakfast stuff - and get dressed. That's it, that's the day's outline. Still lovely having nothing I have to do.

I just saw in my friend's feed about 'attending' a zoom wedding and then saw about two different zoom weddings this weekend on Twitter. It reminded me of my nephew's wedding in Iowa which, thanks to my brother, I got to go to... via zoom... That was 4 or 5 years ago. So ahead of the curve.

I had a Trader Joe's quiche yesterday for lunch (out of the freezer). It was just barely ok. So last night, I pulled out one of those tart shells I froze the other day and made my own quiche and it was VERY excellent. And easy. I used canned mushroom pieces because that's what I had and they were kind of flavorless but otherwise.

This is Biggie's response to "wanna hop up here so I can check your incision?" 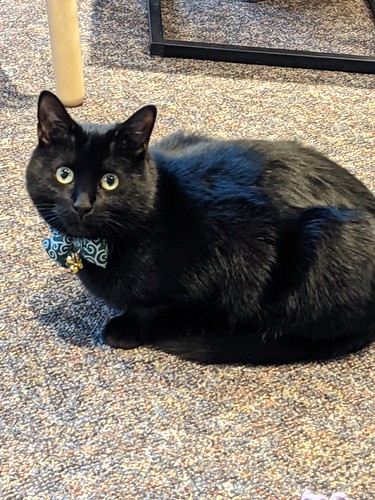 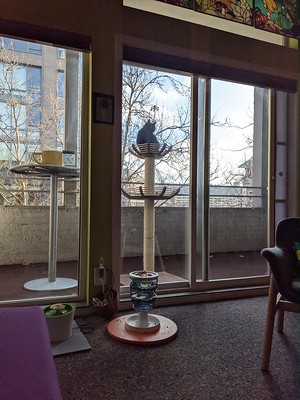