It's house cleaner day and today it needs it. I admit to being slack this week. 'oh, Amira will get that on Wednesday.'

I'm headed to the Mercedes place to get my key fobs looked and maybe see if they can fix the drawer in my dashboard. I'm guessing that will take all the time but, if not, I might pop into Goodwill or the Japanese grocery. I'm gonna play it by ear.

Last night I got a notice that someone in the Philippines was looking to access my Google account. Was that me? Nope. So I changed my password. It had been a year and once I had it changed, I remembered why. The more Google shit you have, the more tedious changing your password becomes. You have to log onto everything with your old password and then log off and log again with your new one but they don't tell you that so when your credentials are rejected, you don't know why.

I have one 'computer' - a $50 chromebit - that requires a bluetooth keyboard and I could not get the keyboard to connect and when I finally did, the credentials kept failing. Finally, I figured out it was the freakin' keyboard. Could Google give me a hint? Fuck no. GRRRRRRR

If Google gave me a teensy bit of an assist, I'd keep my password more current but I killed 2.5 hours last night, just changing my password. That ain't happening again any time soon. Maybe the folks in the Philippines is interested in doing it.

When I last made big changes in this living room, I was still working and needed computers. I had my personal one, my job one and another one that I used as a kind of server. I wanted three monitors so I had them mounted on the wall. Now I really need only one of those monitors - two at the most. So I've been conjuring on a change to that area of the room. I don't want to screw with some thing big but I think maybe I'll take down one of the monitors and replace it with a nice looking magnet board. Maybe.

I do believe our governor - the one we just re elected - will go to the other Washington to serve as something in Biden's government. And we'll get our newly elected not-even-very-interesting-but-not-toxic lieutenant governor as a leader. Yawn. I'm guessing that will just put yesterday's message on loop and mark the end of Doing Anything About The Problem on a state level around here.

Time to get dressed and get ready to split.

I got a new duvet cover a while back. I actually got two but returned one because I didn't love it enough. The one I kept is really nice but really heavy. It's a summer weight blanket on its own. Today, at Goodwill, I found two very nice duvet covers. One is exactly the one I returned. $35 on Amazon $5 at Goodwill! I bought it. And another one I really like. Neither are as heavy as the heavy one. This one is a little brighter than the picture shows. Also, it does not look like an unmade bed! 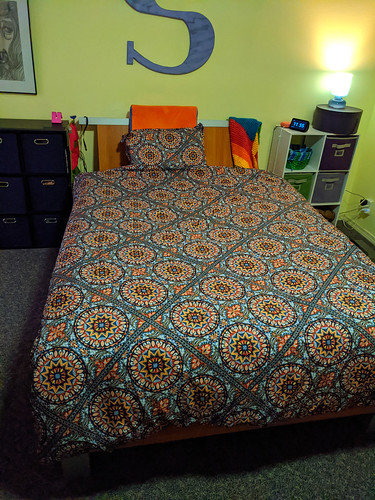 Before Goowill, I went to the Mercedes place and got my fobs fixed. They really aren't fixed. I mean they work, if you are standing next to the car, but they used to work if you were 30 feet away. But, baby steps. If they stop working now, I can go back and say, more than just batteries, dude. He charged me nothing and it took 10 mins so hard to complain. He also looked at the drawer issue and checked with his guy and said that 1. it would take about an hour and 2. neither of them thought there was anything back there that was going to cause a problem. So we voted to leave it until my next annual visit.

As I was driving away, I wondered if somehow my Costco Visa got back in there. I don't see how but maybe.

Then on to a funky specialty store that just moved into new digs. They used to carry tart shells that I used for quiches and periodically I check to see if they have them back. They do not BUT they did have info from their supplier of their smaller shells taped to the fridge. So I came home and looked them up and sent an email asking who carries their frozen tart shells in or near Seattle. Hopefully, I'll finally be able to get some.

After Goodwill then on to Uwajimaya and Daiso (they are next to each other) Daiso had NO Stickies! Their pet inventory was way down, probably to make room for Christmas shit. I'm sure they will be back in January and I have at least one in the secret stash. At Uwajimaya I got a poke bowl for lunch and some eggs and produce. I got tangerines but they didn't have any already peeled so I'll have to do that heavy lifting myself. Sigh.

Then home to a clean house. Oh, the house cleaner told me that the people across the hall - Chris and Tanya bought a house so that's where they moved to. Tough time to be selling or renting a condo in this neck of the woods. I hope they have better luck than the others in the building.

Now I've killed most of the afternoon doing this and that. And today is the first day I've had to use my Dyson cool/hot for hot. I lowered the insulating blinds and turned it on and already I've gained a couple of degrees. I need to get my hands working with the yarn to warm them up. And, now it's 3 pm. This day is pretty near done already.
Collapse