Last Sunday, I talked again about how much I enjoy reading the sunday paper in tree killer form. And then, last week, in reviewing my recurring monthly bills, I was reminded that I was paying $20 a month for that joy and I decided I was not getting nearly that much joy so I canceled. Today no paper and I'm perfectly fine with that.

I recently ordered two duvet covers. Turns out, in real life, I did not love the second one and it was sized a bit weird. My bed is a double but I like my blankets and comforters to be twin sized. The second duvet cover was more queen sized than twin and, while the fabric was fine, the print was not as wonderful as I originally thought. So it's actually going back to Amazon.

The new hot chocolate is still good but it needs to be creamier.

jaywil had the fabulous suggestion of adding artificial creamer. I had thought that it needed cream or milk, but that, too, seemed a waste of calories. But, creamer is certainly worth a try.

I am still rethinking my shower floor. It is not entirely smooth nor is it textured. It's kind of a hybrid that gives great hydroplane when wet. Not what you want in a shower floor. I tried a mat with suction cups and it was Ok. Not great. You have to still be very careful and stomp on the suction cups in hopes they will hold. Plus it only covers about a third of the shower.

Then I tried a solution that was those kind of mats that are made up of squares you hook together. It was an absolute fail. It was the size of the shower floor and still slid but more like a magic carpet.

The next try will be stickers. Non-Slip decals. These have a slew of great reviews that also include experiences of long term use and removals. So they are getting a try next. Amazon says they will deliver today. In general, Amazon is kind of not very Sunday delivery reliable. Sometimes the stuff gets here and sometimes 'uh oh, we've hit a snag in our delivery' and it comes on Monday.

The shower floor does not dry easily so I've got the curtain open and I'll stay stinky today in hopes of having it as dry when the decals get here. Since I'm in here by myself or downstairs to pick up the package but stay 6 feet from anyone else, I think my staying stinky won't hurt anyone.

Ohh Twitter just told me that that weasel Djokovic lost the French Open. I'm not unhappy about that.

The afghan edging is working out nicely. I made a little card to tell me which color was next. 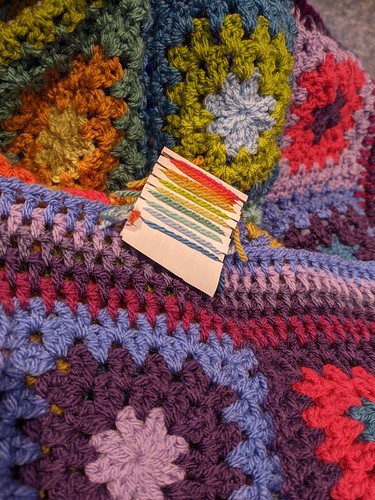 Meanwhile, Biggie's been in climb mode.

This is the wall between the living room and the kitchen. 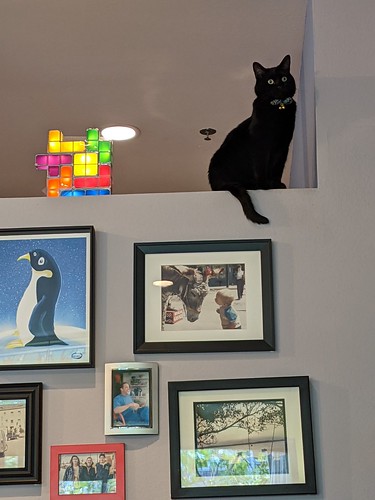 And this is the top of the cabinet next to the sofa. 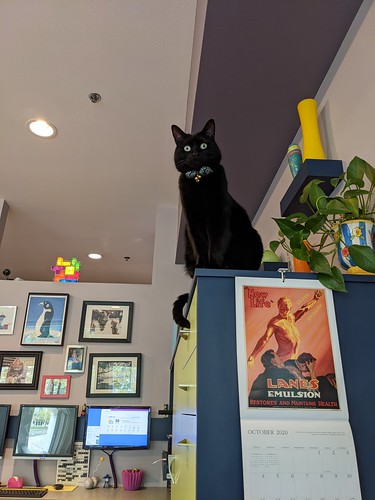 Then he went outside to his tree. I think he has a list of stuff he needs to check on regularly. And he is dedicated to his work.

There's a Seahawks home game tonight and thanks to the pandemic, I don't care. No rowdy fans, no noise, no nuthin. I'll hear the people at the sports bar on the corner, probably. They can stay open now til 11! And I'll hear the national anthem and all that is totally doable. City sounds.

Not only did my Amazon package arrive the lovely deliverer brought it up here to my door. I love that.

The sticky non-slip rounds, if they work as I expect, will be PERFECT! The box held 24 and I bought two boxes but I discovered once I was up from the floor, I had only put down 22. There are more spots I could do and might if they work out well. I was worried a little about how they would look (flashes of old bath tubs with grimy flower power stickers half coming up). But, I can't even see them! I had to feel to know where to put the next one. They went down fine and feel fine on my feet.

But, the final step in the instructions was "wait 24 hours before getting them wet". Poop. I will wait 20, ok? But no more.

I made a very sloppy breakfast for lunch. Burned the sausage, and then broke a yoke and then nearly burned the potatoes. It tasted ok but I wanted to get the mess all cleaned up so the smell would not linger.

When I got the packages, I discovered I got a newspaper anyway so I had to read that.

There was a lot of back and forth and up and down... at least a lot for me and when all was done and I went to put the rest of the eggs back into the fridge, they were missing!

The fridge isn't that full right now and they clearly weren't in there. I looked in the freezer, I looked in the trash. Those suckers had clearly grown legs and wandered off. I finally found them in the bedroom. No idea.

Oh and look who found Stickie!! 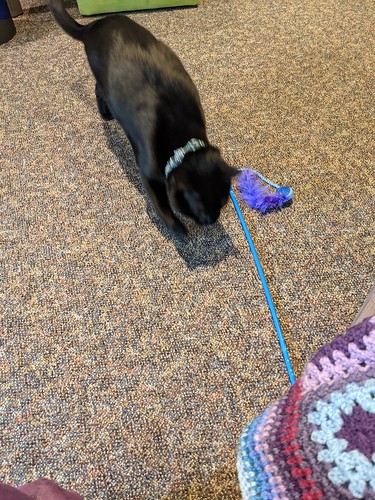 I'm taking the rest of the day off.
Collapse