This is one week when I am not unhappy to see the weekend coming up. I have felt fairly crummy all damn week and I am really delighted to have that behind me. I am not an unhealthy person and I really do forget how miserable even feeling a little off can be. Now I remember and ugh. Let's not do that again.

I finished all the squares in my afghan last night. 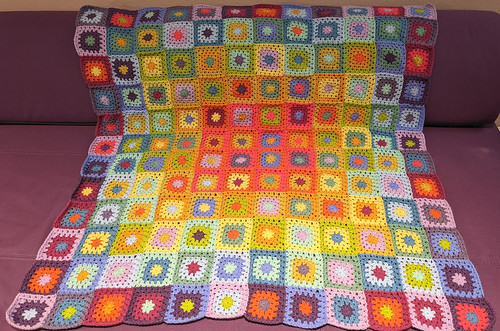 I did not pick these beautiful colors. I just followed the pattern created by a talented color artist in England.

Next comes the border. One row of each color in this order: 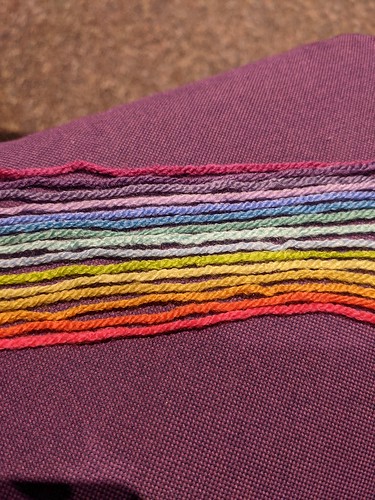 Looks like I have enough of each left to circle around the squares one time each. 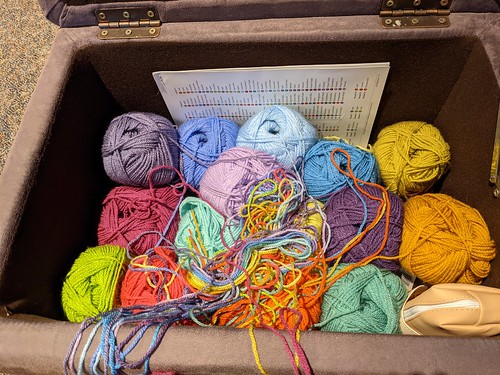 Instagram is helping me with my separation project. The latest update to the android app makes it far more complicated and confusing to post so I've contributed my last bit there. I'm actually done with the app itself which is liberating. I do my viewing of the feeds and stories from my laptop browser where, at least for now, there aren't any ads and it's easier to see an enjoy. When they fuck that up, it will be the end. Meanwhile the sub reddit aww is helping when I want to just scroll through cute stuff.

I think the couple across the hall from me are splitting up. They moved out a lot of stuff yesterday but not much furniture. Clothes and boxes mainly. And neither of them were doing the moving. They had kind of an ad hoc team of people, not professionals, led by an older woman - mother or grandmother, probably. I hope they are ok.

Every time I see someone moving in or out, I'm always so grateful it isn't me. There were years when I loved moving - leaving the old and venturing on to the new. Now I feel more like been there, done that, got the t-shirt, nothankyou.

And speaking of moving in and out of here, still no sales! This is wild. The home inventory in Seattle is experiencing record lows. But condos are just not moving. At all. It's the oddest thing. This is the longest stretch of no sales I've seen since 2000 when nothing sold for years. There are four for sale and five for rent and zero for takers. And it's been that way for months. So glad I'm not in that mix.

The sun is out now but the weather peops promise it's not for long. We have umbrellas as the graphic for the next six days. Everyone will bitch and I will wallow. I love feeling of being snug in my house when it's chilly and rainy out. It's especially fine with the memories of summer hot still working on me.

Plus, much nicer to crochet the edges of a heavy-ish afghan if it's chilly!

First of all, after my shower this morning I was able to stress out my haircutting adventures of yesterday and, turns out, it's fine!! I have very fine, sparse old lady hair that's never going to look amazing but at least it does not look totally whacky. so yeah.

Generally, I hate Fridays but this week not so much plus, then I remembered. Netflix drops the Bake Off episodes now on Fridays. Perfection. I watch each of the three segments separately. So I can manage to drag out the one episode all day. Very satisfying.

Today, in between, I made Amazon more money. Apparently, my buying spree has not ended. Small things but guess what adds up? I need to stop.

Canadian Thanksgiving always shocks me. Every year. First of all, Thanksgiving seems so very American to me. Plymouth rock, etc. Mythical I know but still. I wonder why they bother and particularly in October. That's weird and having it on Monday? That's not right. A few years ago, I popped up to Vancouver for our Thanksgiving and discovered that even though their Thanksgiving was six weeks early, they were all over Black Friday After Thanksgiving sales. So very confusing, all of it. But Canadians. Weird but endearing. Eh?

Every once in a while I am hit in the face with a reminder we live in different times. Food edition. In my last job, I happened to be in the office one day (most of us worked at home) when two of my colleagues were talking about the weekend. One, about 25ish, said he had been at his grandparent's and they had made him breakfast. They fried real bacon from pigs [as opposed to turkey or tofu bacon] and then, took the bacon out of the pan and cracked eggs right into the grease!!! His description and tone was exactly as if he had said: They cooked up some cow shit and put it on the plate for us to actually eat! He was so horrified that it was hilarious. But, most of the people in the room - way closer to his age than mine - were a combination of equally horrified and unbelieving.

(I don't often fry pig bacon because I buy it cooked. But, I also buy bacon grease to make up for the deficit. I kept my mouth shut that day and laughed inside long and hard.)

Today, the website Lifehacker, had another grandmother horror story. Someone's grandmother, as a treat, served saltines with mayo on them! Can you imagine????

Ha. I rarely have saltines in the house but if I did, I'd eat the lot of them spread with either mayo or butter. As a matter of fact, I think I'll add saltines to the shopping list. (I have plenty of mayo and butter on hand.)

Lesson here: You do not have to be a grandmother to know what tastes good.
Collapse