I slept in late this morning. Well, late for me which is fine. I do not need to be getting up at 5 for any reason. I've treadmilled and breakfasted and even read most of the morning paper in addition to the requisite daily internet catching up. It's still early morning enough.

The bird netting is 4 stops out from delivery. I've thought about this a lot. I've lived here for 30 years come January. I've had cats for all of those 30 years. Every single cat I've had has spent quality time out on that ledge. Without falling.

One November, years and years ago, I got a package in the mail from my Mom. She had not mentioned it. It was not my birthday or Christmas. I opened it up and it was a smoke detector. WTF? (This was back before they were ubiquitous. They were new and not everywhere. They were all over the news. With every fire, someone pointed out that a smoke detector could have saved lives.)

So I called to ask what the deal was. And she explained that she was doing early Christmas shopping. She had gotten all three of us smoke detectors as part of our Christmas but then got to thinking .. what if one of us had a fire between now and Christmas and could have been saved by a smoke detector but didn't have one???? She said she just could not get that out of her mind so she went ahead and sent them to us early.

That's kind of how I feel about blocking the terrace ledge. Now that I know a way to do it, if I don't and something happens, I'll feel way worse. Plus, Biggie's been through enough in his short life. I have to try.

So that's a today project. Also laundry. And the last baseball game.

He should get out there now while the gettin's still possible! 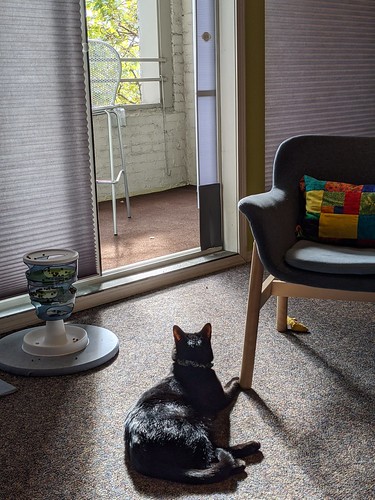 When I first got my current air conditioner, I realized it was way too heavy and tall to fit into the cupboard out on the terrace where I had kept its predecessor. But, I could just roll it into a little useless nook next to the fireplace. 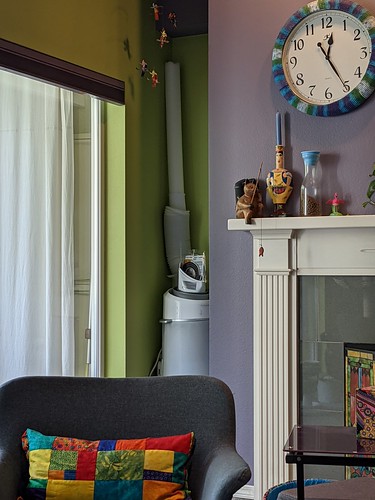 I looked at doors but all the non-custom offerings were really expensive and marginally useful and... ugly.

So I put up a tension rod and bought el cheapo curtains from Amazon until I could figure out a better way. 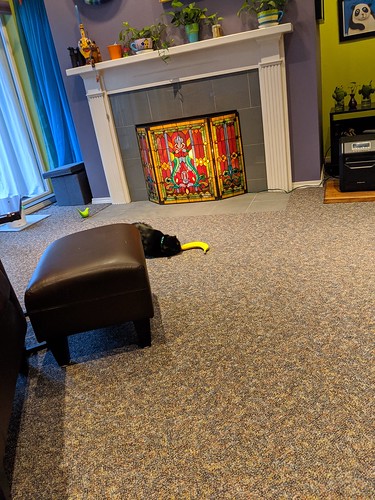 But I've never loved them. Plus Biggie and The Smalls clawed the bottom so they are full of snags at the bottom.

So today I went to my wall o' fabric stash and found the answer. 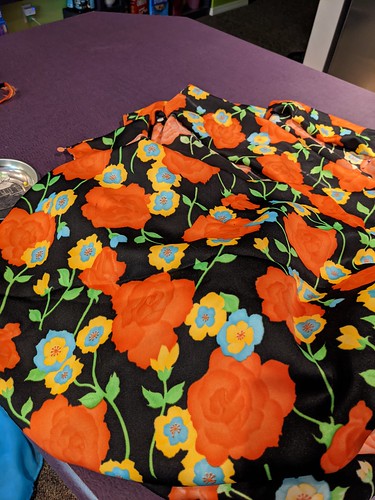 This fabric is some I found at Goodwill a while back. It's a polyester that has a great drape but really isn't that well suited to be made into the clothes I wear. But I loved it and it was like $5. And it's been sitting in my stash waiting for its turn. 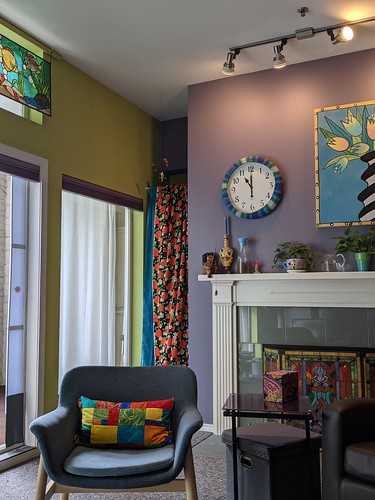 Now is it's turn. I need to hem it up - bottom, top and sides and then that corner will be a star!

Biggie watched very carefully while I stretched the netting out but he just watched. It was tightly rolled out and needs to relax. I have some hooks that I used to keep it from flying away. And then, I used the carpet to hold down the bottom (so he can't go under it). 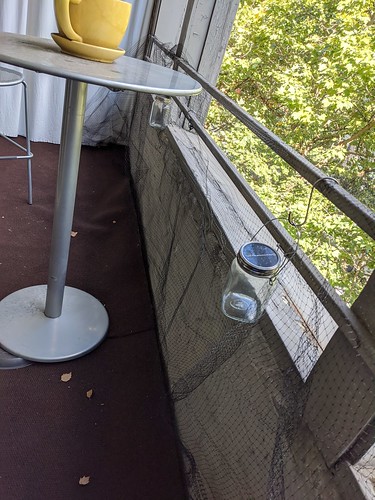 It does kind of disappear. It came with zip ties which I really don't like dealing with. Amazon had a roll of grey twist tie so I ordered that up. By the time the ties get here, it should be relaxed and I can fasten it down properly.

Once I was done, Biggie went out to investigate and he gave it a thorough checking out and, it appears, decided he was done with ledge jumping. He seems more resigned than mad. 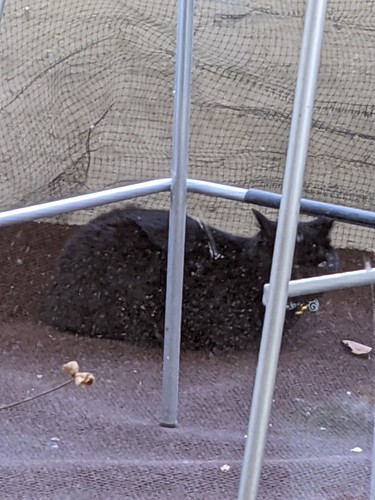 Of course, there's no telling what will happen when a bird comes by...
Collapse