Yesterday ended up kind of being a mess. I had something intestinal going on which is rare for me and not as much fun as you might think. I alternated between feeling just blah and feeling sick. Never horrible. Just constant. In a effort to try denial, I did take the scooter out to the new burger place. It ran well and made the trip very pleasant.

The doors were open and the two owners were both there and we all greeted each other lustily. It was fun. I waited while they made my burger. It's a small place that is very comfortable and nice.

The trip home was also nice - in the shade the scooter goes fast enough to get a nice breeze.

The burger turned out to be mostly a fail. Probably that was 10% opening day issues, 90% I didn't feel good issues. I ate half. And saved the fries. I'll have them today with something. The restaurant is open and airy and spacious enough that I would feel perfectly comfortable dining in - especially if I go for a late lunch. I will absolutely go back.

I spent the entire afternoon trying to teach myself two color brioche knitting. I'd show you the sample I knitted, ripped out, knitted, ripped out (x 50) but right now, it's at the ripped out again stage. I get better with each attempt and despite the frustration, I'm enjoying the process.

The Mariners had their home opening game last night. The broadcaster I hate was back in the TV booth but he wasn't too bad last night. Maybe he's changed his colors?? That would be lovely. And the Mariners won. It helped tremendously that the team they were playing - Oakland - really really sucked. I was still feeling like shit when I went to bed but managed to stay awake to the end. Good game.

I slept fine and long. And this morning I feel great. The sun is sleeping in, too so my walk was cool and lovely.

I stopped at the gym to try and capture it for old times' sake before the dismantling. When they first moved into the space (they had been in another part of the building), someone brought Tija a bobble head for her desk and then others added and a collection started and today there are probably close to a thousand different bobble heads and figures around the gym. It's a wonderful collection. I don't know what she's going to do with it. 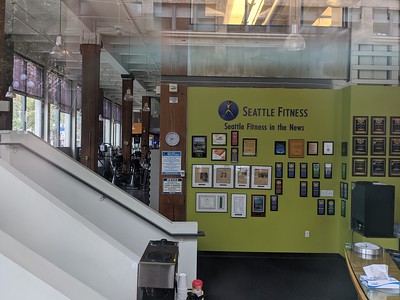 It did not dawn on me until I saw this picture that the color scheme of the gym matches my living room!!

I could only get photos of about 20% of the collection but it's enough for memories.
( Collapse )

Today I will conquer the fucking brioche knitting. I will. And I might do laundry. If it were regular times, I'd probably pop out to the regular grocery or to Trader Joe's for a few things but I won't and will be fine without. I've been keeping good lists of things I want if/when I do go out or have a delivery. I've got enough to get by now so I will.

There's a diner down the street. Planet Java. It's an ok diner. Actually it's better than just ok. Not up to excellent but good and handy. And they are closing. Not Covid closing, interestingly. They are in a block between here and the waterfront and all waterfront property is now gold since they tore down the viaduct.

So their landlord is kicking them out so he can gut the building and make something more profitable out of it. The owners don't seem torn up about it. They are selling their house and moving to Nevada.

The diner is full up to it's rafters with wonderful kitch. Everything from lunch boxes to kitkat clocks and coca cola signs. It's a treat for the eyes everywhere you look.

And tomorrow from 10-4, they are having a yard sale of all that kitch.

I am, however, going to Trader Joes. They have old people shopping at 8 even on Sundays so I'm going to join the elderly and get me some corn bread cookie mix and brioche biscuits and other delights.

It's been a good day here. I'm working on a new crochet and knitting project and that has kept me busy all day.

Time now for the news and then baseball!
Collapse