This morning, the sun was not out yet so I tweaked my walk a bit. (Being in direct sunlight hurts my eyes but, fortunately, the tall buildings around here give me enough flat, shaded walking areas that if I plan right, I can avoid it, but it does mean that when the sun is out, so are some areas of the neighborhood for me.)

I went up to 2 Doors Down to check on their progress. Their website and their Instagram say soon. But their soon and my soon are two entirely different soons. I was able to find a bit of a window to peek in and they still have all kinds of building equipment around and they are still painting stuff so their soon will not be today or probably tomorrow or maybe even this week. But, soon.

Then I walked past a big storefront that has been everything from an antiques shop to an AT&T branded Seahawks pre-game gathering point but has now morphed into a very classy looking place that is, of all the weird things, a Snooker Club!! It's really a lovely looking spot. Very inviting. I have never snookered but once, I won a trophy for The Worst Pool Player. So I'm sure I'd fit right in. Not. But, still, welcome to the 'hood! 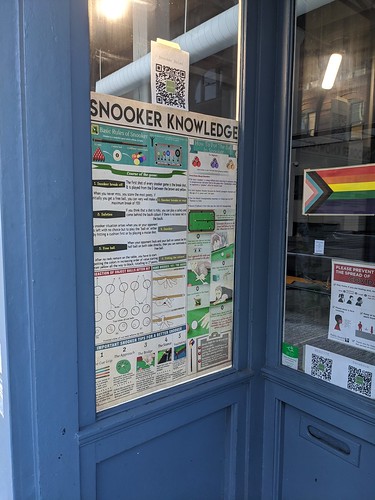 I made a delicious breakfast and share this pic for

letmesaythis 1 because she loves food pics and 2 because a hand mishap landed two small egg shell bits into the frying pan. I didn't want to reach into the hot fat to retrieve them so I just ate them. (She has a real thing about egg shells and now, whenever one goes astray, I think of her... bet ya didn't know that, did ya, Judy?!) 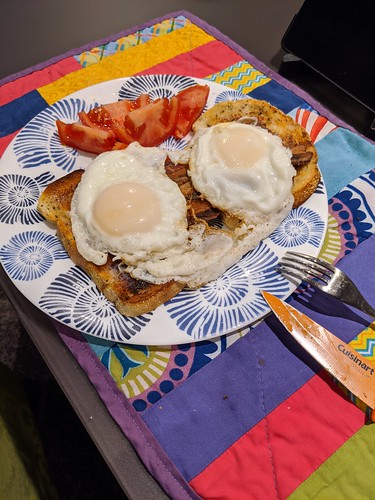 And I read the morning paper. Well at least half. I started getting the tree version of the Sunday paper about a month ago because a subscription to the online version was cheaper if you let them deliver an actual paper on Sundays(ad rates - makes sense). Initially, I figured I'd just bin it but, turns out, it's the best thing about the subscription! I enjoy the heck out of reading it. 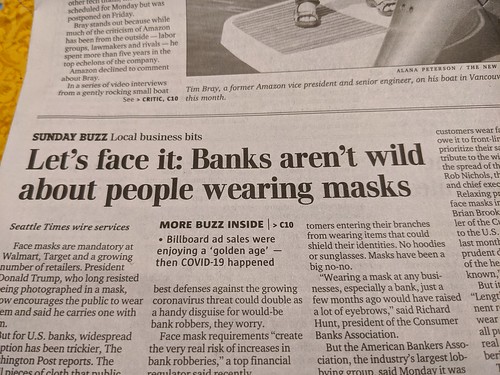 I have not been inside an actual bank building in forever but I do imagine the mask thing is quite the dilemma for them.

Reminds me of a friend of mine who's girlfriend inherited a pistol from her dead father. Now my friend and her girlfriend were not gun people - not even close. They picked it up with his other stuff and then fretted themselves to death about how to get rid of it. Finally they decided to just get it out of the house until they could figure out something. The only storage space they had outside of the house was their safety deposit box. Yep, they marched a gun into a bank in a plastic grocery bag.

And caused quite a stir.

Once safely outside the bank, still with their gun, a very kind security guy steered them to a very nearby gun shop who managed to solve their problem and they were gun free. But, it was a long while before they got up the nerve to enter that bank again. Now, if they go in with masks...

The other great bit from the morning paper was a column about Americans and Canada and now. It quotes a Canadian journalist as explaining You need to get the pandemic under control. You need a rational person to take the helm of your country. Until then, all we’re saying to Americans is: Stay away. When you come against our wishes, pardon the expression, it pisses us off. "Ouch." says the columnist "You know you’re becoming a pariah country when the Canadians go all “pardon the expression” on you."

And in other big news, we have a weather warning! 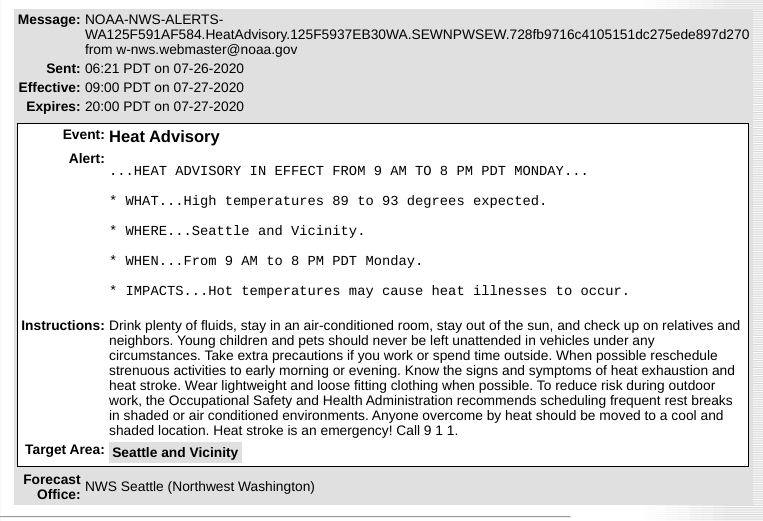 bill_schubert and others in Texas and Arizona and Nevada are snorting in laughter at what are normal midnight temperatures for them, we'll be suffering here! Even now in 2020, air conditioning in residences is not the norm. This is the time of year when people flock to malls and stores and theaters to suck up their air conditioning. But, wait... They also usually set up cooling stations in and around the cities and towns. But not this year. So it's not going to be a fun week. The forecast says it might get better by Friday or the weekend.

Now I need to clean up the kitchen, finish reading the paper, pack up an Amazon return and other misc stuff and then sit down to watch the ballgame.

I started it with my earlier entry and then there were comments and then I got to thinking about guns in our house growing up and then I remembered this wonderful family photo... 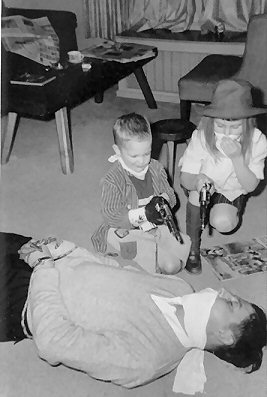 Sunday morning hold up! I can tell it's Sunday because of the paper and because Daddy was home. (At that time, he was a traveling salesman - fer real - and spent weekdays on the road.) That's my sister and my brother who have Daddy under wraps. It was in Kansas City, so before 1955 so

bill_schubert was probably 2 ish and Nancy 5 ish. Thank you Roy Rogers and Cisco Kid and The Lone Ranger.

I was 6 and way too grown up for such chicanery.
Collapse