Last night for dinner, with some pasta, I had my annual Pride bagel. (And no, not all my cuttlery matches my counter top - fluke.) 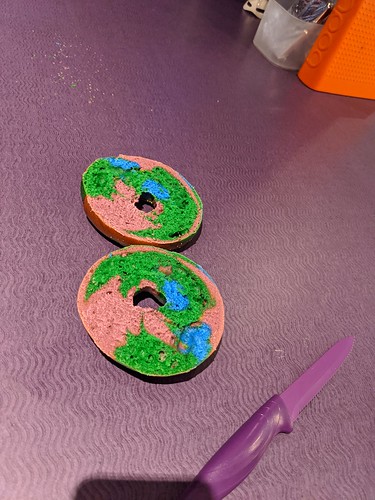 This morning it's nice and cool and cloudy. Probably the last of this for a while. It was dry for my walk but it looks like showers are just around the corner.

Meanwhile I broke my walking shoes yesterday. They were inexpensive Skeetcher ankle boots that I just flat wore out. I Zappo'd some new options but they won't be here til probably Tuesday. Today I tried some lined Crocs. They were not terrible but not good enough. I have another possible option in house which will get a try tomorrow. I also have a pair of regulation serious walking shoes but they require socks and that could be one level of bother too far. We'll see.

There was a shooting early this morning in the blocks that have been taken over by the protesters. One person dead and one person in ICU. Not much coverage yet. I wonder if they let police in after all. And I wonder if this is the beginning of the end of it. Not of the police protests but of the takeover.

My brother organized a family video call every other Friday evening. It's been mostly his sons and me and him with other guest appearances. And it's great. Earlier yesterday, he butt dialed us when he went to get a link to send us and his two sons and I ended up having a nice little catch up chat about this and that. So last night, on the regular call, it was just me and him and our beers and it was great.

Just to chat about this and that and whatever. Just the two of us. A lovely comfortable catch up.

I think my latest knitting project took a turn. These squares were originally intended for a blanket that also involved a lot of other squares and rectangles with different patterns. But I seriously love the fabric of these squares and now I think they are going to be a cardigan. 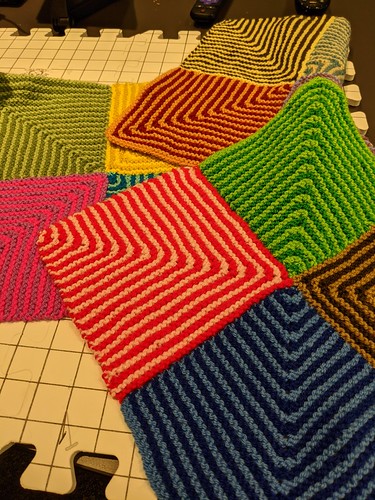 I have a couple of little sewing projects to do today but that's about it for agenda items. Otherwise, knitting, etc. 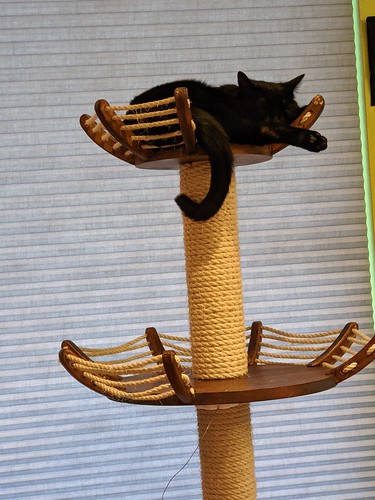 I've been fully retired for 7 years and I worked from home for a decade before that so I've had time on my hands before. But these are New Level days.

So today I made a couple of face masks. Which is hilarious because I have several and a few on order and don't ever go anywhere anyway. I keep one in my pocket for my walks but only take it out if/when I encounter another person which isn't often.

Then, I did that one job that I was sure I was going to die having never gotten to... For about 10 years now, whenever I saw a book that looked interesting, I put it on my Audible wish list. The list grew to more than 300 books. I already read some. I lost interest in others. I have no idea how or why some ever even got on the list.

Plus, I am seriously considering closing out my Audible account.

So, today, I went through every single one of the 300 some odd books and looked at the synopsis and decided... want/don't want. If want, does the library have it? If yes, off the list. If no, leave on the list.

It took forever but now there are 28 books left on the list. Audio books that the library does not have that sound like I may want to read them. A much easier list to deal with when deciding to shut down the account or not.

And the rest of the Might Wanna Reads are now safely on my library list. The library's catalog of audiobooks has gotten so rich.

I am now officially at the end of my ToDo list!

ljtourist called this afternoon to say hi and catch up but then said he was planning to go to Trader Joe's and would love to get what ever I wanted and drop it off!!! How cool is that?! Plus...

Before he called, I was trying to figure out a database problem. When we hung up, the light bulb went off and it worked!

It was fairly easy to scrape it all into a spreadsheet but then I learned that The LibraryThing needed ISBN numbers for bulk import. Ugh. I was not wild about manually adding 100 books.

I poked and Googled and tested and swore and tried a few things and then, after the phone all break, I figured out a way to trick it. And, it worked!! They all slid in and now I have a collection called Want to Read and they are all tagged 'library' or 'audible'.