Biggie's asleep next to me. I'm all caught up on the internets. I need to get dressed and make the bed but for now I'm just enjoying the cool and quiet.

I've had issues with my Eero routers. They did a firmware upgrade recently and, coincidentally, I started having issues. Their support people can't nail the problem. I bought Eeros way back when they were outrageously expensive and new to the world. They were a hungry startup and used to send me swag. A coffee mug, a blanket and other stuff. Their customer service, which I rarely ever even needed, was outstanding. Then they were bought by Amazon and now here we are. The ball is now back in their court and I do not expect to hear from them. Tomorrow a Nest Wifi system will be delivered. We'll see..

It's because of the Eero issue, I'm convinced, that I've spent so much of the past few days on hold with various other customer services. But I'm pretty sure today will be hold free.

While on hold yesterday, I did a deep clean of my Google drive. I could buy more storage but I discovered that deleting shit and compressing other shit bought me 30% of what I already owned. I could also move it all to an external drive and off the cloud altogether but I like having so much of it handy.

My biggest library at this point is my Patterns. Sewing/Knitting/Crochet. It's so luxurious just to call up whatever I need from where ever I am.

And speaking of sewing.

mikiedoggie had the most inspirational entry this morning. I love every single one of his fabrics. And want to sew with them all.

But today is a knitting day. I am about a half hour away from finishing one long term project and I have another I'm itching to start just after.

I've been watching Asian Americans on PBS and finding it fascinating. A whole lotta stuff I never knew before.

And speaking of Asian... tonight I'm going to have dinner delivered. But, I can't decide between fried chicken (Ezell's) and Asian (Buddahbruddah). Of course, it's only 9:15 am so I have some time but also I have nothing for lunch. I could get crazy and order lunch and dinner delivered but, nah. That's over the top for someone who has a freezer full of food.

Now I'm going to make the bed, get dressed and do some back stretches to start the day.

We got notice this morning that our water was going to be shut off from 11 until about 4 today. It's now just after 1 and at least twice, maybe more times, I've thought, hmmm maybe I'll go wash those dishes in the sink and, hmmmm maybe I'll toss in a load of laundry. Now, neither one of those things is even close to being critical. There is a little bit of a mess in the kitchen from quiche muffin making but it's not like that won't keep.

But I did measure and I know they are going to be as delicious as the last batch.

1 cup eggbeater (which, according to the carton is 4 large eggs)
1/4 cup heavy cream
1/4 cup all purpose flour
2 cups grated cheese

I fill my large muffin cups to halfway. 350 degrees for 30 minutes. They will puff up high and then fall back down as they cool and get about puck sized in the fridge.

Of course, you can add another egg and leave off the cream or use milk instead.

I meant to snap a shot just after the end of their baking but the bell went off when I was in the middle of a severe phone game with heavy penalty for stopping. So this was maybe 5 minutes later and they had already fallen from their over the rim peak. 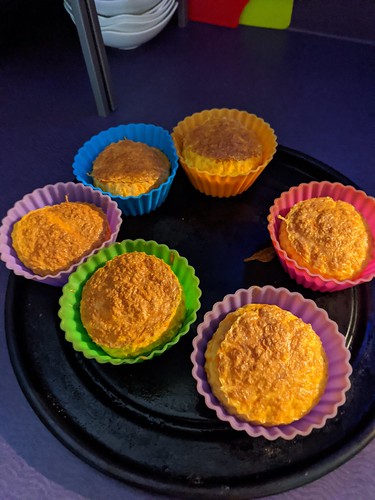 I ended up ordering lunch from my bagel place and going to pick it up. I thought about it long and hard as they no longer have curbside delivery. But, it was fine. They had the wide doors open to the parking lot and a long table set up. I didn't even have to step inside. I just told them my name and they handed me the bag and we were done. It felt very safe and it tasted very delicious.

I ordered Asian for dinner.

I vacuumed half the house. Well, I hit the button on the robovac. I'm going to do the other half as soon as it gets through charging. Biggie's quite busy making sure everything is fine. It is. He's currently got the indoor/outdoor carpet out out on the terrace all bunched up. That's his new favorite thing to do. He flips it up and crawls under it and then bunches it and sits on top. I could go straighten it out 20 times a day and he'd be happy as a clam to muck it up again. 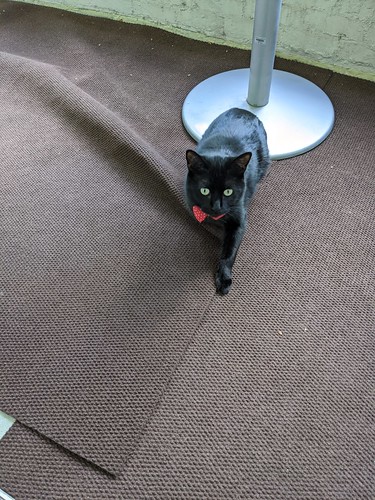