Today is housecleaner Wednesday. Except no. She is still coming to clean the unit across the hall every two weeks but I'm just not ready. And house cleaners are specifically called out on the governor's schedule as phase 3. We are currently in Phase 1*

She is, contrary to the beginning, now very responsive to texts so that helps with the planning. Since she's here, I just tape her pay in an envelope to my front door and she picks it up when she comes to clean the neighbors. I'm actually pretty sanguine about the whole thing. It's nice not to have to stress about where to go while she's here. And I've been doing a pretty good job of keeping the place up. It could use a good dusting but I sure as hell am not going to do that what with my lungs' love of dust. I have gotten pretty good at toilet cleaning and turning on the vacuum robot.

And, I really don't mind paying her. She's cleaned my house now for more than 10 years. I feel like it's a contribution to Covid-19 relief.

And it makes me feel safer to do it all this way.

*Interestingly New Zealand went exactly the opposite direction. We have 4 Phases with 4 being pretty much All Back To 'normal'. New Zealand has 4 Alert Levels with 1 being their pretty much all back to normal. I'm pretty sure we went with phases because alerts are too scary for us. Precious flowers that we are. But I do wonder about how the tilt was decided 4 the worst? 4 the best?

I fell asleep quickly last night and slept through until 5 this morning before I had to get up and pee. I usually get up several times, but not last night. So I figured my Fitbit sleep score would be way higher. Wrong. Fitbit thinks I slept like I always do. Pish Tosh. What does it know anyway?

There were workers today at T-Mobile Park!! Last season, they announced upgrades to the park. One of them was to open up the north entrance and make it less of a bottleneck. That's the entrance I pass by each morning. In January they put up a fence around it and were working on it but by March the work had stopped. Today, it appears, it may be starting again! Kewel. Nice to see some signs of life there. They are going to start using the parking lot (on the far side from the north entrance) for Covid-19 testing. But, I think what I saw this morning was park upgrade work.

I'm reading (listening to) The Crow Trap by Ann Cleeves. My brother (

bill_schubert) found her first. I never even thought to look for who wrote the books behind the TV show Vera. We both belong to the Vera fan club so finding her books should have been obvious to me but it was not. Anyway, the book, the first in the series, has the same slow, deliberate pace of the shows, but, I'm now a third into it and so far, no sign of Vera at all! I thought it was too slow for me at first and I put it down and picked up another, completely different novel, and listened to it for a couple of hours. All the while, I'm wondering what was happening with the characters in Crow Trap. So I came back and it's just so lovely to read. I have no idea where it's going and I don't care. I'm just enjoying the ride.

I have plenty of dinner food in the house but I'm running low on stuff for lunch. I have a hole in between snacks and dinner. Maybe I should just eat up my snacks at lunch time. I do have Costco cheeseburgers in the freezer, I should pull one of those out to thaw.

I did. I took the car - which still runs, yeah - and went to the Amazon dropoff location. I needed to return the monitor I did not keep and my usual option of leave it for UPS pick up would have cost me $8. Dropping it at Amazon cost me $0. Easy choice.

It was fun, and different to be outside in daylight when other people are out. Most everyone I saw was masked. One guy on a bicycle was not and I saw one other person walking alone who was not.

Twitter says that traffic in Seattle is picking up, but not around here. Had I made that trip in January, by the time I waded through traffic at that hour, it would have taken me twice as long. My trip took me by the baseball stadium and they were, indeed, working on that north entrance. So encouraging to see that.

My new monitor is cool. It attaches to my laptop via magnets so very easy to pop on and off if I want. For some reason it seems odd to look to my left but I don't want it sticking out the right and taking up precious desktop space. I wish I could find a table like this one with a bigger top but so far, no joy. 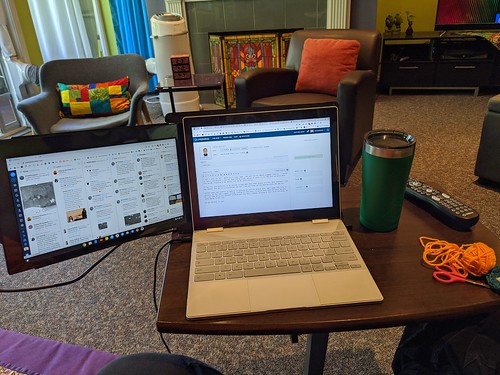 If I had a bigger table top, I could pop the screen off and prop it next to the laptop and use it vertically which would be fun. Maybe some day.

Years ago I started using Pepsodent toothpaste. Plain old white Pepsodent in a giant tube that I got at the dollar store... for a dollar. When the pandemic hit, I only had one tube in my stash. I'm now getting to the end of that tube. But, I found some on Amazon. $12 for 6 tubes. No problem. Yep I could get it cheaper at the dollar store but, I'm totally willing to pay the freight this time. Hopefully, by the time I get to the end of tube 6, I'll be able to go to the dollar store myself and stock up.
Collapse