I'm sorry people who hate snow or are tired of snow have snow. I would love some. But instead, I have a threat of hitting 90 degrees today. I'm wondering if today is a day I should set up the air conditioner. It's comfortable in here now with the shades drawn and the fan on. I thought, when I first went to bed last night, it was going to be too hot but it turned out not to be so maybe tonight will be the same.

BUT, checking my trusty air conditioning spread sheet, it looks like there have been several the past decade when I've set it up in early-ish May so probably that will happen.

My love/hate relationship with TiVo continues and today hit, once again, the love mark. They revamped the UI last year and then a few months ago added in required ads. You click play and now, instead of the show, you get a very annoying delay and then a random advertisement for whatever and then the show. The old UI did not have that so I rolled back. But, this morning I happened on a couple of forum posts about people, with long standing accounts, calling TiVo and requesting those ads be removed... successfully. My account is now 10 years old.

So, WTF. I called and nicely asked that they remove what they call the pre-roll ads. A nice lady asked me for the serial number of the box I wanted them removed from and then said that she'd have them gone in 72 hours. I'm not going to quite believe it until I see it but Hallelujah! Pending.

Not that there is anything to record these days... But, still. I'm hopeful there will be someday. I watched the last episode of Tommy last night. That was a great show with a great future. Killed before it even reached its prime.

My nephew turned me onto a BBC series that is now on Britbox and I think a season or two is on Hulu - called Inside No. 9. The first episode was weird, a little funny, and dark. The second was just flat out hilarious... and dark. But, mostly hilarious. And there are lots of episodes left. So yeah!

Biggie is outside looking for flies or crows or leaves that blow. Who knows. He's such a busy cat - so many things to do, check on, take care of. I feel like one day I'm going to look and he will have pulled out a little notebook and pencil to check stuff off his list. But, maybe he's not that organized.

Oh, just remembered I have not cleaned out his litter box yet today. Better get on that. And. The air conditioner.

I'm ready. This is the third year for this air conditioner and set up was fairly easy. It lives behind a curtain in a little alcove next to the fireplace. It is huge but it is also on wheels so old lady doable. 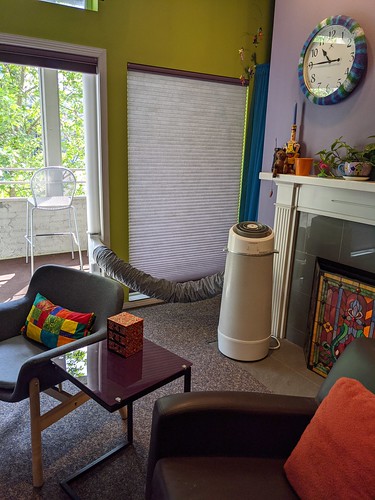 I turned the hose vent upside down this year to keep the floor clear for both Biggie and Eufy. Also that hose gets warm so maybe help keep it from getting too warm.

Above it is... stryofoam. When I first stuck it there, Biggie tried to get at it. It's a little high for him to get a good grip. My plan was to cover at least the bottom 10-12 inches but maybe I won't need to. He's left it alone.

I really wish I could noodle out some way/box/doorway/hole so that when the door is closed, he can still get out to the terrace. It would not have to be big and I could set the whole vent mechanism on top of it but I can't figure out how to fashion it. I'll keep thinking. 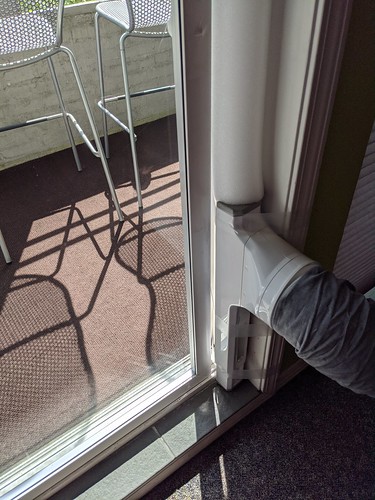 There was pure joy, however, when I fired up the app on my phone and clicked it to cool life. Ahhhhhh. If I do not use it for a month or more, I'll be very happy. It's just lovely to know it's there and it's ready.

Here's my setup/takedown dates with today in the mix.

I had an LJ 'friend' of long standing leave an insulting comment to one of my entries today. I should have deleted it but, instead, snarked right back and that drew an even more insulting reply - anonymous, of course.

I'm spending no more time or energy on this. I deleted the thread.

This is my journal. It's my record of my life as I see it. I'm happy to have you read it if you want. And I love comments. Respectful comments. If you want to leave respectful constructive criticism, that's fine. I love respectful suggestions.

But, insults and, really any comments I don't like will just be deleted.
Collapse