The weather forecasters are terrorizing me. They are threatening 80's by the weekend. I am not a fan of hot weather. Like those who scream when snow flies in April or October, I get my panties in a pretzel when it's too warm too late or too early. And 80's in May is too early.

So, I'm going to specifically enjoy cool this week, while it lasts.

Biggie is out on the terrace and a flock of crows just zoomed by. He lost his shit. And now he's racing in here to tell me about it. He's cracking me up.

Today I have some sewing to do. And that's about it. Goodwill is back open for donations so I might do a little cleaning out of spots here and there. The shelves could use a dusting but if I keep the light off in the hallway, I won't notice. That might be a better course of action than actually dusting. I need to leave something for the house cleaner when she comes back in - whenever.

My boyfriend was back this morning and I got my smile and a wave. And there is a little progress on the lastest. 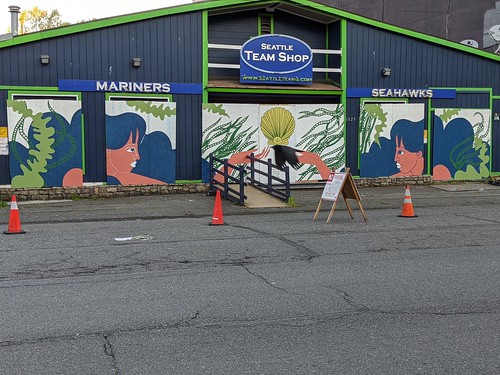 There are a few shops who have not boarded up and someone stuck flyers on them offering to do the service. 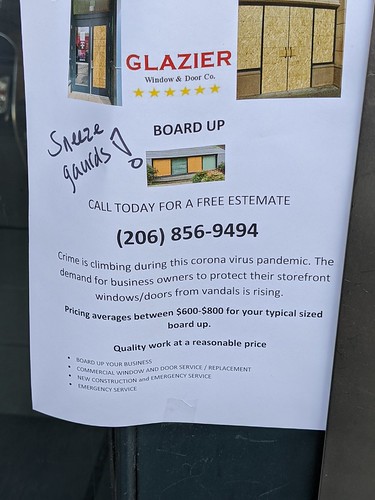 If they do board up, then maybe more artwork?

Fifty years ago, the world was in turmoil - at least my world. The federal government was sending all the boys in the United States over to Vietnam to get killed in a war we had no business even being in. I was 21 and my friends were getting killed by my government and I was being spared because I was born without a penis.

I was in college and we spent that fall, winter and spring in peace marches and vigils - we were sad and scared and furious.

And then, at a college about the same size as mine about an hour away, on this day, 50 years ago, soldiers in the federal army - the National Guard - shot and killed kids just like me who were protesting - just like I was doing that day.

It was horrible and terrifying and unbelievable. That college - Kent State - emptied out and many of those students came to my school to stay with us. They brought more terror and fear. It was a horrible horrible spring.

I'm also remembering another life event - this one in 1981 which was joyful except I was horrible. I was married (another chapter in which I play the villain) and my husband was a newspaper reporter. He was on a small team of reporters who, that year, won an actual Pulitzer Prize. This year's Pulizers were handed out today, which is what brings this to mind, but in years past they were mostly awarded in early April.

My husband's group knew they were nominated and that they would find out on this particular evening. So there was a giant party planned for the announcement - if they lost, it would be a 'an honor to be nominated party' and if they won... I should have been there by his side.

Instead, it was opening night of the baseball season and I had season tickets and I was in my seat at the ballpark when he got the word he had won. I did have a beer in celebration.

I sucked so much at being married.

I've written about both these things at least once each and probably more but I'm thinking about them each a lot today.
Collapse