Says The Smalls about the vet. From 1:30 to 3 he tried his best to get me to wake up. Then from 4 to 6 he and Biggie staged NASCAR races across the bed and then wrestling matches on top of me. It is 7 am and he's already eaten an entire can of cat food.

We have canceled plans for today's trip to the vet. I'd be laughed out of the office if I took him in now. He's clearly fine.

I'm wondering if he didn't pop open this computer and read the comments from my pitiful post last night. So kind. Thank you. (And, I love

I spent a lot of yesterday thinking about how I could describe to the vet that I knew The Smalls was poorly. Today I know the answers. Yesterday, he climbed into my arms and just lay there like a lump. Today he climbed into my arms and lay there but also played with the zipper pull on my robe and followed the noise of the birds outside and of Biggie inside. Small things for The Smalls.

Also the eating. One thing with The Smalls is his love of eating. When he's annoying the shit out of me, it's often his way of saying FEED ME!!!! Since Biggie feeds himself from the kibble tree, he never does this. But The Smalls needs me to open the cans. 80% of the time when he hears me in the kitchen, he comes running with the FEED ME!!! light on. Last night, even at dinner time, he wasn't interested. Today's he's interested, a lot.

And, of course, the night time shenanigans.

I know he's not as robust as Biggie and never will be but I just hope we get way more days like this instead of days like yesterday.

Also yesterday, it rained in Arizona. Lots. Really. And that rained killed my opening baseball game. Today, chances of playing look way better and it's on TV. So yeah.

In a Seattle subredit, this guy asked for help with the Seattle Library. He wanted the front page of the Seattle Times on the day his Mom was born here in 1960. You need a library card since he's not from here, he couldn't get one. So I offered. He sent the details and link just now. His Mom was born in 1960 so the result was great fun. It was a Sunday. That front page had more news on it than the entire paper today, I suspect. Those people knew what news was. Also it was a bitch to read because so many words! ha. I also captured a couple of the other pages with ads and prices and other news.

While I was there, I looked at March 28, 1949 - my own birthday. Turns out on the day I was born, liquor by the drink became legal in Seattle. I was in Brooklyn, NY at the time so I did not know. Also I was literally minutes old.

I got some new undershorts not long ago that I love. They are soft and don't rub or scratch anywhere and weren't expensive. So I went back to that same company and ordered t-shirts (ones to wear under other shirts for warmth). They came today. I ordered a size larger than the undershorts size and they were two sizes too small. Back to Amazon. Sigh.

My printer ran out of black toner. I ordered some a while back. It's enormously expensive. This is a color laser printer. The original black toner lasted 5 months. The other 3 colors are at 40%. Changing the toner on my old printer was always a dicey deal and a couple of times failed. This turned out to be much easier and worked the first time. Whew.

The Mariners racked up their first loss of the season. The first of many, I'm sure. But it was so nice to have them back. I can get so much done with a baseball game in the background. I've never been one to have music on while I did stuff but gimme a baseball game and I'm Ms. Multi-task.

All seems ok in cat-ville. The toner cartridges were packed in the box with styrofoam endcaps. Guess who was all over that action like white on rice. The others are now stored in a box which is in a bag.

Time for the traditional Breakfast For Supper.

This looks like Biggie being a bully but, honestly, The Smalls asked for it and it was over as soon as the photo was snapped. 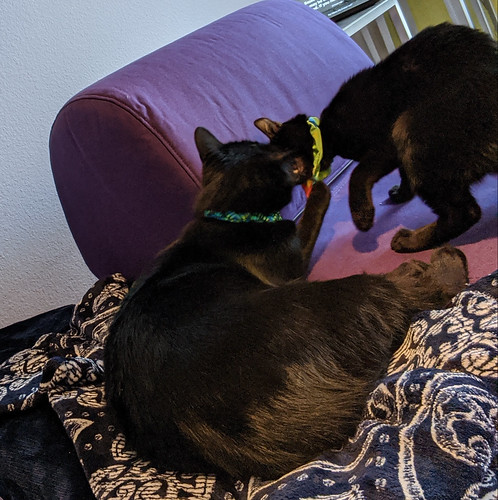 Edit later: I was in the kitchen making Breakfast for Dinner when I saw Biggie coming in from the bedroom with one of those styrofoam end caps in his mouth!! Seriously. That cat is trying to kill himself and me. All the end caps are now in covered trash cans. He cannot get into them.
Collapse