The cats left me alone last night until about 3:30. They tried to convince me it was time to wake up but they didn't try hard. When the alarm went off and I opened my eyes, they were playing quietly next to the bed with some toy from the living room.

Now, Biggie is taking toys out of the bin, one by one, chasing them around until he loses them and then getting another one. The Smalls is eating his second breakfast.

I need to put away clean dishes, scoop out the litter boxes and get dressed. When the house cleaner gets here or before if she's running late, I will set out. I have a few things for Goodwill and I'll pop in to see if they have any good things for me... And then Costco. Inhaler, Kleenex and gas. Then a stop by the post office to mail my tax stuff off to the CPA. Big doin's!

I'll get up on a ladder if I really really need/want to but, honestly, I should not and, if it's something I don't care about, I will definitely throw it on the pile of I'm too old to do that any more.

I have one web cam up high on top of some kitchen cabinets. It's plugged into an electrical outlet up there. The only way to 'reboot' it is to climb up there and physically unplug and replug. There is not way in hell that that is a safe thing for me to do. There was a time when it was nothing. Easy peasy. Now it is perilous. But, last night I did it - hopefully, one last time, and installed a smart plug so I can now reboot from my phone.

But, I could just as easily have been on the kitchen floor in agony with a broken whatever or two.

Now I'm going to keep a list. Stuff that I need to get someone in here to do for me. Then, when the list gets healthy, I'll hire a Task Rabbit or the like to come in and polish off the list.

Getting dressed and cleaning out litterboxes is still in my safety realm so I'd better get on those now. 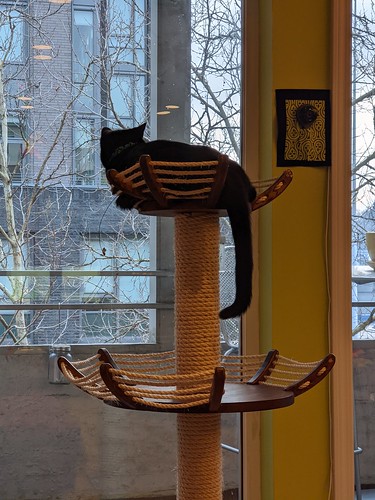