So,what did you do last night?

We did everything we could to ensure she didn't sleep. We were not 100% successful but I think we made our point. It was exhausting. We are proud. 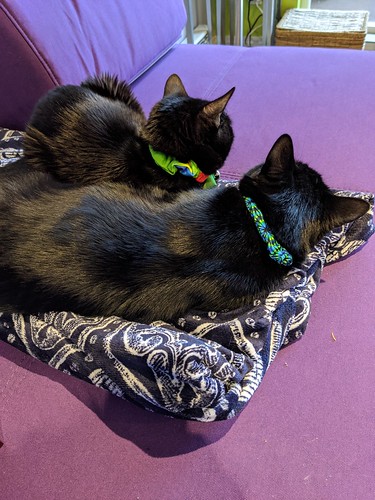 They really only had enough energy to go until about 3 am and then they gave up and I got some solid sleep. I had decided last night that I'd skip swimming today. The sun is supposed to be out and remembering last Sunday. Not worth the effort. If I only ever swim 5 days a week, I'm ok with that.

Right now, right here, it's solid thick fog. I cannot see the football stadium across the street. The gym is 10 minutes away and up high enough so that my ears pop every morning on the way home so there is no telling what the weather is like there. Could be fog. Could be sun.

I just had a lovely breakfast of fried eggs and one of the biscuits from Friday night's dinner delivery. Last night I reheated one of the boneless chicken pieces and had it with cheesy pasta. I reheated it gently and got all of the crisp. Delicious and easy.

Yesterday afternoon, I took a walk over to Uwajimaya for tangerines. On the way I discovered that there is a new bakery going into the old Tulley's between here and there. They look pretty near ready to open. It's a Tous le Jours bakery. That's going to be a fun stop and yet another incentive to walk. ha!

CBS has a new show out - Tommy with Edie Falco. I'm not a huge fan of hers but I watched the pilot and I am now a huge fan of the show. It's smart and clever. I saved the pilot to probably watch again just before I watch episode 2. Some of the dialogue is Aaron Serkin-ish and too snappy to catch completely the first time and too fun to miss.

I am over the Oscars. For the past few of years I have recorded it in case something happens that I want to see. I think that's happened once. I'll do that again but likely not watch it.

The big action item for today is cat food. I have about a half dozen cans of pate they they will just not eat so I'm going to go trade them in for stuff they will eat.i

There's a good grocery store across the street from the pet food store but, I don't really need anything. I have two dinners of mongolian beef and two dinners of chicken and the Door Dash app. Plus, I want to 'eat down' the stuff I have on hand.

Otherwise today will be knitting and TV I think. In other words, the usuge.
Collapse