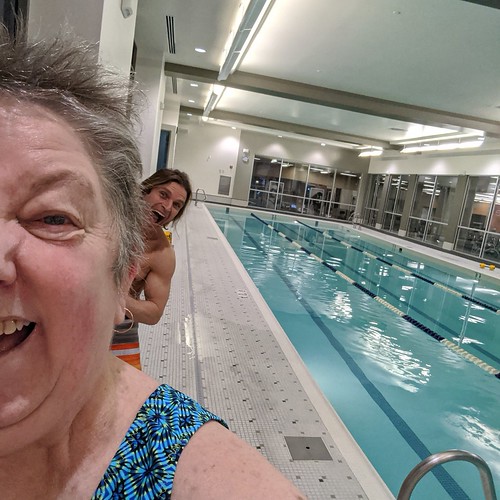 This is Karen's husband. I think his name is Michael. He's adorable. karen gave up on the pool because it was too cold but he still comes a couple of times a week.

I need a new make ahead breakfast plan. The hash brown cups were great for day one and two and good for day three but the hash browns started tasting like soggy sticks and finally, today, I just gave up and scrambled some eggs fresh with toast. Too much trouble for every day but good today.

I got out two eggs to scramble this morning and both of them had double yokes! That's got to be a sign of something. Usually I see a double yolk once a month or so.

Anyway, I have two new ideas to try and the ingredients for both on hand. I may actually do both and have a bake ahead breakfast bakeoff. I'll put some of both in the freezer to see how they do there.

And, pretty much, that is the plan for today. Oh and I need to change up my swimming playlist. It's getting old. So, yeah, big doins!

The cats are good and so far today seem their usual selves. It's another rainy day. We've had a particular wet winter here. I don't mind it one tiny bit but the folks in flood plains are having a rough go. 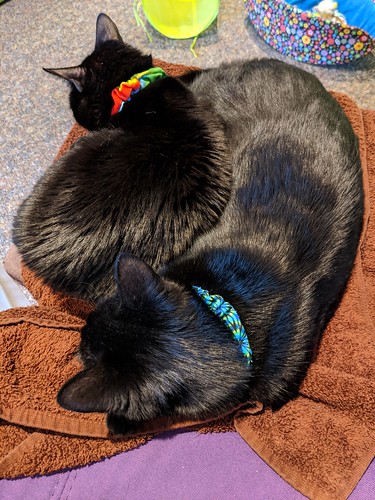 These two napped like this for about an hour and then, together, without a sound, got up and left the room. I wish I could read their brain.

I made a quiche for lunch. I generally make very good quiches but this one was only barely acceptable. While I was eating it, I ordered dinner from Door Dash. Korean Fried Chicken with biscuits from Bok a Bok.(I love the name - its called that because when you say it out loud, you sound like a chicken!) It will be here before 6.

I also got more TV today. For the past several years. I've canceled all but just the very basic cable after baseball season ends. To get the channel that has the Mariner games, I have to also get this expensive package of channels most of which I never watch. So when there is no baseball, I cut back. Saves me about $80 a month.

One of the reasons I do this, instead of just cancelling cableTV all together and just listening to the games on radio, is my cable provider, and, more importantly, Katie. Katie is a sales rep I found there several years ago. At the beginning of the season, I send her an email and ask her to turn on the other channels. She does. At the end of the season, I send her an email asking her to turn them off. She does. Could not be any easier. PLUS she never fails to toss in a goodie. Either a price reduction on my TV or my internet feed. OR, like today, she said it would be August before I was eligible for anything (but, she had a note on her calendar to recheck them and let me know) so she turned on the Encore channels for free.

Oh and I sent her the email yesterday and then wondered if maybe she didn't work there any more. So I sent a Tweet to Wave Broadband and asked them to look her up. They replied in 15 minutes, that, indeed, she was still listed as an employee. I'm lucky to be one of the few who live where you have a choice in cable companies. I'm lucky to have alternative to Comcast. So... today I'll be catching up on what horrible decisions those people on House Hunters are making this season.

I also got a note from the Mariners that as a premium season ticket holder, they are giving me MLB.TV for free for this season. That is giving me the sleeves off of their vest. MLB.TV blacks out all Mariner games. It's a heck of a deal if I want to watch any other team. But, I don't.
Collapse