My dinners have been so wrong lately, too much, too little, too boring and too much trouble. So last night, I Door Dashed it. Mongolian Beef from a restaurant I have never tried before but is close by.

So, I think for a while I will be Door Dashing my dinners. So far their servings have been generous enough to allow for multiple leftover meals. There are a whole lotta very excellent Door Dash options that I know about now and more that I probably haven't even discovered yet.

I'm energized by the prospect. Next up will be Korean fried chicken but I think tonight will be more of last night. Lovely to have removed the dinner stress.

Biggie's collar is just too tight. I just made him this one last week. I think it was too tight from the get go. I don't think he's grown that much in a week. I took it off of him this morning and he's been running around naked and it's hilarious. He grabbed the collar and drug it around for awhile and now he's just running around noiselessly. This fix it at the top of today's agenda.

There may be laundry today. And general tidying. The trash needs to go live in the dumpster in the garage and other things need to be picked up and put away. But, other than that, the day's schedule is wide open. No telling what will happen. 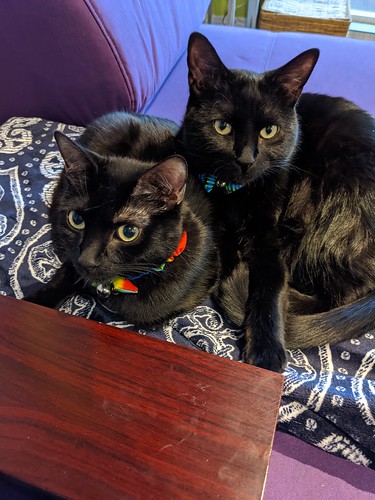 I went to Grocery Outlet this morning just to see... And man, was it a sad sack. Probably 25 percent of inventory was left. 60% off. But, there is no way there will be anything left by February 15. Sad trombone for sure.

The Smalls is leaking. Mucus out of his butt. It's clear and does not smell but still can't be good or a healthy sign of anything. He does not seem to be in pain at all. Or even uncomfortable or even notice much. He's eating fine and pooping fine. I'd take him to the vet but 1. the vet isn't open on Thursdays and 2. they have't fixed the leak the last two times so what makes me think they are going to fix it now? They will just give me more pills with which to piss him off. I think this time I will wait.

But, almost more concerning is that he and Biggie are getting into some mean fights. I can't even tell who is picking on who. I just hear hissing and squawking coming from a giant tumbling ball of fur. And then they go to separate corners.

When I came back from Grocery Outlet, they were asleep together in their usual pile on the bed on top of the fresh laundry.

So maybe the bar fights are a show for me.

And then Biggie got possessed with something new. On the wall. And spent a huge amount of time like this. 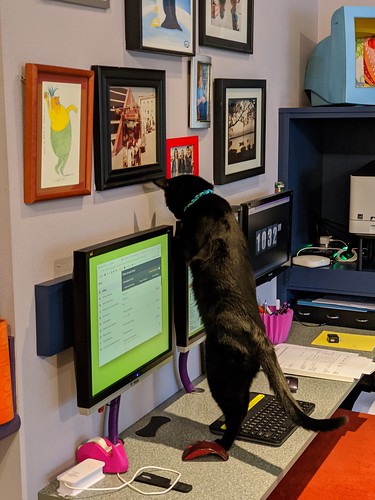 I think maybe he is over it. I hope so. There's a lot of damage he could do there.
Collapse