I look down my nose at evangelists, whether it's religion, or food beliefs/habbits, or lifestyles or anything being pushed onto me.

I don't do Facebook, never will and honestly resent that everyone else does.

I am a card carrying snob. And the people I most resent are snobs. So... problem.

It's honestly something I fight ever day. And I do mean every day because I really am a snob about livejournal content. I hate those endless silly questions. And that so many people rely on them for their total content.

But, why??? Why in the world would it even matter to me? When I stop and read the answers, like I did this morning for some reason, I always find nuggets of interest. So what the hell is so grand about being high up on the horse about them? Nothing.

I so need to get over myself. Starting right this minute.

I went to the home owners association board meeting last night. And, as I suspected, the election of this board is considered by those in the know as a coup. They did not vote these folks in as much as they voted the former folks out. But, I did not expect these new people to be as on top of shit as they apparently are. While none of them has lived in the building for longer than 2 years, they are not all kids. There are two young ones, and three in their 50's. 3 women and 2 men. Far more diversity than the group that has ruled for the past 5 or 6 years. I'm not wildly hopeful that everything is roses, but I think there might be some positive change and I'm more hopeful that they won't immediately do a bunch of stupid stuff.

They actually did make one change last night that I heartily approve of. Every two years, the association hires chimney smiths to inspect our chimneys. For the past few times, the inspection has been voluntary which I always thought was stupid. If there's a problem in a chimney and someone lights a fire, the entire building could be at risk. So those inspections and any needed repairs need to be mandatory. They voted last night to make them mandatory and to move up the next one sooner than the schedule would generally call for.

My swim this morning was good. I wore the suit I made yesterday and it worked nicely and felt fine. I'm still doing the kickboard but I'm going to find another way to do leg/core work. I hate toting that thing every day. It's too big and too cumbersome. I think, for starters, instead of the 4 laps of kickboard, I'll do 4 laps of jogging. See how that works out.

The cats are full of themselves this morning. They've had several high speed chases and a couple of heated discussions. The Smalls has now gone back to bed and Biggie is making his rounds of high places and food sources. He's coming very close to knocking over the web cam. I'm not wild about climbing up there and putting it back so I'd just as soon he did not. (You can clearly I had to tape together the tetris light because someone would just not leave it alone.) 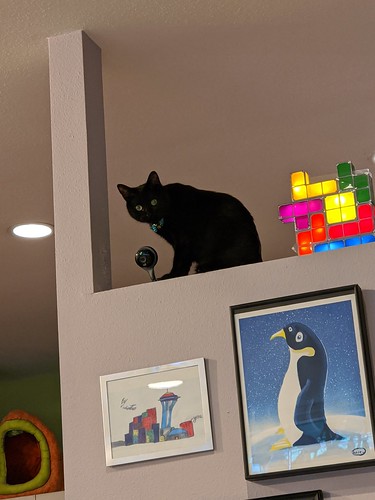 Nothing on tap for today. Maybe I'll gather up all the tax docs that I have and fill out the form my CPA sends. It's a piece of software clearly built in the 1800's. I have to use the windows laptop for it which is annoying so why not just get it out of the way today. Good plan.

I grew up before Mr. Rogers hit the airwaves and became a thing. I was a Howdy Doody, Pinky Lee, Romper Room kid. (My claim to fame in elementary school was that I went to the wedding of Miss Melissa on Romper Room. My Dad was her dad's boss.)

So I never was even invited to the Mr. Rogers cult. I do like Tom Hanks. And the other day I heard someone who's opinion I admire say that even though she was also too old to have been a Rogersarian, she enjoyed the movie a lot.

Today I watched It's a Beautiful Day in the Neighborhood. Lemme just say that I do not feel compelled to love all Tom Hanks' movies. This one was not my cuppa. Oh well, at least I can mark it off my list.

I treated myself to a new bracelet that arrived today. It's a medic alert bracelet. 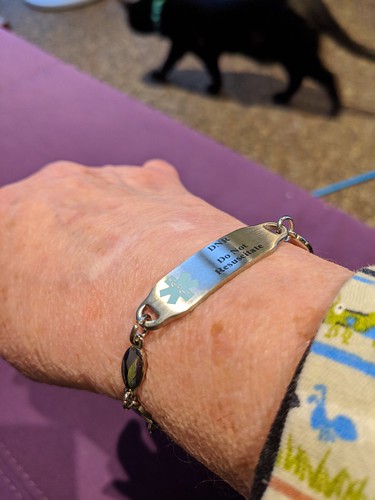 I've worn a silicone DNR bracelet for years but this is much nicer. Plus it looks more official. One the back it says NO Trach and Do Not Intubate. I have no delusions that anyone will actually check it (or my phone which also has that message on the front screen) or, if they do, comply with my wishes but, hey, my chances are better than if I did nothing.
Collapse