Yesterday morning while I was wobbling high up on a ladder changing out the ceiling fan light, I heard a cat throwing up. I wanted to know which one, but bouncing off that ladder would have not ended well. I finally figured out it was The Smalls.

He just seemed so fragile all yesterday. I started thinking about how Biggie and I were going to manage without him.

About 1:30 this morning, he was dancing on my face which is Smalls-talk for FEED ME NOW! So I did. He let me sleep until the alarm went off. Then, this morning when I opened the door coming home from the pool, there he was in his usual spot ready to make a break for it into the hallway. He hasn't done that in days. There was not a morsel left in either dish and he was not even going to let me get my coffee.

Now he's teasing Biggie and they are having some major cat on cat action. I guess we're done with fragile for now.

I know that one day - maybe even sooner than later - we won't have him any more but, for now, it's "Smalls!! leave that alone!"

I did get the ceiling fan light fixed. With Alexa's help. I was able to turn the light off before I got up there, swap the bulbs and then get Alexa to turn it back on for me to check before I even got off the ladder. I am too old and too fat and too wobbly to get on ladders. I need to not do that any more. The last bulb lasted 15 years. I'm hoping the same for this one.

I finished the body of my sweater and tried it on. It fit fine. It looked so horrible, I couldn't even take a picture of it. The stripes were exactly perfectly wrong and the pattern itself carefully and accurately highlighted the very worst parts of my figure. It was comically horrible.

Ordinarily, I'd just toss it. But, this is wonderful alpaca wool so I unraveled the whole thing. I wound it into balls by hand. Fitbit thought I was walking and gave me massive numbers of steps for the effort which helped. I found a new pattern and got it started. We'll see how it goes.

I just got my USPS email about what will be in my mailbox today. More junk mail from Humana. I used to think it was Comcast who kept the postal service afloat with their junk mail. I think Humana is giving them a run for their money. I should start tracking how much trash they mail me in a month or a year. Nope. Too depressing.

My swim this morning was excellent. No sun.

I pulled out the fabric and pattern for a new swim suit last week and that's as far as I got. Today I will get the fabric cut out, if nothing else, because I'm sick of seeing it on the dining room table!

But, first I'm going to get dressed.

I did not do the bulb changing thing unaided... 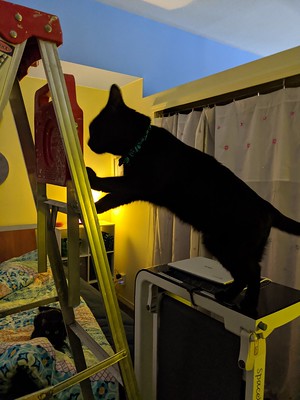 Today both Biggie and The Smalls are themselves. They are doing the things they do when they feel good. They are hiding in their favorite spots. Picking fights their favorite way and with vigor and enthusiasm. They are even eating they chicken I bought tons of before they decided they liked tuna better.

And, right now, they are napping together here beside me. If we never have another good day, we had this one. I'm hoping we have bunches but I'm ever so grateful for this one.

My new Dyson heater is earning its keep.

I did make up the new swim suit this morning. It's not my best effort but it will work fine and I'll just have to swim faster so no one will notice that the elastic isn't evenly scrunched.

I think I'll do a little TV and knitting until time to go down to the HOA meeting. 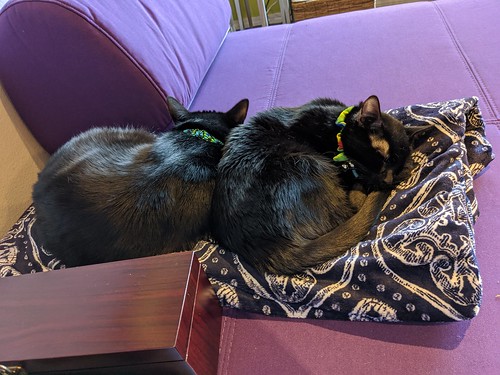