I'm getting less and less interested in swimming on weekends. The only up side to it is that the pool is near a wide variety of grocery stores and if I need groceries, that's handy. Today I needed a Home Depot stop which is on the way. But, otherwise, weekend swimming has just gotten annoying.

Today was the worst. The pool does not open til 8. And the sun is out. And one whole side of the pool room is windows. And the glare is horrible. It hurts my eyes and ruins my swim. (The permanent lenses they put in when I had my cataracts removed do not filter out glare as well as real ones.) Even when I use my polaroid googles. Today I was swimming along miserably and thought "I don't have to do this!" So I stopped. At a little over a half a mile - 35 minutes. I'm ok with that. New rule. IF sun out THEN no swim. The end.

I was sitting on the bed this morning intenetting when the light in the ceiling fan went out. I got the ladder and climbed up to find it's a circular compact florescent bulb. Ugh. So while I was swimming I thought hmmmm surely there's an LED version. I popped into Home Depot to learn that the info I got off the burned out bulb was no the info I needed. All I really needed to know was 8, 9 or 12 inches. A really nice, attractive, 50ish man helped me and, I realized when I got back to the car, was kind of flirting with me in a lovely, respectful way! Been a while. I forgot the signs. I was retroactively very flattered. We figured out I needed 9" inches. No LED. I thought I'd come home, Amazon the LED version and then return the Home Depot one. Except... the only 9" LED version was on eBay. Nope. Thanks, tho.

So, in a bit, I'll get the ladder and risk life and limb and swap out the bad bulb for the new one.

I made new breakfasts yesterday.

Thawed frozen hash browns, patted them dry, added an egg and then molded them around the edges of muffin cups. 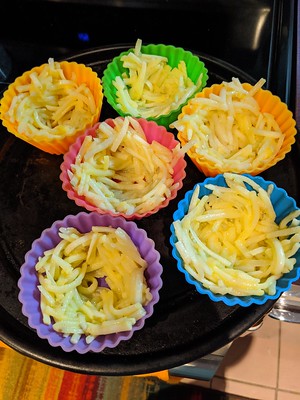 I baked the muffin cups until the edges were fer sur crispy. Nearly too much but whatever. 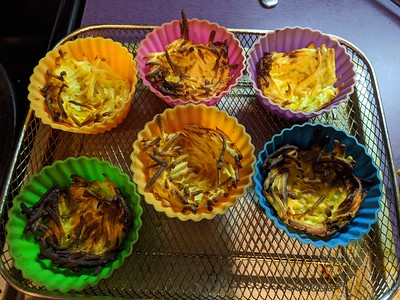 Then I cut up sausage patties and put some in the bottom of each with some cheese. 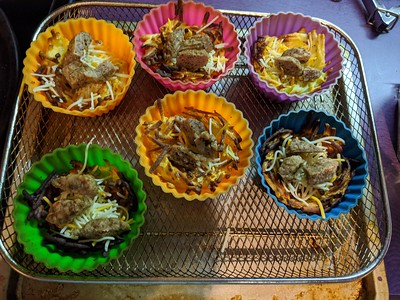 Then scrambled up some eggs and dolloped each cup with some and topped each with more cheese and put them in the fridge. 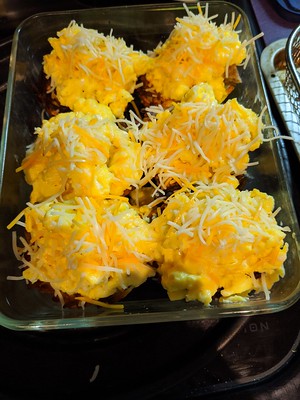 Then, this morning, I pulled out one and nuked it for 60 seconds. 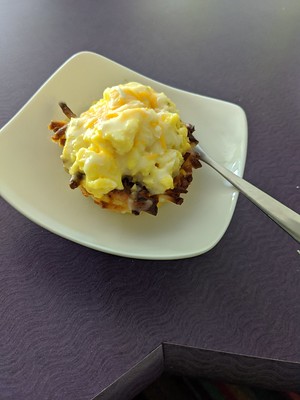 Pretty freakin' delicious. Needs salt, tho. I salted the scrambled eggs but apparently not enough. No big deal... Breakfasts for the week... very big deal.

Assuming I live through the bulb changing process, I'll be finishing off the body of my sweater today. It occurred to me that since it is knit from the top to the bottom, I could have, anytime in the past few days, tried it on. Or at least measured it. To see if it's going to fit the way I want it to (not tightly). I could be ripping the whole thing out again... We'll know more later today.

I'll be watching TV while I knit but I have negative interest in football. Happily, I have lots of options.

Today's is my Mom's birthday she died in 2005 after living 82 excellent years. I was remembering her birthdays and two stand out.

When I was 6 and my sister was 5 and my brother was 2, my Dad took us out shopping for a birthday present for Mom. This was huge is many ways. My Dad traveled a lot and was never home. When he was, he rarely took all of us on his own. And when it did it was for fun stuff like sledding or the zoo. Shopping??? I think back on it now and it's kind of amazing to think he even did that.

It was wonderful. We went to Macy's which was wonderful. (This was in Kansas City, Missouri.) The whole thing was magical. We bought her some beautiful - I mean to a 6 year old girl they were the most amazing wonderful beautiful house slippers ever. Pink with a big fuzzy ball on the top of each one. (The antithesis of my Mom's taste by the way.)

All the way home - even over the ice cream we stopped to enjoy - my Dad kept telling us over and over again that this was a secret. Do you know what secret means? We cannot tell her. It must be a surprise. When she opens the package tomorrow morning. We cannot spoil the surprise. It is a secret.

So, of course, we walk in the door and Mom greets us and my sister blurts in her most excited voice "They sure do have gorgeous slippers at Macy's!!!!!"

It was our family code for all secrets from then on. "Where ya been?" "They sure do have gorgeous slippers at Macy's." "oh, ok"

Her other birthday I remember is her 80th. She picked the restaurant. I made the arrangements. My brother and his wife came up (to Charleston, SC) from Jacksonville. A limo picked them all up (also included was my Mom's BFF) and took them to an elegant dinner with appropriate birthday acknowledgement, waited for them and took them back home. The woman from the restaurant called me after to report that everyone looked like they were having a great time. I thought that was so classy. Mom had fun and that's what counted.

Miss you, Mom. If there's an afterlife, I hope you are having a great time. 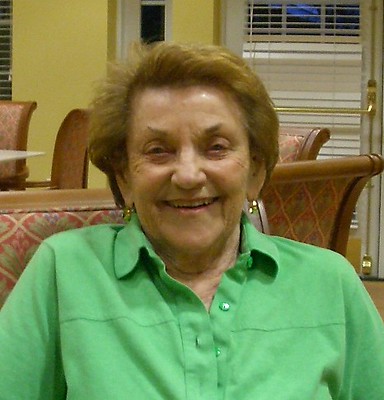