So... last night, I made great progress on my sweater yesterday. I got down to the point that I only had about 5 inches left on the back/front and then the sleeves left to go. And then. I discovered. I made a fatal error just after finishing the neck. The instructions for this sweater are kind of minimal which I like a lot. But, when minimal, ever word and every bit of punctuation matters. The instructions say to increase stitches on both sides of the cables. I read increase stitches at the sides.

If I were knitting just for knitting, it wouldn't matter and I seriously considered going that route - the doesn't matter route. But I really like this pattern and I really like this yarn (alpaca/wool). And I'm enjoying the doing so, what the heck. I ripped it out up to the neck and will start again today.

I had gotten about 5 inches beyond where I was when I snapped this shot. 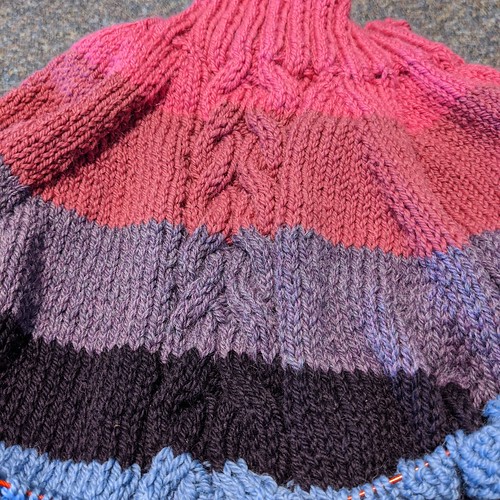 Here's the photo from the pattern. What it's supposed to look like. 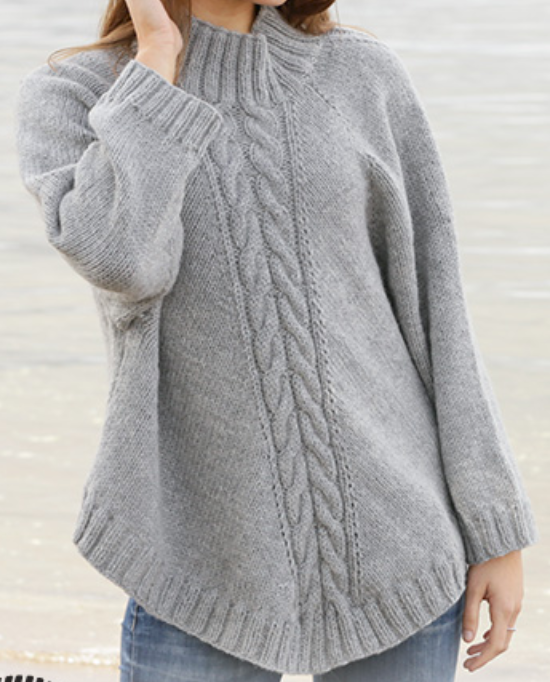 I'm ok with the makeover. It's a fun sweater to knit. Interesting and not fiddly. And now I truly understand the pattern!

I've been using a tiny little appliance to keep my nose passages open while I sleep. I've only used it a few nights and I'm not sold. Last night I took it out in the middle of the night and put it on the night stand. I knew at the time that was wrong. But I did it anyway and now, of course, it's gone. If it's in Biggie's tummy and I have to pay another biscillion dollars for obstruction surgery, I'm going to be most unhappy.

I'm afraid to wash my hair. I cut it yesterday. I cut it dry with the electric clippers and I'm not sure what it's going to look like after it's been washed. Tomorrow it will get wet when I swim so maybe I'll just put the bad news off a day. I haven't looked in the mirror yet this morning. It may be time for a buzz cut.

I ate the last of the leftovers from my brother's visit this morning. Half of the omelette he had at Endolyn Joe's. It's been in the freezer and survived very nicely. Yummy. But, now, no more leftovers from his visit. Bummer.

A few years ago, one of my favorite book characters died. Well, actually, it was the author who died. I was pissed. Another guy took up the series and has tried to keep the character alive but nope. Not for me. The original author took the magic with him.

Today, another favorite character, who's author is not old but no spring chicken, got maybe a more promising future. Jack Reacher (not the movie Jack but the book Jack)'s author announced he was going to start collaborating with his brother who is 15 years younger with the plan of brother taking Jack Reacher over in a few more years. My hope is that this will work perfectly and Jack will live longer than I do. AND as a bonus, I now have all of the books that his brother has written to read. Plus, the current series is now so old that I probably can re-read it from scratch. No way I can remember all those plots.

Tomorrow I have to go out anyway, to the pool, so I think I'll just do my errands - mainly Trader Joe's - then and stay in today. It's a wet gray day and so perfect for not going anywhere.

Besides... I have a sweater to reknit.

I got out the 13 gallon trash bags today and did a small section of the house that was crammed with crap. I filled one bag for Goodwill and a half a bag for trash.

I probably went outside (while the sun was out) last Summer maybe 12 times. And that includes baseball games. My car lives in the garage. I park underground at the gym. I hate hate the sun so I avoid it if possible. Every time I cannot avoid it, I use sun screen. My skin is beyond repair but it is not beyond sunburn which it will acquire after 2 seconds outside.

So if there's a chance I am going out in the sun, I buy sun screen.

Apparently I did that about 12 times last Summer. And, in the pile o' shit that was crammed into my entry way, I found no fewer than 6 separate containers of sun screen. (And I have more in the bathroom stuff.) I crack myself up.

And bluetooth keyboards. I have a biscillion. Well at least 6 that I can think of without looking. And I found another one in that pile of stuff.

Hoarder? Me? ok, yeah, but at lest I specialize in weird stuff.

Next up is the hallway. I have a very long hallway with shelves down the entire way. I have a fuckton of shit on those shelves. I am going to get more trash bags and remove exactly half the stuff. Half. I'll make an exception for the fabric. It stays. But the half of the rest. At least.

If I cannot part with half of it, I'll take some and put it in hiding. If after a year I have not touched it, it goes. Make that six months.

This week. That will happen this week.

Ok, back to knitting.
Collapse