I went swimming this morning and it was lovely. Turns out, my absence was noticed by a lot of regulars who let me know which was just nice. Even Front Desk Frank said he was happy I had returned. And the guy from VietNam who has very little English and swims every day had wildly enthusiastic gestures to let me know he was glad to see me again. Pretty fun, actually.

Initially, I thought I'd start off slowly and probably only do half my normal swim but once into it, I figured why waste the wet. So I did my normal 1,500 yards and, turns out, without any loss of speed. Nice. And really nice to know I can take time off and then take right up where I left off.

While I was swimming, I further planned the tunic top I'll be making today or at least starting. I'm confident that it's either going to be the best thing I've ever made or a complete disaster.

That's about all I've got on the plate for today. Oh and I need to make a seat cover for the blue chair. These cats do not shed much but they sit in that chair enough that it now has a layer of cat hair on the seat. I need to get that layer off and then just put a square there that I can easily wash.

It looks cold out and feels cold in here but really it is not. It was about 40 this morning while waiting outside the gym for it to open. Not really bad at all. No snow in the forecast. Sigh.

I randomly just checked my cable tv bill and discovered that HBO and Cinemax are having a free weekend so I went to their schedules and found several things I'd like to see and told TiVo to record them. Nice. One of the things playing is my favorite movie of all time - Paul. I have it on DVD and on TiVo but now I will have a backup copy.

Time now to hang up my suit and get myself dressed and get going on this day. 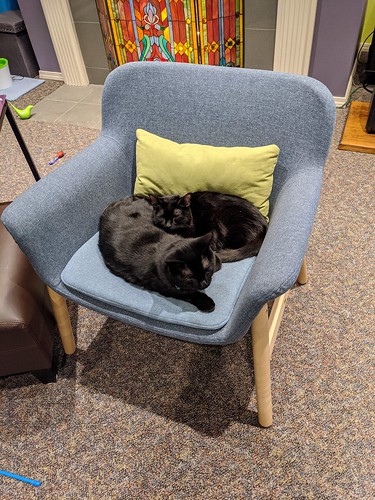 I sat down to get started on my sewing which was to serge two pieces of fabric together... I flipped the 'on' switch on the server and nothing. I checked the connections. Everything good. Plug live. Electricity coming from wall socket. hmmmm

Light out. Bummer. I ordered an LED replacement. It will be here tomorrow. I have a little stand up flashlight with a crane neck that worked enough. I'm using 4 fabric pieces to make this top. They do not match but I'm hoping they are symphonic enough to work. 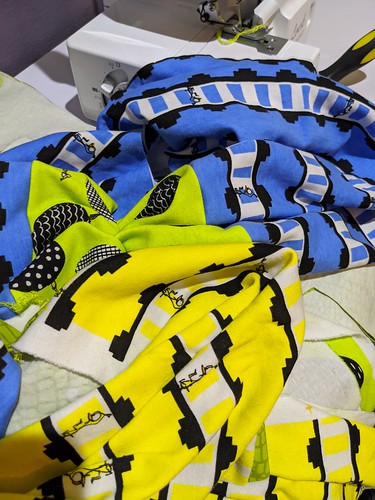 None of the pieces are big enough on their own so first I had to piece them together. But, I got it all cut out and stopped to make notes of what I did. Tomorrow I'll sew it up. Also the fancy fabric is due to arrive tomorrow.

I have one ready-made (as in not made by me) shirt in my closet. It's one I got at Goodwill a while back and kind of my 'dress up' shirt. I wore it the other night and noticed it had a button missing. I checked the sames and, yep, there were two spares there. I think this is the first time in my life I've ever needed a button when there were spares. And I've had a long life!

Baseball cheaters are blowing up my Twitter feed this afternoon. A lot of names of players I really hate to see us play against are coming up as cheaters and drug takers and/or those who have always known it was happening but never said a word. Nice day for baseball. Ugh.

My afternoon will be knitting... mostly.

In 1949, creative naming of babies was not a thing. That year, the most common name for girls was Linda. And, that was my parents' first choice for me, their first baby. But, they had a dog named Linda so I got choice number 2. Susan. Susan was the 5th most common name that year. But in Winston-Salem, NC it was tops.

I rarely had fewer than 5 or 6 other Susan's in my class at school. We were kiddy litter sprinkled all over everywhere. When I was still in elementary school, I thought Diedre was the perfect name for me and no, you would not be allowed to call me DeeDee. In Junior High, I changed my imaginary name to Stuart. Also changed my last name to Caldwell. Often when I met strangers, like on a bus or something, I'd tell them my name was Stuart Caldwell.

When I went to a fancy private high school where many of the girls had been given their mother's maiden name for first name. Brooke, Gray, Marshall... Susan was even stupider sounding there but there were fewer of us.

When I was in my 30's, I got online for the first time. Electronic Bulletin boards. The other people on those EBBS were male people. Mostly kids. I used the 'handle' Susan and got me some attention. Those kids were thrilled to talk to an actual girl and, in turn,they taught me probably 50% or more of what I know about computers today. Had my name been something less feminine, I'd probably be a retired shoe salesperson with a rotary dial land line and a diary with a lock and key.

Now Susan a name reserved mostly for old ladies - at least the ones left. After 70 years, I've gotten used to it. It's an ok name. 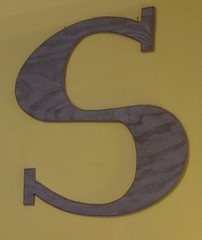 Redeux - an entry I wrote several years ago about all the nicknames I have had...

(And can I just say that the LJ search situation is about 4,000% better than it has ever been. I used to maintain and offline archive of this journal mostly so that I'd have something that was easy to search quickly. LJ has built that now. Coolio.)
Collapse