My brother is on a plane and we are ready from him to get here. Almost. I have two errands to do first. And, probably, I should shower and get dressed but otherwise, we're ready! He lands here at 3 so yeah!

I ordered a new smart dead bolt for the front door. It's a new product. Actually, it's not even out yet but the company's early adopters (that's moi!) got a pre-shot at ordering so I did. One email alluded to an early January delivery so I got to hoping it would get here while my brother was here so he could help me install it.

This morning I got notice from the post office that a label had been created in Seattle. The company is in Seattle and the last time they shipped me something, the label notice was the first clue. So the lock could be here maybe even Thursday!

Oh! I just remembered another errand I need to do this morning.

I have always had a giant blind spot when it comes to time zones. And, now, with Google, it's worse than ever. Sometimes Google adjusts for me and sometimes it does not and I have no idea which it is doing at any given time. Austin is 2 hours ahead of us. My brother's plane leaves at 10:50. Which is really 8:50 but is it? I got a text that he was waiting to board and then crickets until much later when he tweeted out asking the Austin airport for more info on the emergency they just announced and then I thought the whole trip was derailed but now it looks like all is fine and he is on his way winging it to Phoenix and then to here. That's about 30 minutes of fretting that I'll never see again because I cannot tell time. Maybe when I grow up.

Ooops just fell down an internet rabbit hole. Although I do love it when after, visiting a website that is just horrible and really pisses me off, I get offered a survey.

Ok, now I'm going to take a shower. And do a load of laundry. And then go run errands. At least that is the plan.

This is from the other day... The cat tree is really looking loved... teeth marks all over it and the wooden base is decorated with cat claws. 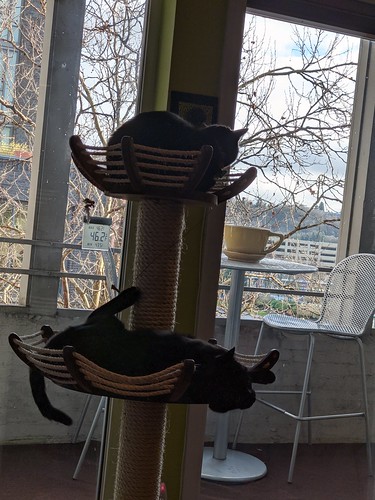