The big question of why in the hell I'm so obsessed with this mattress pad remains a mystery. Truly. But, I am obsessed.

Amazon's shipping options post holidays are very fluid. Yesterday, the choices were: Delivery by 8 am today(Monday). Delivery on Tuesday.

The problem with 8 am deliveries is that their drivers are not allowed to call until after 8 so they can't get into this building or even let me know they are at the front door. And I don't think they are allowed to leave the boxes on the street.

So... I ordered anyway. For delivery today before 8. And when the sale was finalized it said Delivery before 8 PM. Now, I knew that was not going to happen. So about an hour later, I ordered again - this time ensuring it was 8 AM.

This morning I woke to discover they had bundled the orders and both are now set to arrive by 8 AM (oh and I canceled yesterday's). The tracker app has gone into 'foggy mode' 'The Driver Has Several Packages To Deliver Before Yours.' There are delivery instructions. I modified them to ask the driver, if no call, please text so I could come open the door.

I skipped my swim this morning and probably for the next week and a half. I'm ready for a break and my brother's visit gives me a good reason/time frame. I didn't even sleep that much longer but I enjoyed it enormously. I got up to pee and feed the cats and then snuggled back in. Before long, Biggie joined me pressed right up against my back and then there comes The Smalls pressed right up against my chest. It was the nicest snuggle.

I have an actual todo list today which may or may not include going somewhere to buy a mattress pad. And/or returning one of the two that Amazon may or may not deliver. I need milk and some other supplies. And gas. A short list.

Also the building manager thinks he wants to install the router today and is looking to me to do that. It's an Eero so should be easy breasy and as should rehooking up the Nest cams but I have learned from experience that nothing involving that dude is either easy or pleasant. So I'm really looking forward to this. Not.

It's now 7:59 am and this is what the Amazon tracking shows: 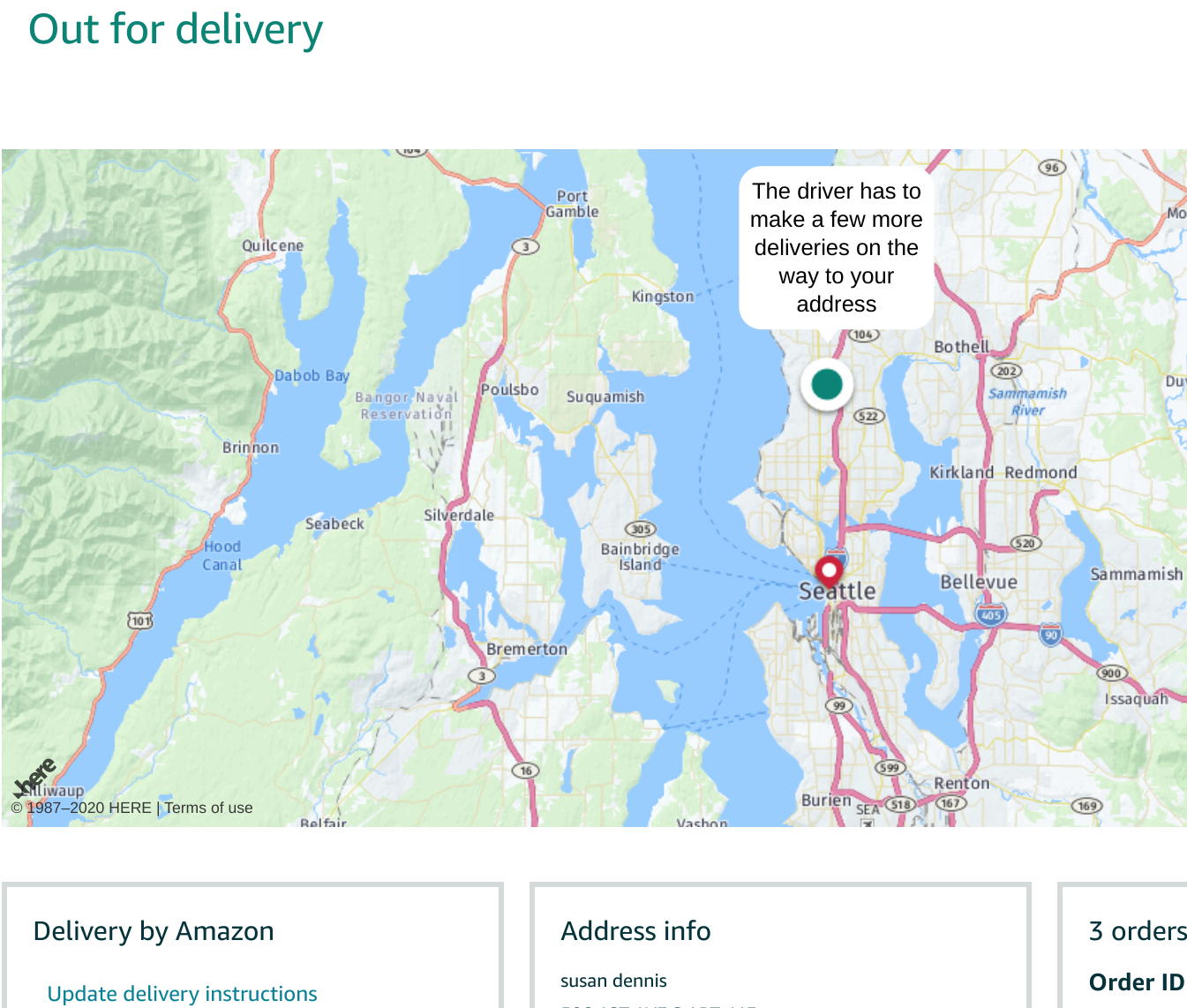 Now it is 8:01 and they have added "still arriving today" under Out For Delivery. This is actually good news. It means that if delivery before 8 am fails then maybe there's reasonable recovery.

I'm going to get dressed now.

The boys this morning

All morning I sat around and waited for the building manger to let me know he was ready.

me: Whenever you are ready, just ping me. It does not even have to be this week.
him: Oh I'll have time tomorrow morning, let's do it then.
me: Whatever is good for you, just let me know.
hin: Tomorrow morning.

He had been our for a week at Christmas. Back for a day and a half and then out sick since. Today was his first day back. So I pretty much knew this morning was not happening but I waited anyway.

Also I was waiting on Amazon.

Never heard from him. Amazon now says 9 pm tonight. I looked all over town (on store websites 'available in your store' - so nice of them) and I could find none that I liked as well as the Amazon one for any price.

I needed milk and eggs for my brother's visit but I really needed kitty litter desperately. My Amazon kitty litter isn't getting here until Wednesday and I wasn't going to make it.

So, I headed out. My plan was to go to a small grocery not horribly far but not close either. Grocery Outlet - the very closest and easiest by far - was on the way but they rarely have kitty litter. But, hey, I was there and it was easy to pop in so I thought I'd check.

Clearly my luck had turned. They had a little supply of Arm & Hammer - fine by me. So I also got eggs and milk. The smallest milk was half gallon which was way more than I wanted but then I remembered a quart wasn't going to be enough for a week of bro's coffee so I would have not gotten enough at the regular store. Thanks GO! You are a life savor.

We have new recycling laws here in King County. I don't have a clue how they are going to work for people. Happily, out recycling is handled privately and so far no word of change. I know why they are doing this but ugh. No more plastic bags or wraps. And they cannot be put into garbage either. All the plastic has to be taken to specific drop off spots. So, your used kitty litter, which has to go in garbage, you put that in by the handful???? I do not get it. But, thankfully, I do not have to.

I just read that 16 years ago we had a bunch of snow so I went back to look at my LJ entries. Bunch is clearly relative. And my photography skills sucked as badly as my camera but fun to see.

Here's a snowman for Live Journal on my terrace

And through the spin wheel that view is history. There are now two giant buildings there.

But, this view is pretty much the same. If it snowed today, I could grab the same shot.

This was the view at the corner - also now, very much more dense. That's the Amtrak station with the tower there.

Fun. Back in 2004, I served up all my photos from susandennis.org. When I abandoned that domain, I moved them all to replicated folders on susandennis.com but, apparently, my global search/replace operation missed a few. So most, if not all of those entries are photo-less until I go in and edit each one to swap org for com. Tedious and probably not happening!

While I was waiting this morning, I did do a powerwash of this chromebook. Reset it to factory specs. It was time. It's a little perkier and there are some websites it was pissed at but apparently now likes again.

So really not a wasted day at all.

4 pm - that's when the delivery got here. When I went down to pick it up, the building manage said 'maybe tomorrow?'

I was kind of looking for 'so sorry I did not get with you this morning like I said I would. I'm hoping for some time tomorrow. Would that work for you?'

But, hey, he's young and clearly raised by wolves.

I told him to let me know when he was ready and I'd be in and out and happy to help if I was available.

The mattress pad is ok. Not fabulous but better than any other mattress pad I have now so it will be fine. It was not expensive so I'm ok with it.

I got a flag on Instagram earlier today that I had a new follower. I didn't recognize the username so I ignored it. Just now I went in to check on everyone and looked at her feed, and it's Amanda - the girl that does the front desk at the gym on Mondays! Fun! God she takes a good picture. I mean she is really pretty but in her selfies, she is breathtakingly beautiful.

I sent her a little note to congratulate her on her find and see if she missed me this morning and she apparently really did. I told her that I'd be gone next Monday, too but that would be the end of it so she should save my spot. Fun.

I have one final episode of this season of Janet King - turns out there were not 40 episodes - only 24 but I'm grateful nonetheless. I have one more season in the bank. I'm saving it.

Then tonight I'm going to finish my current book - The Middlesteins by Jami Attenberg. It's a relatively short little novel about a very fat Jewish woman. The author has a really unique story telling method. I'm clueless how it will end. But when it does, I have two more ready and waiting. They are both preorders - one by a very favorite author - Thomas Perry and one a first time novel by a woman who's non-fiction I enjoy. They both release at midnight tonight. I rarely have my book situation be this tidy.

I think they were having a meeting. 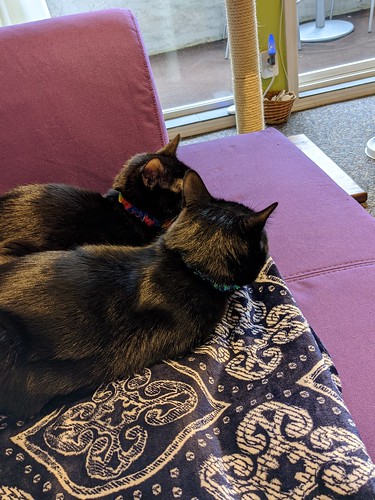