The cats decided that I should swim today. The Smalls started trying to wake me up. I protested. Then Biggie got in on the action and I gave up. And went to the pool. It was good.

Today is Costco day. I wrote the other day about screwing myself by thinking the insurance payout was based on when I paid for the drugs and not when I ordered them. New insurance year means new deductible.

letmesaythis had the great suggestion to cancel the prescriptions and get them to refill with today's date. So I spent some time this morning figuring out the cost of my drugs for the entire year. I have to figure in the deductible and the bizarre medicare pricing scheme. Turns out... what price I pay today makes no diff in the grand 2020 scheme. It's going to cost me $985 in 2020. It's a pay now or pay later situation. Good to know anyway.

I also have a Costco shopping list. Not a terribly long list but at least I have it written down.

Also today I may have to go down and install the building manager's router. The HOA president has 'gifted' the association her now unused Eero routers which will be much better than the piece of crap d-link that's there now. I told Jathan, the building manager, to ping me whenever he's ready. Then the Nest cams will need to be reattached. It's all easy stuff but with him, nothing is easy and if there is anything to stumble over, it will be stumbled over. Not looking forward to this but I did volunteer so I'll do it with a smile whenever he is ready.

OR I could convince him to wait until next week and let my brother have the honors.... so tempting.

So I got hooked on this Australian show Crownies. It's a decade old but I really loved it. One season 22 episodes. I finished them last night. No more seasons of it BUT, there was a different series that I thought I had watched on Acorn - Janet King - that was really a continuation (Janet King was a major character in Crownies). Turns out I had NOT watched the show in Acorn and there are 5 seasons of 8 shows each!! Much the same cast, similar story lines, etc. to Crownies... It's like thinking there are no more and finding 40 new episodes! I'm probably hooked up now til baseball starts again.

The tuffet I made a couple of weeks ago was just too big for the couch, I thought. So I tossed it back in the sewing room thinking I'd deconstruct it and reuse the stuffing. But, before I could get to it, Biggie found it and made it his get away spot. When he's missing from in here in the living room I can check the cam and this is from last night...

I'm not sure about the new toy bin and the cat jury is still deliberating. 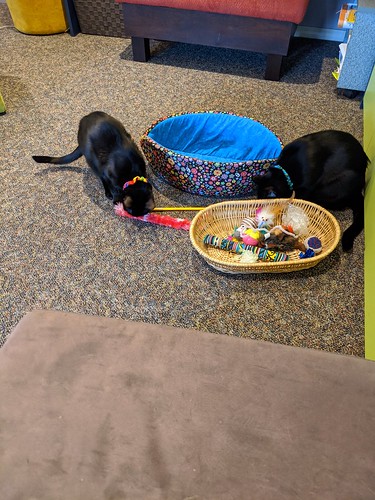 I have two new interesting question requests to answer before I get dressed and get the day started. I'm on it.

coercedbynutmeg was kind enough to point out that today is the first day of the lastest Costco sale. One time before I was at Costco on an odd Tuesday morning and it was packed to the gills. I could not figure it out and finally asked the cashier what clue I was missing. "first day of the sale flyer". DOH. noted.

Then I got a call from Sandy, the HOA president who told me that Jathan, the building manager is out sick today so that whole wifi thing isn't happening.

And then Biggie knocked over his kibble tree again... So I got it onto the examining table and found the problem and fixed it.

So really, I'm pretty much done for the day. Fine by me!

The Smalls is so funny about the kibble tree. He really has zero interest in dry cat food. Just no longer touches the stuff. BUT, he hates to be left out. So every once in a while, he'll wander over when Biggie gets busy in kind of a 'so, show me how this thing works again' mode. Biggie knocks some down for him and The Smalls then wanders off. 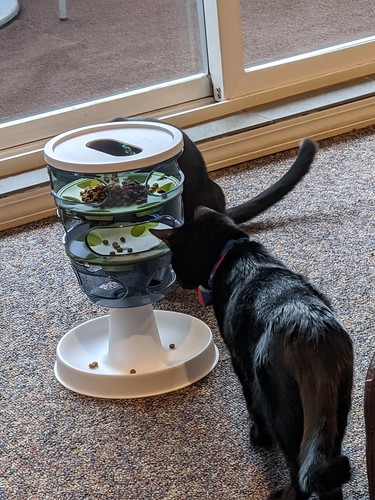