This week will bring a flurry of news/tweets/blog posts/even journal entries looking back on the decade... AND at least as many pompous blowhards pointing out that this is not the end of a decade - that the decade concludes at the end of 2020 (or even 2021).

So... that's my pompous blowhard moment for the decade.

It is cold here. Really cold.

On my way to the pool, I drive over an elevated on ramp to a high bridge. This morning, while on that on ramp which is a huge curve, my car shimmied out of control for a tiny bit of a second... twice. First I thought it was a tire and then I realized it was ice. Regardless, it was fucking scary. My whole swim I thought about what if I had died. Or worse, what if I had not and they had to scrape me out of my car and I landed in the hospital. I do not feed the cats before I go to swim. So that would be a problem. Among others.

On the way home, I went the longer less treacherous way. I told myself it was so I could whip into McDonalds and pick up a sausage biscuit. Which I did.

It really is chilly. I have the heater on. And The Smalls is sitting on top of it. 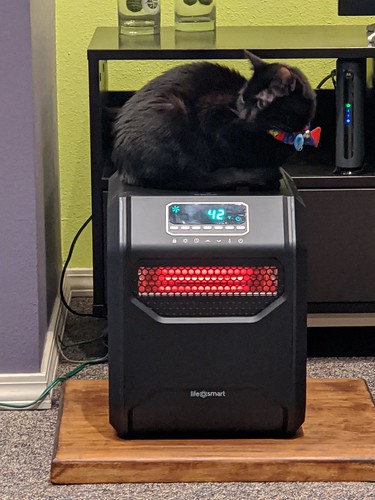 And speaking of cat food. I'm still struggling to find the right flavors/textures. Neither of these cats is really picky but man, when you serve something they do not like, they do not let you get by with it. First of all they will not eat it and second of all they drive you bat shit crazy until you replace it. This is particularly true with The Smalls. He's the real foodie. Keep Biggie's kibble tree stocked, and he'll love you forever.

I could stand to make a grocery run today but I'm not sure if I will. I have stuff here but I'm just not into what I have on hand. Particularly lunch stuff. What I really want is cottage cheese but Grocery Outlet - which is my easiest and closest grocery - rarely carries it so I'd need to make a major trip out of it and I really don't need that. So, probably I'll just stay home and 'shop' in the freezer/pantry.

Nothing on the agenda for today. Again. I love my life. But I am going to go put more clothes on. I think I mentioned that it is cold in here!
Collapse