I want a Waterpik Fusion toothbrush/water flosser and a Fitbit Versa 2. The latter will go on sale a week from Friday for $150 ($50 off) at several places but, it could go lower. The Fusion is $140 now but not listed in any of the sales yet.

I think it might be time to clean up the feed. I'm afraid now that I'll end up spending way more than I save and spending it on SIDN* (*Shit I Don't Need).

What I do need is cat food and steak and bacon and gum. The first will be a stop at the pet food store where I need advice and some small cans to try. They are finally getting into the prescription stuff after turning their noses up at it at first. Tomorrow I start weening them off of it, but, I think it's time to get them on some healthy food rather than the junk food I've been feeding them. Especially if The Smalls is going to have intestinal issues. I, of course, have a boat load of the junk food on hand so I'll be padding that in along the way.

The steak, bacon and gum are Costco items. I might or might not get there. So far this morning, I keep falling into internet rabbit holes. One this morning was a very hand Costco add-on site for ehealth where, finally, all the data is presented in an easy way to evaluate. When I first hit medicare, the insurance alternatives (medigap and other options) were a massive nightmare to figure out. I had the help of my doctor's clinic but it was really a mystery, the whole thing.

And the drug part was worse. Finally, today, for the first time, I was able to put my drugs in and get a print out of exactly what they will cost me month by month. Amazing. The cost is still too high - I have one inhaler that must be gold encrusted - but way better to know ahead of time! For the past three years I have submitted prescriptions for filling without having any idea what the cost would be. no more.

My swim this morning was excellent. The pool was totally sans ice chips. And it was not crowded which was nice.

The cats are good. Both of them. Finally.They are fighting and playing and eating and pooping and not throwing up and that's in the middle of the night. I wonder how long they will be kittens in cat bodies. Stickie lost another feather today. Poor Stickie.

The windshield fix it man comes this afternoon. I think I'll go get dressed. 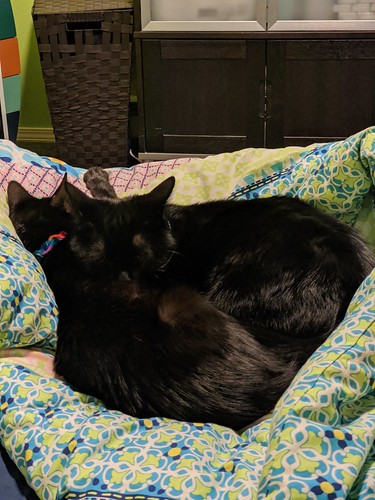 I also forgot to mention one interesting thing I've learned. Cats and pills. Biggie really likes pill pockets. So he's easy. The Smalls who likes no treats I've ever tried to give him, will have absolutely nothing to do with pill pockets. BUT, he's not too bent out of shape when I try to stick a pill down his throat. He puts up a bit of resistance but really not much. Biggie is solidly in the NFW camp on pills.

I put The Smalls pills on the shelf. The same place I had Biggie's pills before. Now, when it's time for The Smalls to get his pill, I go over there to get one and invariably find Biggie at my feet demanding a pill pocket. He gets one.

I actually did do the cat food store and Costco. The cat food store is such a nice place. They make it really hard to order online. Today, for instance, a nice lady gave me all kinds of advice and showed me two good choices to try. I got 3 flavors of each choice - 6 cans - and she only charged me for 3 cans. 'Save that coupon for when you come back.' I will, of course, be back. Such a nice store. (Mud Bay - it's a local chain.)

Then on to Costo which was pretty empty! And then I realize I had gotten there just as they opened. Still, a delightful experience. I got some of their locally made mac and cheese and their locally made bulgoghi. And steak and gum and bacon. I parceled out the mac and cheese into single servings. Most is now in the freezer. I'll cook up the bulgoghi tonight and then do the same with the left over. The steak is cut into my size portions and freezing now, too. Oh and I got a pumpkin pie. It was $6 and huge. I cut it up into 16 slices and froze most of those. I got food for a while.

Just as I finished up all that storing work, the phone rang and it was the auto glass people. Tony would be arriving in 30 minutes! And he did. He's down there now working his windshield magic. He seems like a really nice guy. So nice that I'll be having to tip him.

He said it would take an hour.

I feel like things are under control for a change and that is a very nice feeling.

About half the time, when The Smalls uses the litter box, he digs like he's looking for China. And somehow always gets litter on his nose. It cracks me up every time. 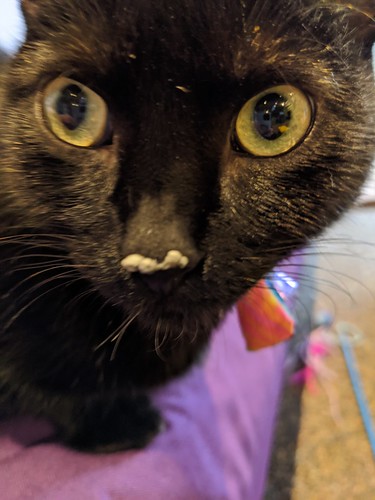 So when they told me to only feed The Smalls the prescription food, of course, Biggie had join the diet. So no kibble. I put the bowls in the cupboard.

Tonight, I was in a hurry when I dished up their dinner and forgot to shut the cabinet door.

When I got back to the kitchen, this is what I saw. 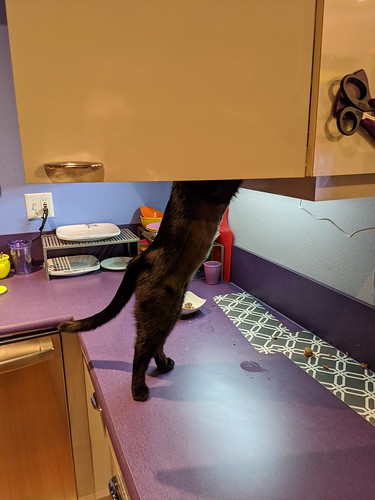 This is what he was helping himself to. 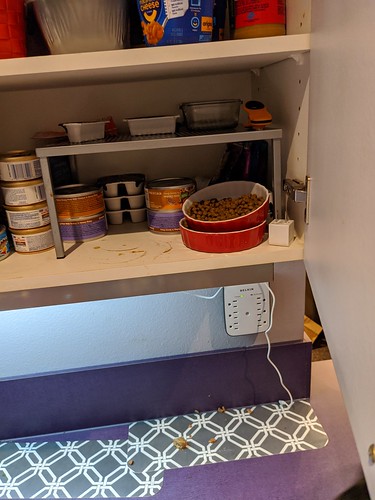 A thrill a minute around here. I did give him a handful of kibble. The Smalls was not interested.

Never a dull moment with these two.
Collapse