There are several regulars that have yet to come back to the gym. One guy who rarely every missed a 5 am start and actually lives in the building's apartments, has not been back. Susie, the Korean woman who came Mondays, Wednesdays and Fridays hasn't been back BUT she did say they were going to Korea this fall for a month so maybe they already left. The guy in the gynormous blue swim trunks who did the hot tub every morning at 5:45 is still MIA. Oh and Michael and Karen who where there most days... haven't seen hide nor hair. Wonder if any of them will ever be back.

The cooler mornings are welcome but they aren't quite cool enough yet. Both cats decided that 4:25 was the time for us all to get up today. They have been hard at work all morning. Just now I was in the bathroom sitting on the john when they both came in and Biggie even brought in Stickie. Thoughtful little bugger that one.

They are in for a treat today. The house cleaner will be here and they are so ready to help. I don't have a lot to do while I'm staying out from under her feet. I have a nice load for Goodwill.

This morning, while I was swimming, I mentally created my next Goodwill load. I have drawers of stuff in the sewing room that I have not touched in more than a year. I think it's time to share that wealth. I think I can even eliminate one of the the drawer units all together. I really would love to have shelf and drawer space to spare and I know I can get there.

Last night, one of the Mariners high round draft picks finally made it to the big leagues. His parents were in the stadium cheering him on. He totally bobbled a catch and allowed a run. And then he struck out. And then, he hit a home run to tie the game. The tv production people did a wonderful job of recording it all - the ball going into the bullpen where the Mariner relief pitchers scrambled to save it - the joy and satisfaction on the guy's face as rounded the bases - the reception by his teammates back in the dugout which seemed to go on forever ... but the very best was the reaction of his parents. This season and many seasons of being a Mariner fan leaves me hating the game but that kind of thing flips that switch pretty fast.

The boys were cuddled in their bowl until a few minutes ago when, apparently, it became time to play chase. Now they are on a break grabbing some kibble. Busy Busy Busy 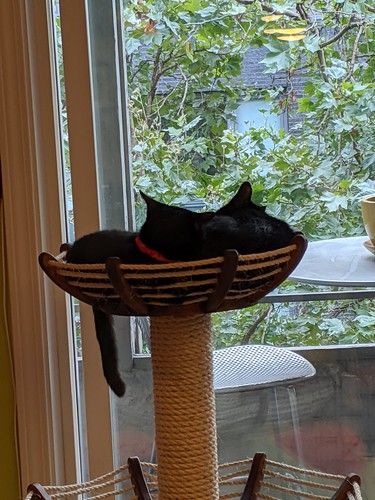 I scored a couple of great things at Goodwill after wandering around there a bit. They moved some stuff around, I suspect in order to batten down the hatches for the Halloween avalanche. But, for me, it just meant more wandering which was perfect as I was really kind of out of things to do to keep out of the house cleaner's hair.

And, then, I remembered flu shot!! Actually I remembered that Bartell's (a local pharmacy/lots of other stuff chain) might have their Bachs candy pumpkins out but on the way there, I thought -perfect time to get my flu shot. Turns out, no pumpkins but plenty of flu shots. I only got one. But now I'm done. yeah.

The boys are trying to figure out if that big fly they see is inside the window or outside. They keep going out on the terrace and then back in here and out again... They are cracking me up. 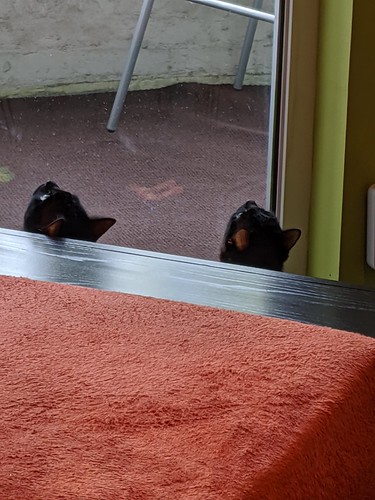 They are so hilarious.

I think it's going to be Trader Joe's orange chicken for dinner. And then the baseball game.
Collapse