Yesterday's walk was really miserable. It was later and partially in the sun. The heat and the glare really bother me. I didn't even make it to 30 minutes. Today, I hit the pavement as soon as I woke up and it was better. I did 30 minutes but while better, it was still a bitch. I don't know what it is. Lazy, I guess. But ugh. I was even partially distracted by the good book I'm listening to. The treadmill is really easier - maybe it's the same same of it - kind of the opposite of distraction.

My nephew's wife - Cyndi's parents are retired. Younger than me. Her mother gets out and does stuff but her father, apparently, does not and has no interest. No interest in travel. No interest in getting out and seeing people and going places. He does love books and enjoys a good book sale and the hunt for a particular volume. But, otherwise, he sits in his chair - happy and chairful.

Not long ago, my brother made a, not unkind, crack about my being like Cyndi's dad. Happy in my chair.

I was immediately offended. I'm not a dull, loner, chair sitter!

But, wait. Guess, what? I am!! Maybe not dull but I do spend an enormous amount of time ass to this particular cushion. I've traveled enough. I don't have a lot of friends and I'm ok with that. I don't really feel anti-social but I also don't feel the need to be around tons of people.

And, I'm now perfectly fine being like Cyndi's dad!

Except I know the walking - as horrible as it is - does help with the rest of everything else. After the pool opens again and I can start swimming, I'm still going to have to walk. But it will be cooler out and I won't have to do the full 30 minutes.

The cats are deeply into a game of tag/hide and seek or something. They've been at it for an hour. I'm so glad I got the two of them instead of just one. They are great entertainment for each other as well as me. 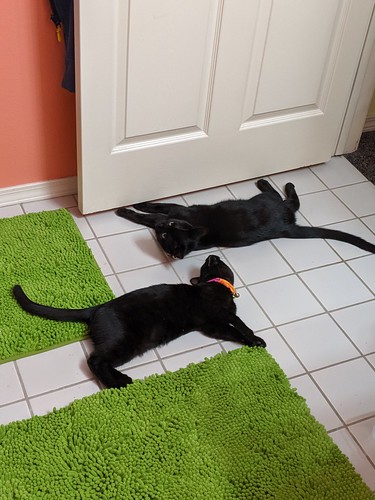 Also, I think there is a whole lotta Siamese in these two. 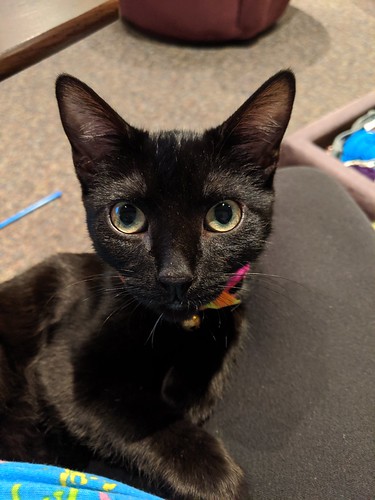 The shape of their heads is very Siamesian. Biggie isn't a talker but The Smalls can hold his own in a conversation. But, mainly, and delightfully, they don't shed!!! I've never had a cat that didn't make mess leaving cat hair everywhere. At first I thought it was because these two were kittens and sometimes kittens don't shed. But, now they are well past the shedding age and they are not. It's wonderful!

A long while back, LJ added the 'like' function. I, personally, find it really helpful. It saves me, often, from having to make stupid comments just to acknowledge an entry or a thought. Plus, their notification of 'likes' on my own entries sucked. I'd get an email telling me my entry was liked but not by whom. So dumb. But, now, thanks to

One thing that is not fixed is the premature 'saving' of my own comments. Often I'll click on a comment in email and it takes me to the entry page with an open comment box. I'll type in one or two letters and LJ will publish the comment! WTF? Then I have to go back and edit which is tres lame. Also this happens when I'm in an entry and click on add photo or video and select the LJ scrapbook. I have no clue what is happening or why or how to stop it. Software sucks.

I just heard a loud bang in the bedroom ...

Time to go get a shower so I guess I'll investigate on the way.

I just bought a treadmill. I've had my eye on the Bodycraft Space-Walker Walking Treadmill for a long time but it was just too pricey. It's the right size for the only space I have in the house. Plus I like how it looks. Its weight limit accommodates my giantness.

Today, in poking around at treadmill options, I discovered that Costco now has it. And it's now $300 less than it was last time I looked. So after some due diligence with reviews and stuff and I also studied the Costco return policy for buying heavy stuff online, I pulled the trigger. Just as I was finishing up, I remembered my $50 Costco cash card which I totally forgot about when I was buying drugs. It covered the taxes exactly.

whew. Still a lot of cash. And now I have a full book case to find a home for as well as its contents...

I finished my winter quilt. 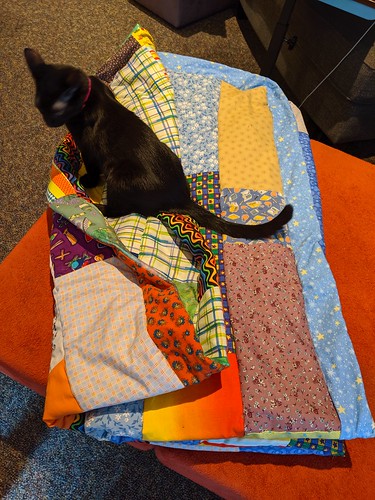 And the Mariners won.

Oh and the cat tree builder says he's shipping my stuff next Wednesday. (He's also very apologetic about the delay which is nice of him.)
Collapse