ljtourist came over last night to see the boys. Left is last night (Biggie). Right is July 5 (The Smalls).

He agrees with me that they are growing closer in size. The Smalls is catching up. I may have to change his nickname to The Equals! Nope. If it weren't for the collars, I'd have lost track of who's who a long time ago. Biggie's on the left here and The Smalls is on the right. 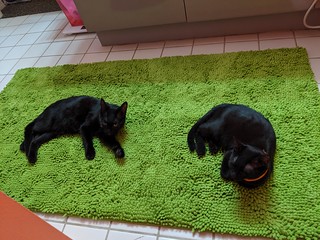 After kitty time, we went down to the street to get a burger. There's a funky place next door - Sluggers - that Frank's never been to and I haven't been in ages. It's a sliver of a sports bar. Probably 12 feet at its widest. It goes the length of the block and two stories up.

However... Frank still hasn't been and I still haven't been in ages... they were closed! We ended up at a place up the street where I had one of the best hamburgers ever on the face of the earth also cooked rare like I like it and Frank had salmon that he said was also delicious. So, thanks, Sluggers! The place where we got these treats is a way too loud restaurant where we've been before. It was also way too loud then but both times, the food has been amazing and different (not my burger but Frank's salad and salmon sides) and the service excellent. I wish they had a quiet room.

Today's baseball game is a perfecta. It's a 4 which is my best baseball time. And it's against Toronto which has all kinds of fun excellent young players we have not seen before - several are the sons of great baseball players. And, finally, the asshole announcer is moving back over to radio and the good guy is moving from radio back to TV so I do not have to mute the TV and stream audio on my phone. Finally. I'm looking forward to the game for sure.

Between now and then is a question mark. I'd really like some Trader Joe's cake but enough to get in the car and go get it when I really don't need anything else? It's cloudy and so maybe I could manage a walk over to Daiso to get some backup Stickie's and a couple of other things on my Daiso list but they do not have air conditioning. It truly feels like Japan there in that Japanese dollar store and I do not mean that in a good way. :) Or I could just cool my jets here and knit which would be fine but lazy.

I do know a shower is next.

I got this strange idea the other day for a dinner dish and made it up this afternoon. I'm calling it Old White Lady Enchiladas.

Ground beef, crumbled and browned with chopped up green onions. A packet of taco sauce and a little bit of water. Once that's all cooked, I spooned a very good sized chub of it into flour tortillas and rolled em up burrito style. Then I took a glass casserole dish and spooned a little salsa (Trader Joe's) on the bottom and lined up the burritos. A little more salsa on top and then buried it all in a mountain of grated cheese. Tonight I will bake it until it bubbles. I have sour cream for serving. Stay tuned for the review.

I wrote to the cat tree guy and asked for an update. He apologized for not being quicker and said that he hoped to get my stuff shipped next week. Me, too!

I did to Daiso and Uwajimaya. It was a little hot but I got back before it got really bad.

I am fanatical about my credit cards. I have 4. A Discover card that I've had forever. A Chase Visa that pays 5% back on Amazon purchases (and I only use it for Amazon). Two Capital One cards - one that pays 4% on food purchases and one for everything else. (Discover and the other Capital One card pay varying percentages of cash back depending on the purchase. And none carry an annual fee.)

I check them all nearly daily and I keep the balances low. When one gets over $100, I pay it back to zero.

Pro tip: If you are trying to improve your credit rating, do not do this. Wait until the end of the billing cycle and pay it then. You want to show a (relatively) big debt that you paid off. My credit rating is fine and has been for many years so I don't worry about it (although I do keep an eye on it always.)

Anyway... When I buy something - online or in store, I always check to make sure I can see it and that it's the correct amount in the Pending section on the card's website.

On Wednesday, I charged my Zappos shoes to my Amazon card to see if they were now part of the 5% Amazon cash back program yet. I charged $116 for two pair. On Thursday, when I returned one pair, an email from Zappos said they have refunded my credit card $60. None of that is showing up on my Chase account. Not the charge or the credit. This morning I bought something on Amazon and used the same card and the charge appeared on the card immediately. Still no Zappos. OCD me is a little freaked by this. And, of course, I need to wait at least 5 business days before anyone - Zappos or Chase - will even talk to me about it.