Getting to the gym this morning was easier than yesterday which was easier than the day before. I'm still only doing 30 minutes of a nice leisurely treadmill walk but it's doable and better than nothing. Tija (the gym owner) told me that 6 - 7:30 was very busy and this morning she was right. By the time I finished - 6:10, all the treadmills were full and the other machines were getting populated.

In a stunning reversal of normal, the Building Manager actually sent a useful, straightforward email yesterday. He let us know that the Rolling Stones will be doing a very loud sound check at the stadium tonight from 7-10. This also served as a reminder that they will be in concert on Wednesday. They concert stage faces away from here so for most concerts/sound checks all we get here is, actually, loud noise. I am, however, looking forward to seeing the parade of old people going into the concert on Wednesday.

My friends from the South Island of New Zealand have their trip for next year all planned and I'm so excited for them. They come every 2 or 3 years and always stop here for 5-7 days and then do New York or California or both. Sometimes, Southern Canada. But this year they are taking a trip I'd almost like to go with them on. 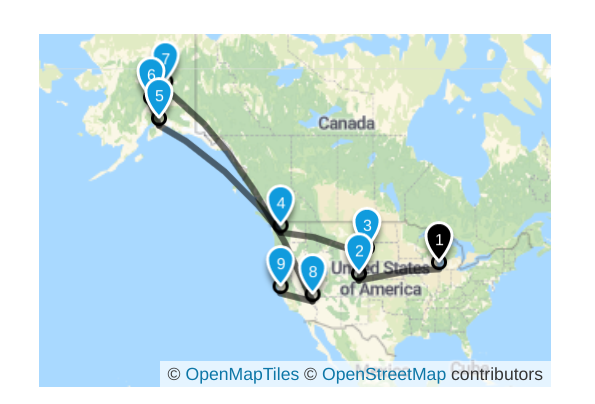 So this time next year, they will have seen more of the United Stages than I have! They get here the week of July 4. This year's Kiwi, comingto Seattle in October, is

Very coincidentally, last night I started watching a funky TV show on Prime - Step Dave. I was having a hard time understanding the accents - even with closed caption turned on until I finally realized it was set in New Zealand. Once I tuned my ear to Kiwi, it was a lot easier to understand what they were saying.

Today I'm going to sew the binding onto the quilt. I got it half done yesterday.

And I need to pick up cat detritus before the house cleaner gets here tomorrow. Otherwise, the day's activities are up in the air. It's going to be warm out, so unless there's a critical need to go get something, there won't be any going anywhere.

There will be a shower, however. Now.

Immediately after writing that I was going nowhere, I got up and went and got a manicure! I remembered a place that I'd had good service before. It's over by the pool so I always close to it but never when it's open. Today I just waltzed in and they took me right away. A lovely young woman 'did' me and did a fine job and gave me a happy ending! While my nails were drying she gave me a shoulder and neck massage. It was wonderful. She also did a great job on my nails. And... she did not speak much English at all so NO CHIT CHAT!!

They look lovely against Biggies butt. 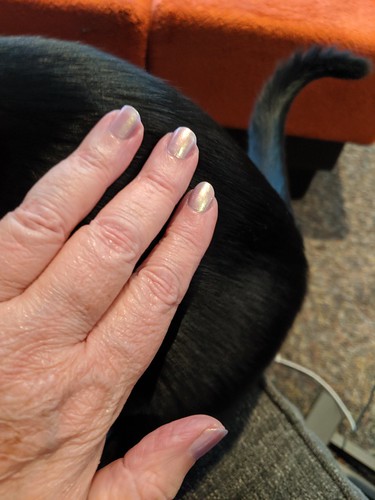 One problem with regular nail polish (as opposed to gels/powders) is curing time. It's so hard to just sit there and not use your hands for as long as you need to for the polish to set. Today, however, I was ready. I whipped out my Kindle and just read for 15 minutes. Now, here I am 5 hours later and there's not a scratch on 'em. Very satisfying. I may well go back again one more time before the pool opens.

I passed by the pool and looked to make sure there were no cars in it. I saw one of my fellow early morning folks standing at the corner. I think he rents an apartment across the street from the gym. An older guy. Really nice.

While I was getting a manicure, an old woman came in for a mani/pedi. She had on a very old Doors t-shirt on. I try to keep in my mind what I must look like to other people. It's very different than what I look like to me. To other people I am a fat old lady. Slow physically and probably slow mentally. But, at least able to get around on her own. And wearing a gynormous watch. The woman with the Doors t-shirt had on a granny watch but otherwise was a fat slow old lady. That t-shirt was a nice touch, tho. Wonder if she has Rolling Stones tickets.

I finished the quilt and I'm very delighted. 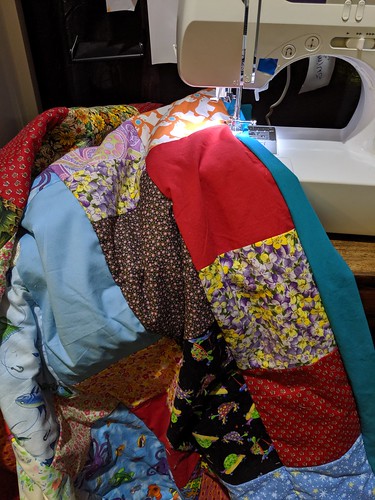 It's exactly the size I wanted. In Summer, particularly, I hate having too much blanket. Plus, I love how it looks on the bed. It could that for winter, I need a little more blanket real estate. I'm sure I will need it thicker. But I can use this one to test out and decide. 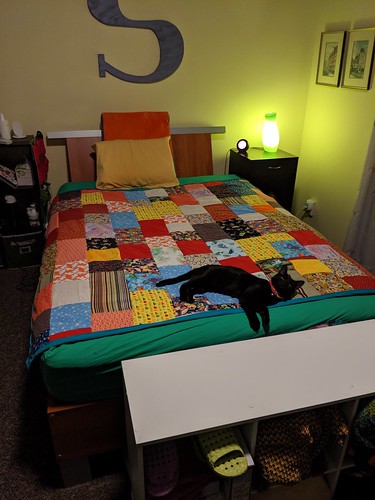 That's The Smalls there testing it out.

The Mariners are playing in Detroit so the 'night' game starts at 4 which is now. Also they are worse than we are so we have half a chance at not losing. yeah?
Collapse