I think the gym thing may work out - especially since it's short term. It's handy to have it just across the street. And it's fun to have an extra hour.

These are the things I try to think about while I'm on the treadmill trying to make it to the end.

Today I wore my Keen sandals with thick socks and everyone - hips, knees, feet - were all fine with that arrangement. So, if I don't love the Zappos shoes I ordered, it's fine. And I have an interesting audio book going - The Silent Patient.

So, yeah, I'd totally rather swim but this will work until I can.

I have not used my own shower regularly in about 5 years since I always use the one at the pool. Yesterday, I decided that it was time for a new showerhead. Of course, I went to Amazon but, for once, it was just not giving me the warm and fuzzy info I wanted. There's a Home Depot about 2 miles down the road so why not do something radical like actually go physically buy one?! It was an interesting and satisfying experience. And I picked good. It's a fancy mofo with options from Drizzle to Buckle Up! And boy have shower heads gotten easier to install. This one didn't even need a wrench. 'hand tighten' OKDOKEY!

This morning, I discovered that making do without a shower curtain liner was probably not that smart ... the litter box is next to the shower and while there is very little litter that gets out, what does is not a good mix with water drops. This time, I'm letting Amazon bring it to me. Today. With cat food.

The cats are playing King on The Mountain with the cat tree bowl again. The Smalls is pretty selfish but also the smarter of the two. When he loses the battle and Biggie gets the bowl to himself, he lets it ride for a bit and then he sits on the other side of the room and stares at Biggie in the bowl. Until Biggie can't stand it and gets down to wrestle.

They are so hilarious. Always. And they need new collars. Again. The Smalls can probably go another week but Biggie's collar is getting pretty darned tight. I'll whip him up a bigger one today.

They let me work on the quilt for a long time yesterday. I now only have three panels left and I have the pieces for 2.5 of them completed. Then it will be time to figure out how to square it off. Then binding time and I'll be done! I'm already thinking about Quilt 2.0.

Last night's ballgame was nice. There was a big ceremony - very nicely done - for Edgar Martinez who went into the Hall of Fame this year. There were a couple of spectacular plays. The people sitting around me were fun. The food was good. But, of course, it's the Mariners so we lost. Oh well.

The green hair dye arrived. I may give that a try today. I'll watch the game and maybe, kittens willing, I'll work on the quilt.

And, finally, there's a woman who sits in front of me at every game. She always has the most magnificent shirts. Most of them are not even as simple as this one but all of them are out of the prettiest most fun fabric ever. I'd love to make a quilt out of the shirts in her closet. Here's last night's edition: 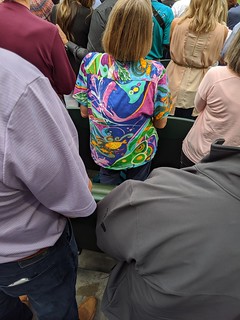 I was in the bedroom running the hooks through the new shower curtain liner with both cats helping. The Smalls started honking, coughing a little. He did it once and then some time passed but when he did it again,Biggie hopped down off the bed immediately and went to check on his brother. He put his nose right in The Small's face until the coughing stopped. It was so sweet.

I heard The Smalls do this once several days ago. Today it was really only two honks. I'm hope hope hoping it's nothing.

Turns out that Amazon is now delivering Zappos! Makes sense but still kind of shocking. On the up side, my order was scheduled for Tuesday delivery but Amazon says it will be here tomorrow! Next up, I hope, Amazon credit card cash back rewards... When Amazon first bought Zappos I was so worried they would fuck it up but it's been at least 10 years - yep exactly 10 years - and they haven't fucked it up yet.

My calves are not wild about this walking on the treadmill thing either, turns out. We're all suffering from pool closure - sigh.

Biggie was trying to help the Mariners out this afternoon. 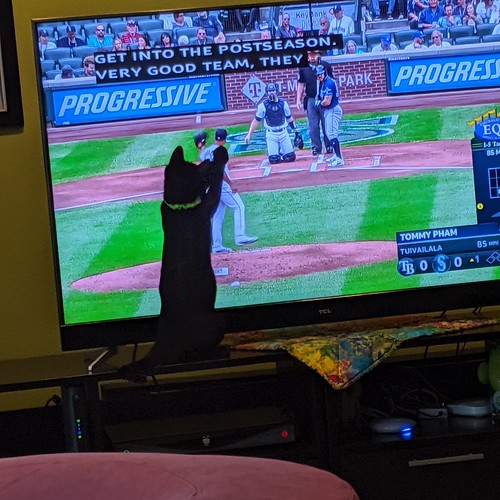